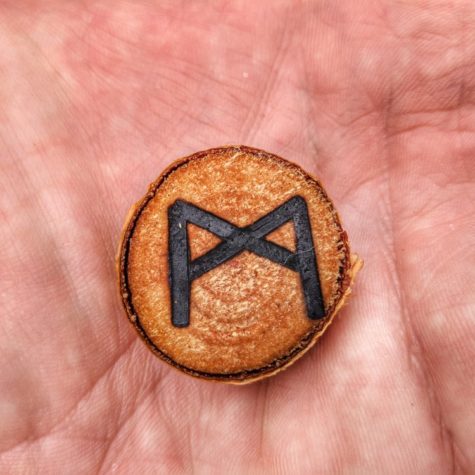 Mann helps in knowing oneself. It can therefore be used in mediation, to increase dreaming, or to enhance the truth of dreams. It can be used in conjunction with other runes to personalize matters or magick for (or on) a particular individual. It is also useful for cleansing oneself, a ritual which makes the afterlife more pleasant.

In Odin’s poem of runes, the second is one that must be learned by anyone who hopes to be a healer. Without knowing the patient, no healing is possible.

Mannaz is the symbol of mankind as a whole and is often used when assistance from others is needed. It also symbolizes the powers of the rational mind. To gain the assistance of others. Increase in memory and mental powers.

Realization of the divine structure in mankind. Increase in intelligence, memory, and mental powers generally. Balancing the “poles of personality”. Unlocking the mind’s eye.

Be happy in life.
Bring happiness to your friends
and relations.
Yet be aware that death is always waiting.