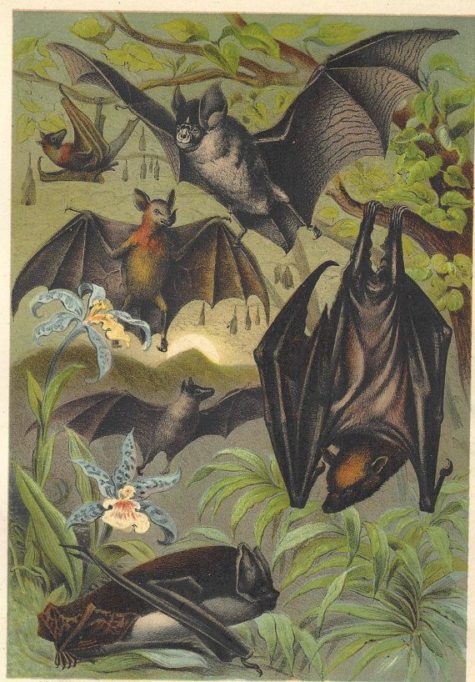 In the hoodoo tradition, the reference to Bats or Bull bats refer to the following:

Bats are under devastating ecological pressure from human beings who destroy their habitats, so no reputable spiritual supply house will carry Bat body parts, but Devil Pods (Bat Nuts) can be substituted. Bat’s Blood ink, used in pact-making, was once truly the blood of a Bat, but since the 1920’s, it has been a mere brand name for red ink scented with herbal essences. A recipe for Bat’s Blood Ink can be found here: Magickal Apothecary.

A bat heart, a whole dried bat, a bat wing, the wing-feathers of a Bullbat, or a drop of Bat blood kept in a vial of perfume are all considered lucky for gambling, especially when wrapped in red flannel or red silk and tied to the upper arm, or carried in a mojo in the arm-pit.

The Bullbat is said by some to portend death if it flies into a house, but folks of European descent say that of all birds, not just Bullbats. Omens and signs associated with bats can be found here: Bat Symbolism, Mythology, and Lore. For information on Bats as an Animal Totem or Spirit Helper can be found here: The Bat.

The Four Bats of Happiness:

In China, the Bat is lucky because the Chinese word for Bat (“Fu”) sounds like the word for “Happiness.” Fortunate is the family that plays host to the four bats of long life, health, children, and wealth. Bat Nuts symbolize happy Bats in China.

Bat wing is also the nickname for holly leaves, a plant of good fortune, doubly enhanced by its resemblance to the flying mammal’s wings. And even if the spell calls for an actual bat wing, holly leaves can be effectively substituted.

Place a pair of bat wings (holly leaves) in a red conjure bag together with a High John the Conqueror root and a matched pair of lodestones. Sprinkle with lily pollen, if possible, and/or magnetic sand periodically for enhanced power.

In both ancient Greece and Rome, it was thought that sleep could be prevented either by placing the engraved figure of a bat under the pillow, or by tying the head of a bat in a black bag and keeping it near to the left arm.  In Hesse, he who wears the heart of a bat bound to his arm with red thread will always be lucky at cards.

Bat magic can also be an antidote to sleepiness. In both ancient Greece and Rome, it was believed that you could prevent sleep either if you placed the engraved figure of a bat under your pillow, or if you tied the head of a bat in a black bag and laid it near your left arm. In many parts of Europe, a practice said to ensure not only wakefulness, but also to protect livestock and prevent misfortune is to nail live bats head down above doorways. Not for the faint of heart, this practice was reported as recently as 1922 in Sussex, England and may indeed continue today.

Canadian Indians relate that bat “medicine” can also bring about the opposite effect of staying awake; traditions claim that placing the head or dried intestines of a bat in an infant’s cradle will cause the baby to sleep all day. In a similar vein, Mescalero Apaches believe that the skin of a bat attached to the head of a cradle will protect a baby from becoming frightened.

Bats have also been said to induce love or desire. In Roman antiquity, Pliny maintained that a man could stimulate a woman’s desire by placing a clot of bat blood under her pillow. In Texas, one lovesick suitor was told to place a bat on an anthill until all its flesh was removed, wear its “wishbone” around his neck, pulverize the remaining bones, mix them with vodka, and give the drink to his beloved. A similar love potion from Europe recommends mixing dried, powdered bat in the woman’s beer.

Bat hearts or bones are often carried as good luck charms. Variations on a belief that apparently began in Germany, and have been repeated in the United States, predict that bats bring good luck at cards or lotteries. The prescription is to wrap a bat’s heart in a silk handkerchief or red ribbon and keep it in a wallet or pocket, or tie it to the hand used for dealing cards. Some also believe that tying a silk string around a bat’s heart will bring money.

Another superstition from Germany relates that bullets from a gun swabbed with a bat’s heart will always hit their target. According to the Egyptian Secrets, attributed to Albertus Magnus in the 13th century, mixing lead shot with the heart or liver of a bat will have the same result. Some American Ozark pioneers had another variation of this belief: they carried the dried, powdered hearts of bats to protect them from being shot and to keep wounded men from bleeding to death.