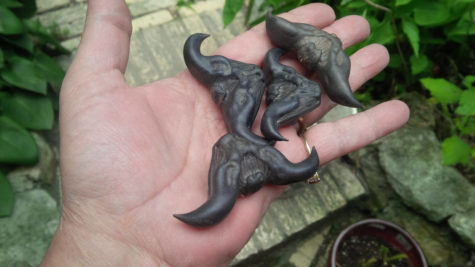 The Devil Pod, also known as Bat Nut, is the seed pod of Trapa bicornis, an aquatic Asian plant. Glossy and black, it averages 2 1/2 – 3 inches from tip to tip, and when dried and oiled, its surface texture is similar to that of a chestnut or buckeye.

However, depending on the way it is viewed, this naturally sculpted botanical oddity looks like nothing so much as a leering goat-horned devil, an enraged bull demon, a flying bat, or an alien chupacabra! The illusion of an evil face appears on both sides of the pod, and the two faces are usually quite different in visage.

In China, the Bat is a lucky animal, because the name “Bat” (Fu) sounds just like the word for happiness (Fu), so to the Chinese, who know this plant as the Ling Nut, the image it shows is of a Bat and it is considered a lucky food to eat, and an extremely lucky curio to possess.

Although the seed inside the pod is edible when cooked, the Bat Nut’s rarity in the United States and its bizarre shape have led to its use as an offering on altars to some of the darker gods. While it is not native to Africa, Europe, or South America, it would not be out of place on a modern altar dedicated to chthonic tricksters such as Eshu-Ellegua-Legba of West Africa, Hades-Pluto of the ancient Mediterranean, or Maximon of Guatemala.

In the South, folks have long used the Devil pod to ward off evil, and for that purpose they place it above a doorway, facing outward as an apotropaic charm, much in the manner of a Roman Janus or Tibetan door demon. Likewise, it makes a splendid inclusion in mojo bags of the types commonly known as “Jinx Breaker,” “Keep Away Enemies,” or “Run Devil Run.”

Some people also like to carry a Devil Pod in a red flannel bag and anoint it with Uncrossing or Cast Off Evil Oil when they are surrounded by enemies.

Devil Pod is an edible, nutritious food if steamed or roasted like a Chestnut while it is still fresh from the water.

Bats are under devastating ecological pressure from human beings. Bat Nuts are a good and effective substitute for any kind of magick that calls for the use of Bats.