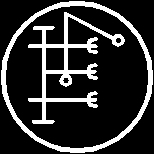 The Thirty-Fifth Name is ZULUMMAR.

Continued evocation of this Spirit over a period of several weeks will increase vitality and vigor in the weak and sickly. It will add luster to the health and strength of the strong.

Promote Your Page Too
Breadcrumbs
A trail of breadcrumbs in case you lose your way... Sigils Symbols and Signs > Newest Symbols > Necronomicon Symbols > Zulummar