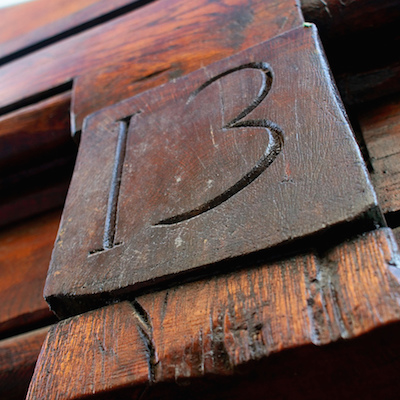 Thirteen has long been regarded by many as an unlucky or inauspicious number. The Kaballa, for example, says that there are 13 spirits of evil. It’s still considered unlucky to have 13 people sitting down to dine because it is a reminder of the Last Supper, where Christ was betrayed by one of the 12 disciples who were eating with him, Judas Iscariot.

Similarly, in Norse mythology, when an honorary banquet was held in Valhalla for Baldur (god of nobility, redemption and admirable strength) among other twelve Norse gods. Loki (the trickster) came to the banquet as the uninvited thirteenth guest. Afterwards, we learn Baldur was slain by Hoor who, to execute the god, was given a magic spear by Loki.

Further, Friday 13th in 1307 was the date on which the assembly of the Knights Templar were systematically assassinated.

However, it’s not all black for the number 13. Despite the year being divided up into 12 calendar months, there are actually 13 lunar months, or 13 sets of 28 days in a year. Therefore the Mayans regarded 13 as an auspicious number. There is also said to be a secret, hidden, thirteenth sign of the Zodiac, Arachne, the spider goddess whose web binds the network of the Heavens.

In ancient cultures, the number 13 represented femininity, because it corresponded to the number of lunar (menstrual) cycles in a year (13 x 28 = 364 days). The theory is that, as the solar calendar triumphed over the lunar, the number thirteen became anathema.

In Classical Antiquity, the thirteenth member of a group was considered to be the leader, the exalted one. Zeus sits at the head of the 12 Olympian deities, for example, in the same way that Christ sat among his disciples or King Arthur with his twelve knights at the Round Table. A coven consists of 12 members plus a leader.

In Greek mythology, the thirteenth in a group appears as the most powerful and the most sublime. For example, Ulysses, the thirteenth of his group, escapes the appetite devouring of the Cyclops.

In addition, a baker’s dozen is one more than 12, so 13 effectively represents good value for money. This stems from medieval England when bread was a scarce commodity and punishment was harsh for bakers who short-changed their customers. Therefore they would give away a free loaf with every 12 sold to make sure that no mistakes were made.

The Apollo 13 moon landing was beset by bad luck, and an explosion could have resulted in disaster. However, no one died and the crew returned to Earth safely, so it could be said that the number 13 was lucky for them.

In Hindi, it’s called as ‘Terah‘, which means ‘your’s’. It represents your karma. In the spiritual context, it could also mean that every thing belongs to one God/Creator including the soul present in every human being.

According to famous story of Guru Nanak Dev Ji, when he was an accountant at a town of Sultanpur Lodhi, he was distributing grocery to people and when he gave groceries to the 13th person he stopped there because in Gurmukhi and Hindi the word 13 is called Terah, which means yours. And Guru Nanak Dev Ji kept on saying, “Yours, yours, yours…” remembering God. People reported to the emperor that Guru Nanak Dev Ji was giving out free food to the people. When treasures were checked, there was more money than before.

The number 13 is shown in several places on the United States’ currency bills, and in this instance there is no hidden sinister meaning; simply, there were 13 states that joined the original Union.

In the Tarot, 13 is the number of the Death card. It symbolizes the death to the matter or to oneself and the birth to the spirit: the passage on a higher level of existence. This represents initiation, a test, and facing fears. It is a number that cleans and purifies.

If we are looking at the Zodiac, a clock, and even the months of the year it can be said that 13 is the number of eternal return. How is this so? 12 + 1 = 13, therefore, the thirteenth hour (month) is also the first.

The number 13 in the Coperos religion (small culture in Brazil) is like a God number. All coperos must know that this number can save humankind.

According to R. Allendy, this number “represents a principle of activity 3 exerting in the Unit of a whole 10 which contains it and which makes it produce only one cycle of perpetually identical renewal (1 + 3 = 4). Or it is the mechanism of its organization which submits the Universe to a permanent mode of oscillations and which leads it to specialize in nature.”

Thirteen is the number of skies for the Aztecs, and the heir of the Ancient of Days had thirteen buckles and his beard thirteen wicks. The ancient Mexico divided also the time in cycles of 52 years divided themselves in four periods of thirteen years. They had also a week of thirteen days. Thirteen was also, for the Aztecs, a time number, which represented the completion of the temporal series.

In ancient Egypt, the number thirteen was held to be the precursor to completion,  there are thirteen steps upon the ladder that leads to eternity. Upon the thirteenth step it is said the soul reaches the source of itself and attains spiritual completion.

This can be seen in the story of Osiris (the Egyptian god of life, death and powerful solar symbol) who was murdered by his brother Typhon. Typhon stole Osiris’ body and cut it into fourteen pieces and scattered them about the earth. Isis, Osiris’ wife and sister collected his body with intent to restore Osiris back to life. In her quest to revive her beloved, Isis was only able to reclaim thirteen of the fourteen body parts (the fourteenth part being Osiris’ penis which interestingly fell into the Nile and was eaten by a school of fish).

In mathematics, the number 13 is the sixth prime number, and the smallest emirp (a prime that is a different prime when reversed). It is also a Fibonacci number, a happy number, the third centered square number, and one of only 3 known Wilson primes.There are 13 Archimedean solids, and a standard torus can be sliced into 13 pieces with just 3 plane cuts. There are also 13 different ways for the three fastest horses in a horse race to finish, allowing for ties, a fact that can be expressed mathematically by 13 being the third ordered Bell number.

Evidently, ancient Iranian civilization and Zoroastrianism considered the number 13 sinister. Since the beginning of Nourooz tradition, the 13th day of each new Iranian year is called Sizdah Be-dar. This tradition is alive among Iranian people both inside modern Iran and abroad. Since Sizdah Be-dar is the 13th day of the year, it is considered a day when evil’s power might cause difficulties. Therefore, people desert cities and urban areas for that day and camp in the countryside. Even in the current era, after the 1979 Revolution, and against the wishes of the Islamic government, this day is an official holiday in Iran and a majority of people honor its traditions.

Fear of the number 13 has a specifically recognized phobia, Triskaidekaphobia, a word which was coined in 1911. The superstitious sufferers of triskaidekaphobia try to avoid bad luck by keeping away from anything numbered or labelled thirteen. As a result, companies and manufacturers use another way of numbering or labeling to avoid the number, with hotels and tall buildings being conspicuous examples (Thirteenth floor).

Colgate University considers 13 a lucky number. They were founded in 1819 by 13 men with 13 dollars, 13 prayers and 13 articles. To this day, members of the Colgate community consider the number 13 a good omen. In fact, the campus address is 13 Oak Drive in Hamilton, New York, and the male a cappella group is called the Colgate 13.

Some superstitions associated with the number 13 include the following:

To see a black cat on Friday 13 leads to misfortune. It is preferable not to go out on that day, but if one leaves by a door, it is always necessary to enter by the same door. The superstition of Friday 13 was also revivified in this era of the computer by some viruses introduced into the computer systems appearing only on Friday 13.

Compiled from various sources including:
Element Encyclopedia of Signs and Symbols