The symbolism of the Poppy varies greatly from country to country, but most of them share at least one or two common meanings for this particular flower. Here’s a basic list: 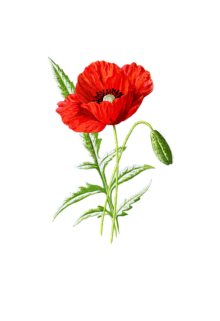 Poppies have long been used as a symbol of sleep, peace, and death: Sleep because the opium extracted from them is a sedative, and death because of the common blood-red color of the red poppy in particular. In Greek and Roman myths, poppies were used as offerings to the dead. Poppies used as emblems on tombstones symbolize eternal sleep.

This symbolism was evoked in the children’s novel The Wonderful Wizard of Oz, in which a magical poppy field threatened to make the protagonists sleep forever.

The most common opiates – heroin and morphine – come from the opium poppy, Papaver somniferum. Morpheus, the Greek God of sleep, counts these drugs among his attributes, as does Demeter in her guise as Goddess both of the harvest and of death.

The story goes that Somnus, the God of Sleep, made the poppy specifically for Ceres because she could not sleep after she lost her daughter, Persephone. Ceres was so wearied by the search for her lost daughter that she could not get the corn to grow. To save mankind from starvation, Somnus gave her poppies to make her sleep. After she had rested, her strength returned, and the corn grew again. Because of this, in ancient times, it was thought that the presence of poppies in a cornfield was essential to the welfare of the corn. It is still counted as good luck to see poppies in a cornfield.

Because of its reputation as a flower that can either cure or kill, there is an ambiguity about the poppy; some see it as a good influence, and some as evil.

In Oxfordshire, it was said to be unlucky to bring wild poppies into the house and, according to some, it was better not to pick them at all. The ban on their presence indoors does not seem to be a general one, but the flower has an evil reputation in many areas as a cause of minor ills.

In the old days, in England, children would  say that if anyone looked into the heart of a poppy, he or she would go blind, temporarily. In Yorkshire, where it was sometimes called Blind Bluff, this was said to be due to the dazzling effect of the intense scarlet color. Another Yorkshire name was Head-waak, because the smell of the flower was supposed to cause headaches. They were also said to produce a violent earache if held against the ear.

Where the poppy head appears in paintings, it often symbolizes fertility. Poppies are associated with fertility because of their many seeds, and the same seeds were used to flavor foods, and given with wine and honey to ancient Greek athletes training for the Olympic Games.

Following the trench warfare which took place in the poppy fields of Flanders during World War I, poppies have become a symbol of remembrance of soldiers who have died during wartime. 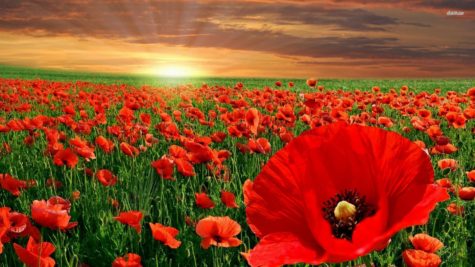 The poppy as a symbol of grief for lost warriors is not new; in the Iliad, written in the eighth century BC, a description of a dying warrior compares him to a poppy.

A second interpretation of poppies in Classical mythology is that the bright scarlet color signifies a promise of resurrection after death.

The leaves of the poppy are a divinatory tool; when placed beneath the pillow they are said to give the sleeper dreams of the future. 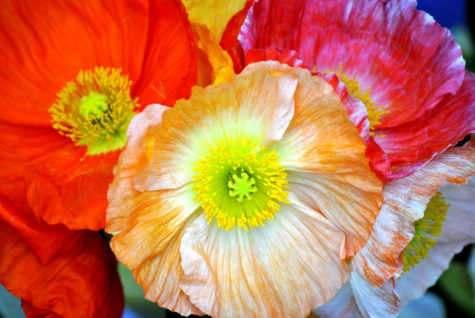 According to the Language of Flowers, sometimes called florigraphy, a Victorian-era means of communication in which flowers and floral arrangements were used to send coded messages, allowing individuals to express feelings which otherwise could not be spoken, poppies have the following meanings: 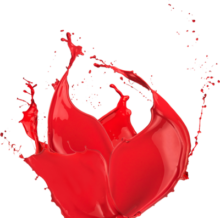 Symbolic Meanings of the Color Red:

One of the three primary colors, bright red pops out of whatever environment it happens to be in and grabs our attention more than any other color. Moreover, it is the first actual color that is seen by babies.

Because it has a lower vibrational frequency than any other color in our visible spectrum, it is associated with the Root Chakra and symbolizes passion, sexuality, fertility and animal urges. Red-light districts are so called because of the dim red shades of the prostitutes’ quarters. 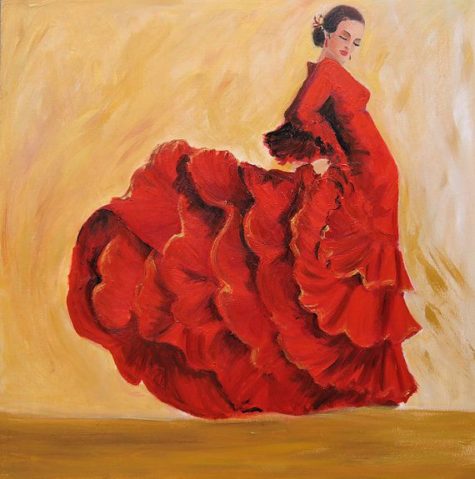 Red is the color of blood, which means that it is associated with the life-forces and vitality. Hunters would daub themselves in the red blood of the kill, which they believed would give them empathy with the spirit of the animal. Red is also the color of fire, the Sun and the Southern direction.

The word for “magic,” in German is directly linked to the word for “red ochre.” A recent archaeological discovery provided unusual evidence of the reverence in which the color was held by early man. Lumps of red ochre, as well as tools stained with the substance, were found in early graves in an Israeli cave, indicating its importance as a symbol of vitality, life, and resurrection.

Pure colors used to be very difficult and expensive to produce, and so red cloth was used by people in positions of power, such as the monarchy and the clergy. Byzantine emperors were dressed from head to food in red. In Rome, red was the color of nobles and generals, and the Holy Roman Church still dresses its cardinals in pure, bright, cardinal red. To roll out the red carpet for someone is to honor their presence.

Red is the color of protection and has been viewed as such for at least the last 2000 years. Amulets made from rubies or garnets were far more valuable than any other kind, able to make the wearer invincible. 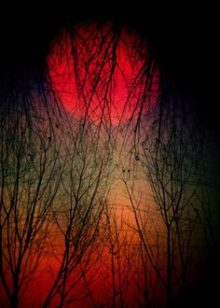 And then there is the red planet. Mars has a preponderance of iron oxide in its soil that gives it a red appearance that is clearly visible to the naked eye. This color is partially responsible for its association with war and warriors.

In India and China, red is the traditional color for weddings. Indian brides wear saris of red or pink, and the Chinese happy couple will be surrounded by a veritable sea of red, clothing, souvenirs, and gifts. Even the home of the bride and groom are decorated with red banners and ribbons. Roman brides, too, favored red for their wedding veil, which was called a flammeum. This tradition is shared by modern Greek brides.

The red envelope is a popular Chinese symbol for happiness. It has been a long-standing belief that red envelopes bring happiness, good luck and prosperity. In fact the color red stands for all these, in itself. So the person gifting these wishes the person receiving it to be bestowed with all these things.

By contrast, red is the color worn by mourners in South Africa. Red was also the color of the communist revolution in Russia, and so politically it is associated with communist causes.

In Ancient Egypt red was synonymous with evil, because it was the color of the God Seth, who haunted the arid desert places, the personification of destruction. Seth was called the “Red God,” and an Egyptian charm of the time goes like this:

Oh, Isis, deliver me from the hands of bad, evil, red things!

Similarly, in Christian symbolism, the Devil is sometimes depicted as a red creature. Like Seth, he also has a predilection for scorched places. 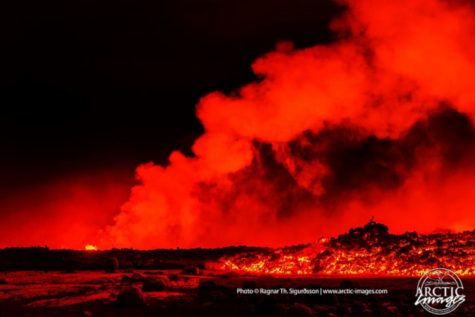 In alchemy, the Red Stone is mercuric sulfide, a compound of sulfur and mercury that is also called vermilion. The creation of vermilion was a very important primary stage in the process of making the Philosopher’s Stone, which is itself disguised as the Red Lion, since this elusive substance was characterized by turning red in its final stage.

Other meanings associated with the color red: