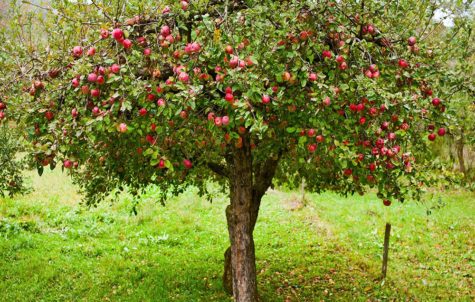 The apple tree seems to have been regarded as holy or magickal from very early times, and in almost every country in which it grows.

In ancient Ireland, it was one of the three things that could only be paid for by living objects, the others being a hazel bush and a sacred grove.

For Celtic people, the apple tree symbolized the World Tree, the axis of the Universe. They considered the apple the most magickal of fruits, a fruit of immortality and prophecy.

It grew in the Celtic Paradise, where the hills were clothed with trees that bore fruit and blossom together. The mysterious land to which King Arthur was taken for the healing of his wounds was the Vale of Avalon, the Apple Vale. The mythical Isle of Avalon, meaning orchard (from afal, the old Welsh word for apple) is the resting place of Celtic kings and heroes, and one of the places where King Arthur is meant to wait until he is needed to rise once more to protect his people.

The apple tree is a tree of the Underworld, a tree of immortality, and sacred to Apollo.  At Samhain or Halloween, the time of the apple harvest, the fruit has a large part to play in the rituals and celebrations, including divinatory practices.

Old laborers in Herefordshire regarded the destruction of an apple orchard as an almost sacrilegious act. It was commonly said there that if an orchard was destroyed to plant a hop yard in its place, the latter would never pay the cost of cultivation.

At that time there was also a custom whereby, if a man wanted to enclose a piece of common land, he had to plant an apple tree on it. The lord of the manor preserved his rights over the enclosed land by extracting an annual tribute of the fruit. 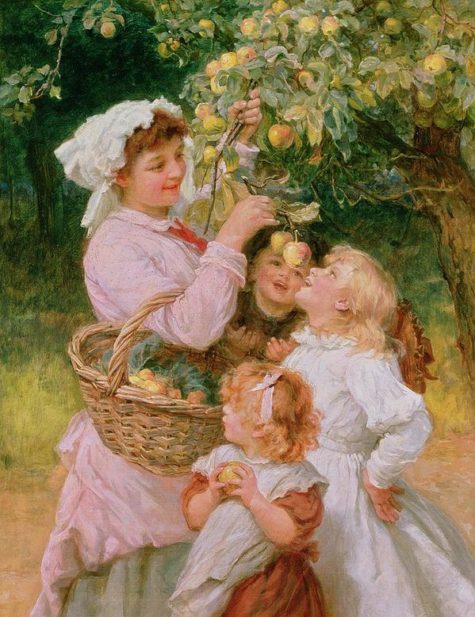 Many omens and charms are, or were, associated with apple trees. Here are some of them:

A bloom on the tree when the apples are ripe
Is a sure termination of somebody’s life.

If, when the fruit is picked, an apple is left behind and hangs there until Spring comes round again, a death is foretold.

There was, however, a Yorkshire variant of this belief. In his Folk-Lore of East Yorkshire (1890) John Nicholson tells us that it was sometimes thought unlucky to strip the tree completely. An apple or two, even if only the deformed or inaccessible fruit, should be left for the birds. This was the explanation given in his time but, as he points out, the gift may originally have been intended for the fairies, and some even older spirits.

The banyan, or Ficus religiosa, is also known as the vata tree, the bodhi tree, or the Asiatic fig, is one of the trees considered to be the World Tree by the people who revere it. It is considered sacred by the followers of Hinduism, Jainism and Buddhism. In the Bhagavad Gita, Krishna says,

“I am the Peepal tree among the trees, Narada among the sages, Chitraaratha among the Gandharvas, And sage Kapila among the Siddhas.”

This tree is particularly special because the Buddha happened to be sitting underneath one when he was suddenly illumined as to his true nature – the word bodhi means “enlightened.” Although the particular tree under which he was enlightened is no longer living, a cutting was taken in the second century BC by a Sri Lankan princess, and this tree now grows in Anuradhapura in Sri Lanka, where it is the object of pilgrimage. Known as Jaya Sri Maha Bodhi, it is the oldest flowering plant in the world.

Not all Ficus religiosa, (or Banyan trees) can be called a Bodhi Tree. A Bodhi Tree must be able to trace its parent to another Bodhi Tree and the line goes on until the first Bodhi Tree under which Gautama is said to have gained enlightenment.

The banyan can be found anywhere in the world where Buddhism or Hinduism are practiced, and it is often grown near temples. Vishnu, the Hindu God, is often depicted as sitting under a banyan dispensing teachings of philosophy and science to his students.

The tree grows in quite an unusual way with its roots reaching down from its branches which then take hold in the ground. This is why the banyan is sometimes called the “walking tree” or the “tree with many feet.”

The structure of the tree, which is a little like a strange organic building that casts a deep shade, makes it a perfect place to meet, and village councils in India (whose national symbol it is) still meet under these trees to discuss important matters. 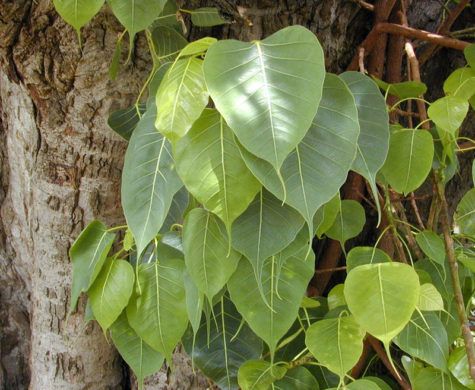 The leaves of the banyan move continuously even when the air around is still and no perceptible wind is blowing. This phenomenon can be explained due to the long leaf stalk and the broad leaf structure. However, religious minded people in Hindu/Buddhist religion attribute this movement of the leaves to the fact that “devas” or “gods” reside on these leaves and make it move continuously.

Although it is sacred, it is said to shelter many different kinds of spirits, and so it is considered unlucky to sleep under one at night.

Sadhus (Hindu ascetics) still meditate beneath sacred fig trees, and Hindus do pradakshina (circumambulation, or meditative pacing) around the sacred fig tree as a mark of worship. Usually seven pradakshinas are done around the tree in the morning time chanting “vriksha rajaya namah“, meaning “salutation to the king of trees.”

According to Vedic astrology, the 27 stars (constellations) constituting 12 houses (rasis) and 9 planets are specifically and precisely represented by 27 trees—one for each star. The Bodhi Tree is said to represent Pushya (Western star name γ, δ and θ Cancri in the Cancer constellation).

Sources: Wikipedia
And The Element Encyclopedia of Secret Signs and Symbols 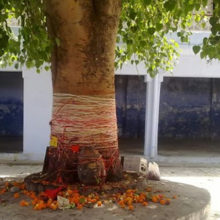 One of the most arresting sights while travelling in India are tree trunks, curiously bound by cotton threads. Most tourists do not see how these threads come to be there and have no idea why they are there in the first place.

Let me try to explain.

On certain days of the year, Hindu women will fast and pray for their husband’s long life. As part of the rituals, requesting health and well being of the husband, a married woman walks 108 times around a Pipal tree ( also known as the bodhi tree), tying an unbroken length of cotton thread around its trunk. The women recite prayers as they walk around the tree.

The bodhi tree represents the tree of life. For millenniums, it has supported life of all sorts and for this reason, it is considered to be sacred and must not be cut or harmed in any way.

The cotton thread represents the fragile nature of life, love, trust, faith – and all things that go on to make up a relationship. A single thread may be weak, but, when it is wound 108 times around the trunk, it becomes strong. It is no longer so fragile and no longer easy to break.

By walking around the tree 108 times, the wife contemplates on these matters. Love can only be strengthened by trust, faith and desire to make it work ! With each step, the woman strengthens her relationship with her husband. She prays not just for her husband’s long life, but an enduring relationship that will last beyond this life and into the next. 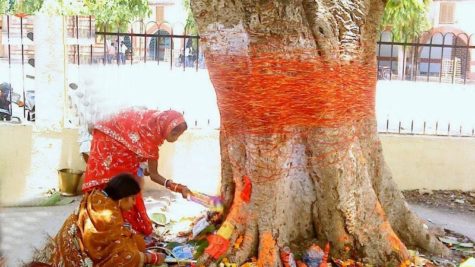 Of course there are many myths associated with this ritual. The most popular being one where a princess called Savitry who saves the life of her husband by using reverse psychology on the God of Death himself. Using her intelligence, and playing on words, she manages to charm Yama and wins back the life of her beloved husband Satyavan.

Myths aside, the central message of the ritual is, love is tantalisingly weak, yet it can be made strong if you are willing to work on it. 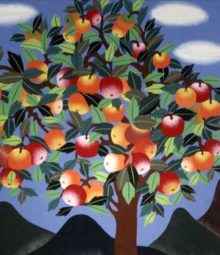 Persons born under the sign of the Apple Tree tend to be slight of build, with lots of charm, appeal, and attraction, pleasant aura, flirtatious, adventurous, sensitive, always in love, wants to love and be loved, faithful and tender partner, very generous, scientific talents, lives for today, a carefree philosopher with imagination. 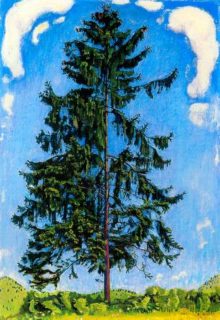 Persons born under the sign of the Fir Tree tend to have the following qualities: extraordinary taste, dignity, sophisticated, loves anything beautiful, moody, stubborn, tends to egoism but cares for those close to them, rather modest, very ambitious, talented, industrious, uncontested lover, many friends, many foes, very reliable. 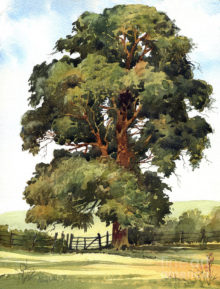 Persons born under the sign of the Elm tend to have a pleasant shape, wear tasteful clothes, and make modest demands. They tend not to forgive mistakes, are cheerful, like to lead but not to obey. Is an honest and faithful partner, likes making decisions for others, noble-minded, generous, good sense of humor, practical. 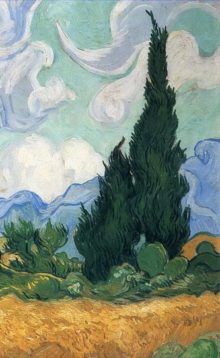 Persons born under the sign of the Cypress tend to be strong, muscular, and adaptable. They  take what life has to give, are content, and optimistic. Often they crave money and acknowledgment. A person born under this sign tends to hate loneliness, and is a passionate lover which cannot be satisfied. They can also be faithful, quick-tempered, unruly, pedantic, and careless. 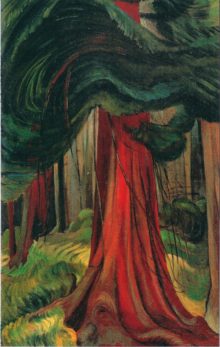 The person born under the sign of the Cedar may possess a rare beauty. Other qualities include the following:  knows how to adapt, likes luxury, of good health, not in the least shy,  tends to look down on others, self-confident, determined, impatient, likes to impress others, many talents, industrious, healthy optimism, waiting for the one true love, able to make quick decisions. 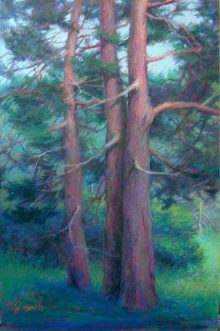 According to some astrological traditions, it is said that if you were born under the sign of the Pine tree you might tend toward the following qualities:  loves agreeable company, very robust, knows how to make life comfortable, very active, natural, good companion, but seldom friendly, falls easily in  love but its passion burns out quickly, gives up easily, everything disappointments until it finds its ideal. trustworthy, practical.

Promote Your Page Too
Breadcrumbs
A trail of breadcrumbs in case you lose your way... Sigils Symbols and Signs > Newest Symbols > Tree Signs and Symbols