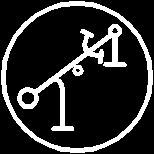 The Forty-First Name is LUGALANNA.

Increases your own power, especially your magick ability. Assists in finding your own True Will, a most necessary step in becoming proficient in all magick. Also has the uncanny ability to help you remember your past lives and other incarnation.

Promote Your Page Too
Breadcrumbs
A trail of breadcrumbs in case you lose your way... Sigils Symbols and Signs > Newest Symbols > Necronomicon Symbols > Lugalanna