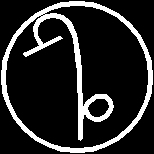 The First Name is MARDUK.

The Lord of Lords, Master of Magicians. His name should not be called except when no other will do, and it is the most terrible responsibility to do so. The word of his calling is DUGGA.

This, the first name of MARDUK, should only be used when life is threatened. It is not wise to use it on any other occasion, of flippantly in way. To do so would be to render the other seals and names worthless, for MARDUK would abandon you to your fate.

“The Fifty Names with their Signs and Powers may be summoned after the Priest has ascended to that step on the Ladder of Lights and gained entrance to that Sacred City. The Signs should be engraved on parchment or sealed in clay and placed upon the altar at the Calling. And in the perfumes should be of cedar, and strong, sweet-smelling resins. And the Calling be to the North.”

Promote Your Page Too
Breadcrumbs
A trail of breadcrumbs in case you lose your way... Sigils Symbols and Signs > Newest Symbols > Necronomicon Symbols > Marduk