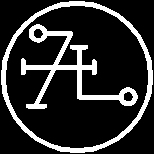 The Fifteenth Name is ZIKU

This power bestows Riches of all kinds and can tell where treasure is hidden. Knower of the Secrets of the Earth. His Word is GIGGIMAGANPA.

Although quite often scholars attribute metaphorical meanings to the powers said to be found in spiritual spell books, ZIKU has been known to work both ways, both literal and metaphorical. A reader who has used ZIKU before writes to tell us that after invoking him she discovered a ten dollar bill in the street. That was only the beginning, however. She discovered that her attic contained a valuable stamp collection that she sold to an interested buyer the following week. A “hidden treasure”?

Promote Your Page Too
Breadcrumbs
A trail of breadcrumbs in case you lose your way... Sigils Symbols and Signs > Newest Symbols > Necronomicon Symbols > Ziku