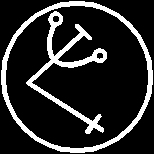 The Thirty-Eighth Name is LUGALDURMAH.

The Lord of Lofty Places, Watcher of the Skies and all that travels therein. Naught traverses the starry element, but that this Power is aware. His Word is ARATAAGARBAL.

Increases psychic awareness, even in those who claim they have no ESP. Trains the mind in picking up subconscious signals from others, forewarns of precognition. Good for astrologers and diviners, or to invoke before going to see a reader or astrologer to insure a true reading.

Promote Your Page Too
Breadcrumbs
A trail of breadcrumbs in case you lose your way... Sigils Symbols and Signs > Newest Symbols > Necronomicon Symbols > Lugaldurmah