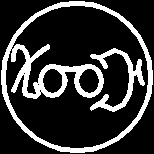 The Fourth Name is BARASHAKUSHU.

Worker of Miracles. The kindest of the Fifty, and the most beneficent. The Word used at his Calling is BAALDURU.

Can be used in hopeless cases, when it seems that the whole world is against you or a loved one. When despair reaches its lowest depth, and a coldness constricts your soul, call forcefully upon BARASHAKUSHU will all your might and hope and your prayer will be answered in ways you cannot imagine.

Promote Your Page Too
Breadcrumbs
A trail of breadcrumbs in case you lose your way... Sigils Symbols and Signs > Newest Symbols > Necronomicon Symbols > Barashakushu