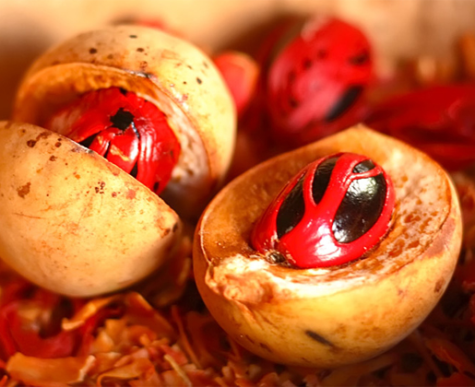 Mace is a spice made from the waxy red covering which covers nutmeg seeds. It is completely different from the protective pepper spray with the same name.

Mace is produced by, Myristica franrans, a member of the mayriticaceae family. This plant, native to Indonesia, grows into a tropical evergreen tree of up to thirty feet tall.

Mace is actually the aril of the nutmeg seed shell. It is removed from the shell. The broken part of it is generally known as blades. Nutmeg and mace are treated separately. But the history of both of them is related to each other. The color of mace can be different from one to another place. The mace from West Indies is generally yellowish brown. On the other side mace from East Indian nutmegs are actually orange when dried. Mace is sweet and fragrant but quite stronger than nutmeg. The flavor of mace is aromatic, sharp and warm and is sweeter than nutmeg.

Mace emits a powerful, spicy odor and is well known from its use in cooking. It smells a lot like nutmeg, which makes complete sense, since mace is actually the covering of the nutmeg nut. Because it has this aspect of being like a peel or rind, it is usually considered ruled by Mercury according to sources like Agrippa, even though its scent is warmish, reminding one more of Jupiter or Sun. But Mercury works well for just about any magical purpose, since Mercury rules magic itself.

It is designated as the primary incense in Grimoirium Verum, in particular for censing the Circle. Mace has a more complex scent than nutmeg, perhaps not as flowery: a blend of spice, bitterness, clove, and pine. Mace is one of the winter spices in Wassail bowl, along with cardamom, clove, nutmeg, ginger, cinnamon, and coriander, and is often, along with them, used in prosperity charms. The nice thing about blade mace is that you can be sure there is nothing in it but mace.

To enhance psychic awareness, sit comfortably and inhale the aroma, visualizing it penetrating your conscious mind, relaxing its hold and traveling to your deep consciousness. Psychic awareness will blossom.

Sprinkle some outside doors and windows for protection. Mace also stimulates brain activity and creativity. Smell the spice for inspiration, or mix with success formulas and burn as incense. You can also dust your hands with the powder.

Mace at one time found use in a money-drawing douche among prostitutes, who mixed the powder with distilled vinegar and water. It was said that a man whose member came in contact with a woman who had thus “dressed her pussy” would be under her control, and would seek her out and pay her well for repeated trysts.

One Response to Mace Magick and Lore