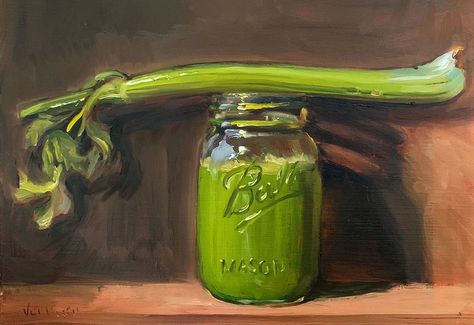 It should be mentioned that this is the garden celery under the rulership of Mercury, rather than Wild Celery, which is under the dominion of Venus.

This herbal seed, found in most kitchens, is used as a Visionary Herb. There are forms of divination which recommend drinking a tea of the seed as it opens the mind and allows for better concentration.

Use celery seed to increase male virility. Men can either eat it or add it to poppets in sympathetic magick spells.

To awaken your psychic awareness, crush about a teaspoon of the dried seeds and tie up in a piece of thin, cotton cloth. Inhale the odor and visualize your conscious mind relaxing (perhaps as a fist relaxes), allowing true communication with your psychic mind to occur.

Celery is sometimes used as a cure for impotence. Several sticks of celery need to be boiled in a saucepan of water until the celery turns into a pulp. The person with the problem needs to eat this while it is still hot, and can then look forward to a night of successful lovemaking. 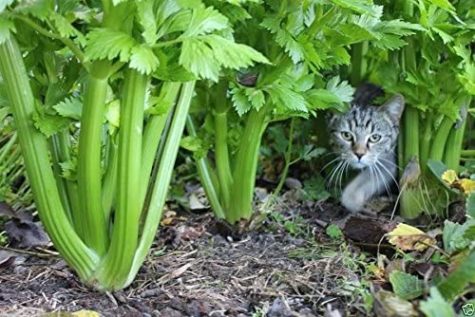 Folk and Other Names 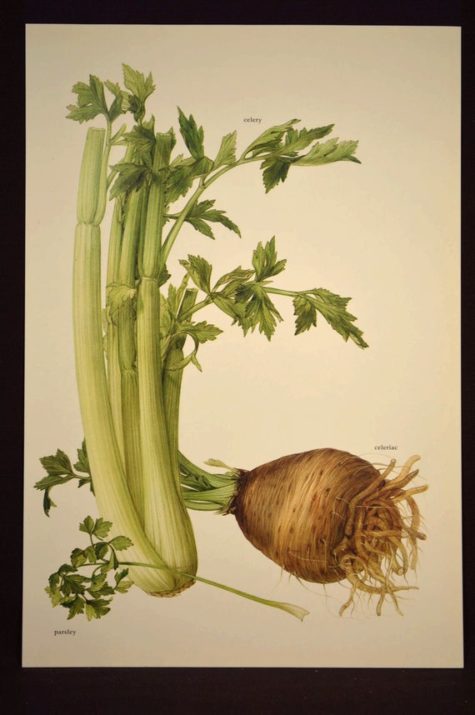 Celery had its beginning several thousand years ago in shallow swampy areas of mainland China. The plant was prized for its seed, used medicinally and as a flavoring, and mentioned in the writings of Confucius. This would place it at about 500 B.C. on the world timeline.

A similar plant grew in the Mediterranean. It had a strong aroma (its Latin name means “strongly smelling”) and dark green leaves. The Greeks fashioned wreaths from it to adorn the victors in athletic and musical competitions. The Romans considered deemed it an aphrodisiac. And garlands of the leaves were found in Tutankhamun’s tomb.

The modern name “celery” comes from Greek selinon. It was ascribed to Silenus (or Seilenus), the son of a nymph and lustful Pan (or, according to other depictions, Hermes, the messenger of the gods who transgresses all borders).

Silenus, constantly drunk and lecherous, is depicted as pot-bellied with a beefy bald head and often with the ears, tail, and legs of a horse. He was the leader of the lustful horde of satyrs as well as the teacher and companion of Dionysus, the god of inebriation. Half human, half horse, Dionysus symbolizes, among other things, the powerful animal drive. The association of this satyr with celery, emphasizes the plant’s use as an effective agent of sexual potency.

In the Odyssey, the enchantress Calypso took in shipwrecked Odysseus and held him enraptured for seven years; she also turned his men into “swine.” Comparative religion studies indicate that Calypso was a goddess of death, as the name suggests (kalypto = to enshroud) and that pigs were sacred to the earth and death goddess of antiquity.

That Odysseus ultimately freed himself from her magic is seen as a victory over death, as in all mythologies the hero, having come dangerously close to death, succeeds in wresting new life from the dark forces. This interpretation lends meaning to the ancient Greek practice of crowning winners of riding and gymnastic games with celery leaves. 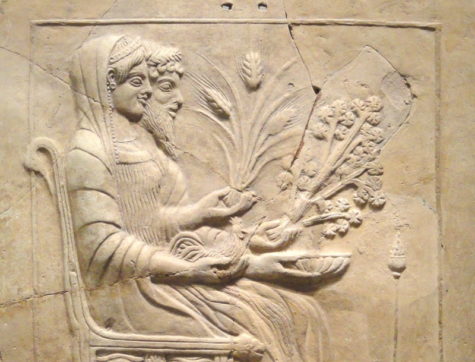 Celery has a long association with death. Ancient Egyptian mummies were often decorated with celery and blue lotus blossoms. Ancient Greeks planted it on graves and used it to season funeral feasts. The Roman Virgil (70–19 BC) described much the same:

“It is not right to put celery in common dishes because it belongs to funeral feasts.”

The Romans also dedicated celery, as part of the death rites, to Orcus, the god of the underworld, as told by Plutarch (45–120 AD): “We decorate our gravesites with celery.” Given such practices, it was considered a bad omen to see a cart loaded with celery first thing in the morning. And for someone who was marked by death, the Romans said: “There is only celery left for him.” This is an interesting angle given the fact that, like the ancient Greeks, Romans also crowned their victors with celery leaves. And celery, next to dill and coriander, was a favorite condiment in the Roman cuisine.

Celery’s association with death lasted well into our own times. Wend (Slavic) tradition in northern German Spreewald claims that merek (celery) protects against being haunted by the dead.

And the Italian fairy tale “Marianne and the Celery King” tells of a maiden who, attempting to pull a celery bulb from the soil is instead pulled into the ground; “the ground closed over them like water over a stone.” Below the earth, she finds a golden castle and an old, long-bearded hunchbacked man who resembles a celery root: the Celery King, who marries and impregnates her. But he is also an enchanted prince. After the heroine surmounts numerous tasks and challenges she is able to redeem the prince and bring him back to the world above the ground.

Nowadays such stories are given anecdotic value at most. However, traditional customs, folklore, and imaginative perception teach us much about the essence of the plant. In such imaginative terms, let us consider the celery.

Celery is a biennial; its “incarnation” lasts two years. In the first year, it concentrates on absorbing salty, moist earth forces, during which time it swells and becomes lush. During this year there is a clear pull to the dark, cool earth realm, to downward-moving elements and, figuratively speaking, to the grave, bitter death, and the mourning that causes salty tears to flow—but also to the fertile, ever-bearing primal source.

In the second year the plant ascends to the light, shooting up into bloom, opening and branching out as it bathes in cosmic light. The plant now sets a counterpoint to the earthy, moist, salty forces with its “light and fiery” essential oils.

Thus it becomes a plant for victors and heroes, one that overcomes the dark forces, that wards off the evil eye (in Spain), that thwarts the scheming of wicked witches. Even in modern Greece celery blossoms—together with garlic and onion—are hung for good luck. They protect the area where silk worms are being raised; small children are given amulets of celery to keep them from harm.

In Prussia and Pomerania the leaves were stuffed into cracks in floors and walls in pigsties to protect the animals from evil magic—and young married couples were given a piece of root to put in a pocket or a shoe for good luck.

Nicholas Culpeper (1616–1654) recognized the ambivalent nature of celery. He ascribed the plant to the hermaphroditic god, Mercury—the Roman Hermes, who can as easily fly up to the light-filled world of the gods as he can descend to the underworld. Indeed, Mercury-Hermes is the ruler of rising and sinking energy flow. He loosens, cleanses, opens, splits, and removes blockages by bringing everything back into flow.

Culpeper, just as other doctors before and after him, used this mercurial plant to heal “water diseases,” “obstructions” while urinating, and stone ailments, and to activate the liver and the spleen.

Celery works in the microcosm of the human body true to character. It affects the root chakra, the Muladhara, down into the sexual organs and the “salty, watery” urinary organs. Celery can reduce the milk flow for nursing mothers—a compress can actually temporarily reduce the breast size—but can also stimulate the uterus and bring on menstruation. 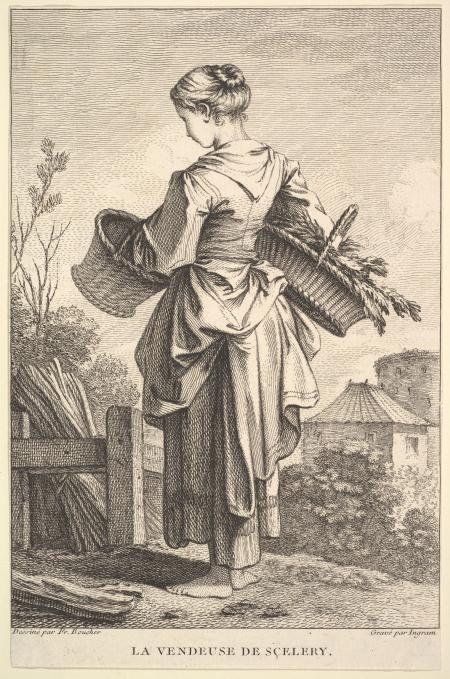 As “maiden’s smallage” it belonged to the herbs that women took in case of a “belated period,” when they feared they’d been impregnated. German scholar and bishop Albertus Magnus (1200–1280) described the downward pull of the plant: “Celery causes sensual desire to descend from the breasts of wet nurses to the genital area and bring about menstruation.”

It is often the case that emmenagogues work for men as aphrodisiacs, as indicated in such names as “stand-up herb” (Lausitz, Germany), “stand-up wort,” “stud wort” and “buck’s wort.” A fifteenth-century medical book tells us: “So that your wife stays faithful forever mix celery juice and honey and rub your genitals with the mixture. This way she will be satisfied and will want no one else but you.” Consider too this German saying:

Fry me eggs, sweetheart,
with celery and lettuce,
on Sunday we will go courting,
my mother told me this. 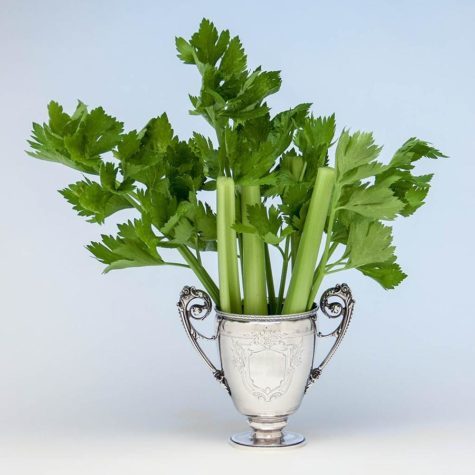 In 14th-century Italy where the rich and curious began to selectively cultivate celery. The stalks became fatter and pleasingly crunchy; they paled from intense dark green to a subtle, delicate hue; and the taste evolved from bitter to pleasingly grassy and citrus-like.

When celery lost its flavorful wild side, it also became less rampant. These new strains were fussy and difficult to obtain, which of course made them irresistible to the elite. By the mid-19th century, celery was so prized by the upper class that serving vases were made specifically for the purpose of displaying it as the centerpiece at fine dinners.

While European epicures were feasting on blanched celery au velouté, American farmers were reveling in how easy it was to cultivate the luxury vegetable in the Great Lakes region. They were resourceful, ambitious, and even competitive when it came to growing celery.

As the celery craze was reaching its zenith in the 1870s, Dutch farmers who knew how to handle wetlands began growing the vegetable in the black, marshy soils of Kalamazoo, Michigan, which became known by the catchy name the Celery City. The streets were littered with hucksters peddling celery from street corners and train stations. As American cultivation improved, celery became an everyman’s item. By then, the British upper classes had moved on to French luxuries like truffles and oysters.

One Response to Celery Magick and Lore