This epic is one of the most important sources for understanding the Babylonian worldview, centered on the supremacy of Marduk and the creation of humankind for the service of the gods. Its primary original purpose, however, is not an exposition of theology but the elevation of Marduk, the chief god of Babylon, above other Mesopotamian gods.

The Enûma Eliš exists in various copies from Babylon and Assyria. The version from Ashurbanipal’s library dates to the 7th century BCE. The composition of the text probably dates to the bronze age, to the time of Hammurabi or perhaps the early Kassite era (roughly 18th to 16th centuries BCE), although some scholars favor a later date of c. 1100 BCE. 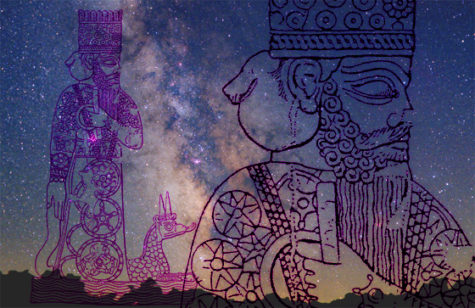 What follows is a summary of the information on the seven tablets:

Apsu is the god of fresh water and thus male fertility. Tiamat, wife of Apsu, is the goddess of the sea and thus chaos and threat. Tiamat gives birth to Anshar and Kishar, gods who represented the boundary between the earth and sky (the horizon). To Anshar and Kishar is born Anu, god of sky, who in turn bears Ea.

These “sons of the gods” make so much commotion and are so ill-behaved that Apsu decides to destroy them. When Ea learns of the plan, he kills Apsu and with his wife Damkina establishes their dwelling above his body. Damkina then gives birth to Marduk, the god of spring symbolized both by the light of the sun and the lightning in storm and rain. He was also the patron god of the city of Babylon.

Meanwhile Tiamat is enraged at the murder of her husband Apsu, and vows revenge. She creates eleven monsters to help her carry out her vengeance. Tiamat takes a new husband, Kingu, in place of the slain Apsu and puts him in charge of her newly assembled army.

Tiamat represents the forces of disorder and chaos in the world. In the cycle of seasons, Tiamat is winter and barrenness. In the second tablet, to avenge the murder of her husband Tiamat prepares to unleash on the other gods the destructive forces that she has assembled.

Ea learns of her plan and attempts to confront Tiamat. While the tablet is damaged, it is apparent that Ea fails to stop Tiamat. Then Anu attempts to challenge her but fails as well. The gods become afraid that no one will be able to stop Taimat’s vengeful rampage.

Anshar’s minister Gaga is dispatched to the other gods to report the activities of Tiamat and to tell them of Marduk’s willingness to face her. Much of this tablet is poetic repetition of previous conversations.

The council of the gods tests Marduk’s powers by having him make a garment disappear and then reappear. After passing the test, the council enthrones Marduk as high king and commissions him to fight Tiamat.

With the authority and power of the council, Marduk assembles his weapons, the four winds as well as the seven winds of destruction. He rides in his chariot of clouds with the weapons of the storm to confront Tiamat. After entangling her in a net, Marduk unleashes the Evil Wind to inflate Tiamat. When she is incapacitated by the wind, Marduk kills her with an arrow through her heart and takes captive the other gods and monsters who were her allies.

He also captured her husband Kingu. After smashing Tiamat’s head with a club, Marduk divided her corpse, using half to create the earth and the other half to create the sky complete with bars to keep the chaotic waters from escaping. The tablet ends with Marduk establishing dwelling places for his allies.

Marduk builds dwelling places for the other gods. As they take their place, they establish the days and months and seasons of the year. Since this is a myth about the natural world, the “stations” that Marduk establishes for the gods correspond to the celestial luminaries that figured in Babylonian astrology. The phases (horns) of the Moon determine the cycles of the months. From the spittle of Tiamat Marduk creates rain for the earth.

The city of Babylon is established as the audience room of King Marduk.

Marduk decides to create human beings, but needs blood and bone from which to fashion them. Ea advises that only one of the gods should die to provide the materials for creation, the one who was guilty of plotting evil against the gods. Marduk inquires of the assembly of the gods about who incited Tiamat’s rebellion, and was told that it was her husband Kingu.

Ea kills Kingu and uses his blood to fashion mankind so they can perform menial tasks for the gods. To honor Marduk, the gods construct a house for him in Babylon. After its completion, Marduk gives a great feast for the gods in his new house who all praise Marduk for his greatness in subduing Tiamat.

The first group of the fifty throne names of Marduk are recited.

Continuation of praise of Marduk as chief of Babylon and head of the Babylonian pantheon because of his role in creation. The rest of Marduk’s fifty throne names declaring his dominion are recited. Final blessings on Marduk and instructions to the people to remember and recite Marduk’s deeds.