How People Learned to Write 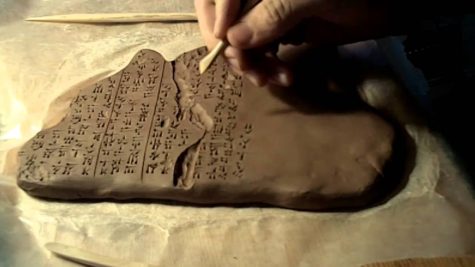 The final decisions were made by Marduk, king of the gods, but all the gods and goddesses took part in the discussion and put forward their arguments and opinions.

When Marduk reached his decisions, he whispered them to his son Nabu who carefully wrote the fate of each person down on his special clay tablet. When the time was right, Nabu checked the writing on his tablets to make sure of Marduk’s orders. He then summoned the appropriate god, goddess, or demon, who was sent to Earth to carry out Marduk’s instructions.

Sin, the moon god, always stood close to Marduk during the discussions and sometimes he overheard Marduk’s decisions or caught a glimpse of what Nabu was writing. Then Sin would send his messenger Zaqar to Earth to warn people of the fate in store for them. Zaqar moved through the night and whispered to people in their dreams. However, people did not always hear him correctly and sometimes misunderstood the voices in their dreams.

One year, Nabu came down from the palace of Marduk with his wife, Tashmetum. They lived on Earth for some time in the city of Borsippa. There Nabu and Tashmetum taught people how to read and write so that they could keep a record of the lives and destinies of men and women, just as Nabu wrote his own records of Marduk’s instructions.

Nabu and Tashmetum eventually returned to the heavens, but people have continued teaching each other how to read and write ever since.

Promote Your Page Too
Bread Crumbs
A trail of bread crumbs, just in case you get lost in the widdershins ... Widdershins > Blog Page > Myths and Legends > How People Learned to Write