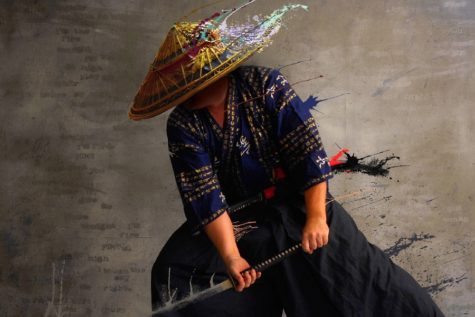 I have no parents ~
I make the heavens and earth my parents.

I have no home ~
I make awareness my home.

I have no life or death ~
I make the tides of breathing my life and death.

I have no means ~
I make understanding my means.

I have no body ~
I make endurance my body.

I have no eyes ~
I make the flash of lightning my eyes.

I have no ears ~
I make sensibility my ears.

I have no limbs ~
I make promptness my limbs.

I have no strategy ~
I make “unshadowed by thought” my strategy.

I have no designs ~
I make “seizing opportunity by the forelock” my design.

I have no miracles ~
I make right action my miracle.

I have no principles ~
I make adaptability to all circumstances my principles.

I have no tactics ~
I make emptiness and fullness my tactics.

I have no friends ~
I make my mind my friend.

I have no enemy ~
I make carelessness my enemy.

I have no armor ~
I make benevolence and righteousness my armor.

I have no castle ~
I make immovable-mind my castle.

I have no sword ~
I make absence of self my sword.

From the book Werwolves, by Elliott O’Donnell, first published in 1912, we have this account of the case of the family of Kloska and the Lycanthropous flower. 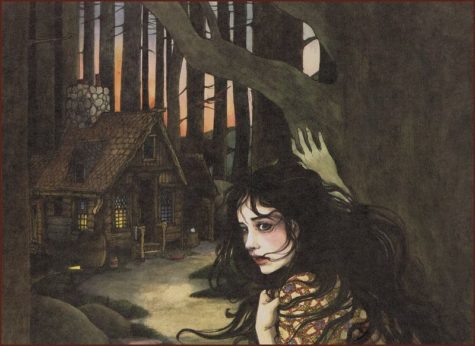 In the mountainous regions of Austria-Hungary and the Balkan Peninsula are certain flowers credited with the property of converting into werewolves whoever plucks and wears them. Needless to say, these flowers are very rare, but I have heard of their having been found, comparatively recently, both in the Transylvanian Alps and the Balkans.

A story a propos of one of these discoveries was told me last summer.

Ivan and Olga were the children of Otto and Vera Kloska – the former a storekeeper of Kerovitch, a village on the Roumanian side of the Transylvanian Alps. One morning they were out with their mother, watching her wash clothes in a brook at the back of their house, when, getting tired of their occupation, they wandered into a thicket.

“Let’s make a chaplet of flowers,” Olga said, plucking a daisy. “You gather the flowers and I’ll weave them together.”

“It’s not much of a game,” Ivan grumbled, “but I can’t think of anything more exciting just now, so I’ll play it. But let’s both make wreaths and see which makes the best.”

To this Olga agreed, and they were soon busily hunting amidst the grass and undergrowth, and scrambling into all sorts of possible and impossible places.

Presently Ivan heard a scream, followed by a heavy thud, and running in the direction of the noise, narrowly avoided falling into a pit, the sides of which were partly overgrown with weeds and brambles.

“It’s all right,” Olga shouted; “I’m not hurt. I landed on soft ground. It’s not very deep, and there’s such a queer flower here – I don’t know what it is; I’ve never seen one like it before.”

Ivan’s curiosity thus aroused, he carefully examined the sides of the pit, and, selecting the shallowest spot, lowered himself slowly over and then dropped. It was nothing of a distance, seven or eight feet at the most, and he alighted without mishap on a clump of rank, luxuriant grass. “See! here it is,” his sister cried, pointing to a large, very vivid white flower, shaped something like a sunflower, but soft and pulpy, and full of a sweet, nauseating odour. “It’s too big to put in a wreath, so I’ll wear it in my buttonhole.”

“Better not,” Ivan said, snatching it from her; “I don’t like it. It’s a nasty-looking thing. I believe it’s a sort of fungus.”

Olga then began to cry, and as Ivan was desirous of keeping the peace, he gave her back the flower. She was a prepossessing child, with black hair and large dark eyes, pretty teeth and plump, sunburnt cheeks. Nor was she altogether unaware of her attractions, for even at so early an age she had a goodly share of the inordinate vanity common to her sex, and liked nothing better than appearing out-of-doors in a new frock plentifully besprinkled with rosettes and ribbons.

The flower, she told herself, would look well on her scarlet bodice, and would be a good set-off to her black hair and olive complexion. All this was, of course, beyond the comprehension of Ivan, who regarded his sister’s weakness with the most supreme contempt, and for his own part was never so happy as when skylarking with other boys and getting into every conceivable kind of mischief. Yet for all that he was in the main sensible, almost beyond his years, and extremely fond, and – though he would not admit it – proud of Olga.

She fixed the flower in her dress, and imitating to the best of her knowledge the carriage of royalty, strutted up and down, saying “Am I not grand? Don’t I look nice? Ivan – salute me!”

And Ivan was preparing to salute her in the proper military style, taught him by a great friend of his in the village, a soldier in the carabineers for whom he had an intense admiration, when his jaw suddenly fell and his eyes bulged.

“Whatever is the matter with you?” Olga asked.

“There’s nothing the matter with me,” Ivan cried, shrinking away from her; “but there is with you. Don’t! don’t make such faces – they frighten me,” and turning round, he ran to the place where he had made his descent and tried to climb up.

Some minutes later the mother of the children, hearing piercing shrieks for help, flew to the pit, and, missing her footing, slipped over the brink, and falling some ten or more feet, broke one of her legs and otherwise bruised herself.

For some seconds she was unconscious, and the first sight that met her eyes on coming to was Ivan kneeling on the ground, feebly endeavoring to hold at bay a gaunt grey wolf that had already bitten him about the legs and thigh, and was now trying hard to fix its wicked white fangs into his throat.

“Olga!” the mother screamed, making frantic efforts to come to his assistance. “Olga! what do you mean?”

“It’s all owing to a flower – a white flower,” Ivan panted; “Olga would pluck it, and no sooner had she fixed it on her dress than she turned into a wolf! Quick, quick! I can’t hold it off any longer.”

Thus adjured the wretched woman made a terrific effort to rise, and failing in this, clenched her teeth, and, lying down, rolled over and over till she arrived at the spot where the struggle was taking place. By this time, however, the wolf had broken through Ivan’s guard, and he was now on his back with his right arm in the grip of his ferocious enemy.

The mother had not a knife, but she had a long steel skewer she used for sticking into a tree as a means of fastening one end of her washing line. She wore it hanging to her girdle, and it was quite by a miracle it had not run into her when she fell.

“Take care, mother,” Ivan cried, as she raised it ready to strike; “remember, it is Olga.”

This indeed was an ugly fact that the woman in her anxiety to save the boy had forgotten. What should she do? To merely wound the animal would be to make it ten times more savage, in which case it would almost inevitably destroy them both. To kill it would mean killing Olga. Which did she love the most, the boy or the girl?

Never was a mother placed in such a dilemma. And she had no time to deliberate, not even a second. God help her, she chose. And like ninety-nine out of a hundred mothers would have done, she chose the boy; he – he at all costs must be saved. She struck, struck with all the pent-up energy of despair, and in her blind, mad zeal she struck again.

The first blow, penetrating the werewolf’s eye, sank deep into its brain, but the second blow missed – missed, and falling aslant, alighted on the form beneath.

An hour later a villager on his way home, hearing extraordinary sounds of mirth, went to the side of the pit and peeped over.

“Vera Kloska!” he screamed; “Heaven have mercy on us, what have you there?”

“He! he! he!” came the answer. “He! he! he! My children! Don’t they look funny? Olga has such a pretty white flower in her buttonhole, and Ivan a red stain on his forehead. They are deaf – they won’t reply when I speak to them. See if you can make them hear.”

But the villager shook his head. “They’ll never hear again in this world, mad soul,” he muttered. “You’ve murdered them.” 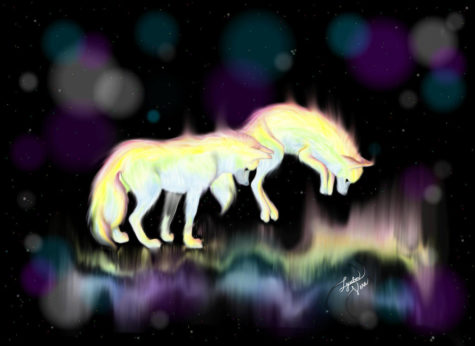 “Once upon a time there was a young white fox, whose name was Fukuyemon. When he had reached the fitting age, he shaved off his forelock and began to think of taking to himself a beautiful bride. The old fox, his father, resolved to give up his inheritance to his son, and retired into private life; so the young fox, in gratitude for this, labored hard and earnestly to increase his patrimony.

Now it happened that in a famous old family of foxes there was a beautiful young lady-fox, with such lovely fur that the fame of her jewel-like charms was spread far and wide. The young white fox, who had heard of this, was bent on making her his wife, and a meeting was arranged between them. There was not a fault to be found on either side; so the preliminaries were settled, and the wedding presents sent from the bridegroom to the bride’s house, with congratulatory speeches from the messenger, which were duly acknowledged by the person deputed to receive the gifts; the bearers, of course, received the customary fee in copper cash.

When the ceremonies had been concluded, an auspicious day was chosen for the bride to go to her husband’s house, and she was carried off in solemn procession during a shower of rain, the sun shining all the while. After the ceremonies of drinking wine had been gone through, the bride changed her dress, and the wedding was concluded, without let or hindrance, amid singing and dancing and merry-making.

The bride and bridegroom lived lovingly together, and a litter of little foxes were born to them, to the great joy of the old grandsire, who treated the little cubs as tenderly as if they had been butterflies or flowers. “They’re the very image of their old grandfather,” said he, as proud as possible. “As for medicine, bless them, they’re so healthy that they’ll never need a copper coin’s worth!”

As soon as they were old enough, they were carried off to the temple of Inari Sama, the patron saint of foxes, and the old grand-parents prayed that they might be delivered from dogs and all the other ills to which fox flesh is heir.

In this way the white fox by degrees waxed old and prosperous, and his children, year by year, became more and more numerous around him; so that, happy in his family and his business, every recurring spring brought him fresh cause for joy. “

Promote Your Page Too
Bread Crumbs
A trail of bread crumbs, just in case you get lost in the widdershins ... Widdershins > Blog Page > 2019 > February