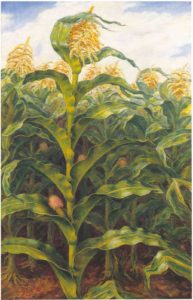 Often Corn husks and Wheat straw are used to create what are called ‘Corn Dollies’. These are usually in the shape of a doll or are woven into various other shapes and are carried as charms or put on an altar. Corn dollies can be hung from the rafters of a house to offer protection for the house and all those who dwell within. Corn can also be used in many forms of fertility magic. Corn silk is a very powerful ingredient when added to love spells; it is designed to attract the person you desire.

Corn can be worn as jewelry or in amulets to make the wearer closer to the spirit of the earth. Corn can be used to divine the future. An old folk spell said that if a damsel found a blood-red ear of maize, she would have a suitor before the year was out. Financial or love wishes that are shouted out as popcorn is popping will come true.

Corn is a sacred Druidic herb of Mean Fomhair (also called Mabon) and of Samhain. Corn is associated with the element of earth and the planets Venus and Saturn. Because Corn was such an important part of the food supply of many early cultures, almost every ancient religion had a Corn God or Goddess.

Some of these Corn deities are: Annonaria, Roman Goddess protector of the Corn supplies; Cerklicing, the Latvian god of fields and Corn; Kurke, the Prussian God of Corn; Nepit, an Egyptian Corn Goddess and Neper an Egyptian Corn-God; Nodutus, the Roman god who was held responsible for making the knots in the stalks of Corn; Nzeanzo, the Sudan god of rain, medicine, Corn, fertility and metal-working; Robigo, a Roman Goddess of Corn; Iyatiku, the Pueblo Corn Goddess; and Gabjauja, the Lithuanian Goddess of Corn (with the advent of Christianity She was, as were so many other Pagan deities, reduced to a demon).

Important note:
Remember that when harvesting Corn for magickal uses it is important to say thank you to the grain spirits:

“Mother of Corn
I harvest thee.
In spring thou wilt
A maiden be.”