From the book Werwolves, by Elliott O’Donnell, first published in 1912, we have this account of werewolves and witches. 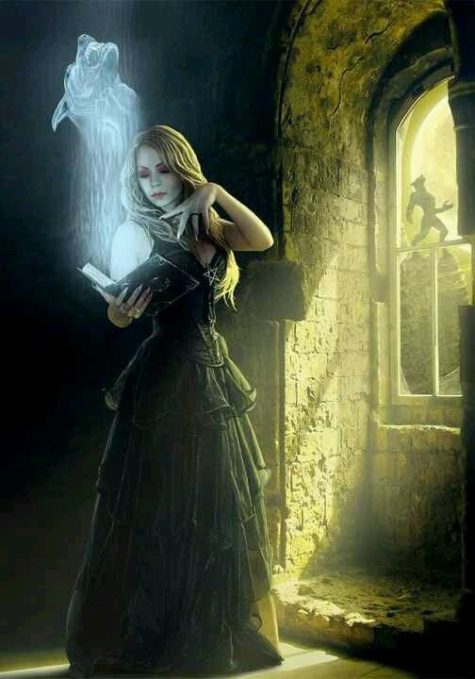 To inflict the evil property of werwolfery upon those against whom they – or some other – bore a grudge was, in the Middle Ages, a method of revenge frequently resorted to by witches; and countless knights and ladies were thus victimized. Nor were such practices confined to ancient times; for as late as the eighteenth century a case of this kind of witchcraft is reported to have happened in the vicinity of Blois.

In a village some three miles from Blois, on the outskirts of a forest, dwelt an innkeeper called Antonio Cellini, who, as the name suggests, was of Italian origin. Antonio had only one child, Beatrice, a very pretty girl, who at the time of this story was about nineteen years of age.

As might be expected, Beatrice had many admirers; but none were so passionately attached to her as Herbert Poyer, a handsome youth, and one Henri Sangfeu, an extremely plain youth. Beatrice – and one can scarcely blame her for it – preferred Herbert, and with the whole-hearted approval of her father consented to marry him.

Sangfeu was not unnaturally upset; but, in all probability, he would have eventually resigned himself to the inevitable, had it not been for a village wag, who in an idle moment wrote a poem and entitled it

“Sansfeu the Ugly; or, Love Unrequited.”

The poem, which was illustrated with several clever caricatures of the unfortunate Henri and contained much caustic wit, took like wildfire in the village; and Henri, in consequence, had a very bad time. Eventually it was shown to Beatrice, and it was then that the climax was reached.

Although Henri was present at the moment, unable to restrain herself, she went into peals of laughter at the drawings, saying over and over again: “How like him – how very like! His nose to a nicety! It is certainly correct to style him Sansfeu – for no one could call him Sansnez!”

Her mirth was infectious; every one joined in; only Henri slunk away, crimson with rage and mortification. He hated Beatrice now as much as he had loved her before; and he thirsted only for revenge.

Some distance from the village and in the heart of the forest lived an old woman known as Mere Maxim, who was said to be a witch, and, therefore, shunned by every one. All sorts of unsavoury stories were told of her, and she was held responsible for several outbreaks of epidemics – hitherto unknown in the neighbourhood – many accidents, and more than one death.

The spot where she lived was carefully avoided. Those who ventured far in the forest after nightfall either never came back at all or returned half imbecile with terror, and afterwards poured out to their affrighted friends incoherent stories of the strange lights and terrible forms they had encountered, moving about amid the trees.

Up to the present Henri had been just as scared by these tales as the rest of the villagers; but so intense was his longing for revenge that he at length resolved to visit Mere Maxim and solicit her assistance. Choosing a morning when the sun was shining brightly, he screwed up his courage, and after many bad scares finally succeeded in reaching her dwelling – or, I might say, her shanty, for by a more appropriate term than the latter such a queer-looking untidy habitation could not be described.

To his astonishment Mere Maxim was by no means so unprepossessing as he had imagined. On the contrary, she was more than passably good-looking, with black hair, rosy cheeks, and exceedingly white teeth. What he did not altogether like were her eyes – which, though large and well shaped, had in them an occasional glitter – and her hands, which, though remarkably white and slender, had very long and curved nails, that to his mind suggested all sorts of unpleasant ideas.

She was becomingly dressed in brown – brown woolly garments, with a brown fur cap, brown stockings, and brown shoes ornamented with very bright silver buckles. Altogether she was decidedly chic; and if a little incongruous in her surroundings, such incongruity only made her the more alluring; and as far as Henri was concerned rather added to her charms.

At all events, he needed no second invitation to seat himself by her side in the chimney-corner, and his heart thumped as it had never thumped before when she encouraged him to put his arm round her waist and kiss her. It was the first time a woman had ever suffered him to kiss her without violent protestations and avowals of disgust.

“You are not very handsome, it is true,” Mere Maxim remarked, “but you are fat – and I like fat young men,” and she pinched his cheeks playfully and patted his hands. “Are you sure no one knows you have come to see me?” she asked.

“Certain!” Henri replied; “I haven’t confided in a soul; I haven’t even so much as dropped a hint that I intended seeing you.”

“That is good!” Mere Maxim said. “Tell no one, otherwise I shall not be able to help you. Also, on no account let the girl Beatrice think you bear her animosity. Be civil and friendly to her whenever you meet; then give her, as a wedding present, this belt and box of bonbons.”

So saying, she handed him a beautiful belt composed of the skin of some wild animal and fastened with a gold buckle, and a box of delicious pink and white sugarplums. “Do not give her these things till the marriage eve,” she added, “and directly you have given them come and see me – always observing the greatest secrecy.”

She then kissed him, and he went away brimming over with passion for her, and longing feverishly for the hour to arrive when he could be with her again.

All day and all night he thought of her – of her gay and sparkling beauty, of her kisses and caresses, and the delightful coolness of her thin and supple hands. His mad infatuation for her made him oblivious to the taunts and jeers of the villagers, who seldom saw him without making ribald allusion to the poem.

“There goes Sansfeu! alias Monsieur Grosnez!” they called out. “Why don’t you cut off your nose for a present to mademoiselle? She would then have no need to buy a kitchen poker. Ha! ha! ha!”

But their coarse wit fell flat. Henri hardly heard it – all his thoughts, his burning love, his unquenchable passion, were centred in Mere Maxim: in spirit he was with her, alone with her, in the innermost recesses of the grim, silent forest.

The marriage eve came; he handed Beatrice the presents, and ere she had time to thank him – for the magnificence of the belt rendered her momentarily speechless – he had flown from the house, and was hurrying as fast as his legs could carry him to his tryst.

The shadows of night were already on the forest when he entered it; and the silence and solitude of the place, the indistinct images of the trees, and their dismal sighing, that seemed to foretell a storm, all combined to disturb his fancy and raise strange spectres in his imagination. The shrill hooting of an owl, as it rustled overhead, caused him an unprecedented shock, and the great rush of blood to his head made him stagger and clutch hold of the nearest object for support.

He had barely recovered from this alarm when his eyes almost started out of their sockets with fright as he caught sight of a queer shape gliding silently from tree to tree; and shortly afterwards he was again terrified – this time by a pale face, whether of a human being or animal he could not say, peering down at him from the gnarled and fantastic branches of a gigantic oak.

He was now so frightened that he ran, and queer – indefinably queer footsteps ran after him, and followed him persistently until he reached the shanty, when he heard them turn and leap lightly away.

On this occasion, the occurrence of Henri’s second visit, Mere Maxim was more captivating than ever. She was dressed with wonderful effect all in white. She wore sparkling jewels at her throat and waist, buckles of burnished gold on her shoes; her teeth flashed like polished ivory, and her nails like agates. Henri was enraptured. He fell on his knees before her, he caught her hands and covered them with kisses.

“How nice you look to-day, my sweetheart,” she said; “and how fat! It does my heart good to see you. Come in, and sit close to me, and tell me how you have fared.”

She led him in, and after locking and barring the door, conducted him to the chimney-corner. And there he lay in her arms. She fondled him; she pressed her lips on his, and gleefully felt his cheeks and arms. And after a time, when, intoxicated with the joy of it all, he lay still and quiet, wishing only to remain like that for eternity, she stooped down, and, fetching a knot of cord from under the seat, began laughingly to bind his hands and feet.

And at each turn and twist of the rope she laughed the louder. And when she had finished binding his arms and legs she made him lie on his back, and lashed him so tightly to the seat that, had he possessed the strength of six men, he could not have freed himself.

Then she sat beside him, and moving aside the clothes that covered his chest and throat, said: –

“By this time Beatrice – pretty Beatrice, vain and sensual Beatrice, the Beatrice you once loved and admired so much – will have worn the belt, will have eaten the sweets. She is now a werwolf.

Every night at twelve o’clock she will creep out of bed and glide about the house and village in search of human prey, some bonny babe, or weak, defenseless woman, but always some one fat, tender, and juicy – some one like you.”

And bending low over him, she bared her teeth, and dug her cruel nails deep into his flesh. A flame from the wood fire suddenly shot up. It flickered oddly on the figure of Mere Maxim – so oddly that Henri received a shock. He realized with an awful thrill that the face into which he peered was no longer that of a human being; it was – but he could no longer think – he could only gaze.

Promote Your Page Too
Bread Crumbs
A trail of bread crumbs, just in case you get lost in the widdershins ... Widdershins > Blog Page > Fairy Tales and Stories > A Witchy Werewolf Story