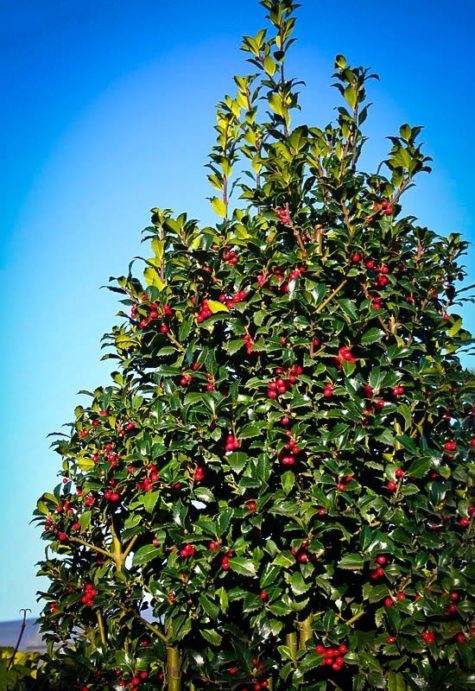 When Celtic leaders chose the next in line, he was crowned with a wreath of Holly. Holly was believed to chase away enemies. Holly tree people are known as “the rulers” of the Celtic zodiac. People born under the Holly zodiac have a regal air and status about them. They are often found in positions of power and will usually excel in those positions.

Here’s the rest of the story:

The Holly sign person takes on challenges easily, and overcomes obstacles with rare skill and tact. When you encounter setbacks, you simply redouble your efforts and remain ever vigilant to obtain your end goals. Very seldom are you defeated. This is why many people look up to you and follow you as their leader. You are competitive and ambitious even in the most casual settings.

Holly people are noble and take on an air of royalty. They can appear arrogant, but in reality they are just very confident in themselves and their abilities. When Holly tree people have obstacles in their lives they remain focused and determined to see it through and achieve their goals to the very end.

If the Holly Tree is your sign, you are cautious and think things through before acting. When you set your mind to something, you complete it despite the odds. You are very logical and practical. You are a natural leader and have a very strong sense of self.

You can appear to be arrogant but in actuality you’re just very confident in your abilities. Truth be known, you are quite generous, kind and affectionate (once people get to know you). Highly intelligent, you skate through academics where others may struggle. Because many things come to you so easily, you may have a tendency to rest on your laurels. In other words, if not kept active, you may slip into an unhealthy and lazy lifestyle.

Holly sign people rarely feel defeated and many people admire them as someone to look up to as a leader. They have a competitive nature even if it’s just a casual evening of playing games with family and friends. They are generous and loving to people once they get to know them.

Holly tree sign people are the most dominant in the Celtic zodiac. They are the creative extroverts who are strong willed and self confident. They love to live in luxury and because of their regal air will have a hard time settling for second best.

Holly tree people are born with good business sense. They are capable leaders, but surprisingly may prefer to be in the background rather than lead.

They are full of energy and often spread positive, optimistic energy all around them. They see the glass as half full instead of half empty and are not easily discouraged by setbacks.

The Holly sign person can be very straightforward and blunt with what they have to say. They demand loyalty from those that are closest to them as they also demand loyalty of themselves.

Celtic Holly tree sign people have a tendency to be too trusting making them gullible. They are generous to a fault to the people they care about. They often make errors in the judgement of people’s character and can often put those they love on a pedestal.

They are unable to see any flaws or wrongdoing. This often leaves them disappointed in their personal relationships. It’s in their nature to recover quickly from this disappointment, but may also lead them to have many romantic affairs.

They love beauty and seek out pleasure.Their attraction to perfection leads them to seek out one beautiful partner after another. They can be quick tempered and very blunt when angry, which may turn off many people.

Their intelligent minds need to be kept active or they have the tendency to become lazy, complacent, and unhealthy.

Ironically, they are very hurt when someone else acts hostile towards them. They are very sensitive to criticism especially that which threatens their sense of dominance. This can make them go into a sudden rage over their hurt feelings.

If you were born durning the first two weeks of the Celtic Holly Zodiac Sign, you are a New Moon Holly. You enjoy helping people reach their goals, whether it’s by lending a helping hand, a shoulder to cry on, or financial assistance. It’s easy for you to tt in arguments with your family. You’re such a caring person that others don’t always see you only want to help. Whatever your profession, you might find yourself to be an overnight success.

If you were born during the last two weeks of the Celtic Holly Zodiac Sign, you are a Full Moon Holly. You enjoy history and tradition. You are very affectionate and popular with others, but you can have trouble handling criticism. You enjoy entertaining and have a lot of luck in your life. You have a great mind for business and can find yourself surrounded by a lot of material wealth.

Promote Your Page Too
Breadcrumbs
A trail of breadcrumbs in case you lose your way... Sigils Symbols and Signs > Newest Symbols > Astrology Signs > Sign of the Holly Tree