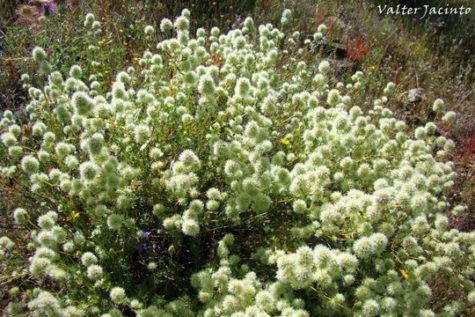 Thymus mastichina is a very special thyme, native in the mountains of the Iberian Peninsula, Central Spain and Portugal. It is known by a number of different common names including Spanish Marjoram, Spanish Wood Marjoram, White Thyme, Wild Marjoram or Mastic Thyme.

I could not find anything about the magickal properties of this specific plant, and so I would assume that because it is a variety of Thyme, the magickal purposes would be the same as for common Thyme, but possibly with a wilder energy or effect. These would include the following:

Here is what I did find out about this herb:

As the name implies it grows primarily in Spain. Thymus mastichina produces tiny, oval-shaped, green leaves, which have an intense flavor. In its Spanish homeland it is used as a culinary herb for meat dishes, stews and sauces and because of its strong aroma has been commonly used in Andalucía to season and preserve olives.

Despite this fact, it is prized more for its essential oils than for its herbal properties. The plant has an herbaceous scent with eucalyptus-like overtones with a hint of a vanilla note, which, in aromatherapy, is used for its soothing, relaxing effect. It’s oil is pale orange to amber in color and has a distinctive eucalyptus like aroma. It is also considered to be especially beneficial in relaxing muscles.

Used fresh or in dried form, its leaves are used to make an herbal tea that is considered useful in treating sore throats, catarrh and colds. If preferred, the tea can be used to gargle with rather than ingested. Infusions are attributed curative or palliative properties of arthritis and rheumatism. Mastic Thyme, may be effective in protecting against colon cancer.

The species name mastichina and the common name of Mastic Thyme derive from the Greek word massein, meaning ‘to chew’, or the verb mastichein meaning ‘to gnash the teeth’. It is the origin of the English word masticate.

Interestingly, the Mastic Tree is a small Mediterranean evergreen tree (Pistacia lentiscus) of the cashew family. The tree produces an aromatic, ivory-coloured resin, also known as mastic, is harvested as a spice from the cultivated mastic trees grown in the south of the Greek island of Chios in the Aegean Sea. Mastic resin is a relatively expensive kind of spice that has been used principally as a chewing gum. The flavor can be described as a strong, slightly smoky, resiny aroma.

Thyme was used it as incense, for its balsamic odor. The antiseptic properties of Thyme were also fully recognized in classic times, there being a reference in Virgil’s Georgics to its use as a fumigator, and Pliny tells us that, when burnt, it puts to flight all venomous creatures.

Others derive the name from the Greek word thumus, signifying courage, the plant being held in ancient and mediaeval days to be a great source of invigoration, its cordial qualities inspiring courage.

Lady Northcote (in The Herb Garden) says that among the Greeks, Thyme denoted graceful elegance; ‘to smell of Thyme’ was an expression of praise, applied to those whose style was admirable. It was an emblem of activity, bravery and energy, and in the days of chivalry it was the custom for ladies to embroider a bee hovering over a sprig of Thyme on the scarves they presented to their knights.