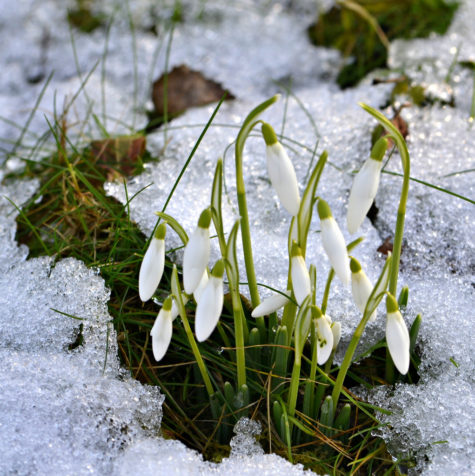 Snowdrops are often assigned to the month of January, and I’m not sure why because these little flowers are  also known as “Candlemas Bells”.  February 2nd is Candlemas (Festival Day of Candles), and Imbolc.  The ancient festival marks the midpoint of winter and some recognize it as the last day of the forty day Christmas season.  In the catholic tradition, candles were brought into the church and blessed as a symbol of hope and light. In a time of no electric lights, candlelight offered great protection and comfort during the dark days of winter.

By producing their own heat, snowdrops actually melt the snow in their surroundings. Like candles, Snowdrops offer us our own light of hope in the grey of winter days. They are the emblems of friendship in adversity, harbingers of spring.

The first sight of snowdrops growing wild represents the passing of sorrow. In various religions, they are a sign from the gods that good times will come once more. According to one Christian tale, an angel turned falling snowflakes into flowers to give Adam and Eve a sign of hope after evicting them from the Garden of Eden.

The fact that snowdrops are often found, in abundance, in the old convent gardens, it was believed that this little white flower was sacred to virgins. For this reason, it was dedicated to the Virgin Mary. In some places, during the Candlemas celebration, it was customary for young women, wearing white gowns, to walk in procession carrying snowdrops in their hands.

It was often said that any one wearing a snowdrop would have only pure and lofty thoughts; and that if a young girl ate the first snowdrop she found in spring, neither sun nor wind would tan her that summer.

The snowdrop flower – which is well loved not only for its simple beauty, but for its distinct, honey-like scent – has a surprisingly varied history in both ancient folklore and more modern storytelling. In Grimm brother’s original version of the fairy tale nowadays known as Snow White, the main character’s name was actually Snow Drop.

Every spring on March 1, the national Moldovan holiday, is celebrated. On this day people present each other with the traditional flowers. One of the old Moldovan legend says that once in a fight with the winter witch, that didn’t want to give up its place, the beautiful lady Spring cut her finger and few drops of her blood fell on the snow, which melted. Soon on this place grew a snowdrop and in such a way the spring won the winter.

However, in some folklore, snowdrops are seen as unlucky. The reason for this is perhaps that they often grow in cemeteries and churchyards. Along with other white flowers, superstition says it is courting disaster to bring snowdrops into the house. To do so is to invite death into the home, can mean the parting of a loved one and, in the west country, is thought to cause eggs to turn addled. One should never even pick wild snowdrops, especially from a graveyard. The sight of a single snowdrop blooming in the garden foretells of impending disaster.

According to Are You Superstitious, by Lore Cowan, it is particularly unlucky to bring snowdrops, or “Candlemas bells”, into the house on February 2nd, which is Candlemas, or Imbolc, and if you wish to be married within the year you should not bring them into the house on Valentine’s Day, 14th February.

Snowdrops have their use in medicine. The alkaloid Galantamine, which was first isolated from snowdrops, has been used to treat Alzheimer’s disease, neuritis and neuralgia. In parts of eastern Europe, rubbing snowdrops on the forehead was at one time a folk remedy used as pain relief.

Andreas Plaitakis and Roger Duvoisin in 1983 suggested that the mysterious magical herb moly that appears in Homer’s Odyssey is actually snowdrop. An active substance in snowdrop is called galantamine, which, as an acetylcholinesterase inhibitor, could have acted as an antidote to Circe’s poisons.

Note: This post was compiled by Shirley Twofeathers for Magical Ingredients, you may repost and share without karmic repercussions, but only if you give me credit and a link back to this website. Blessed be.