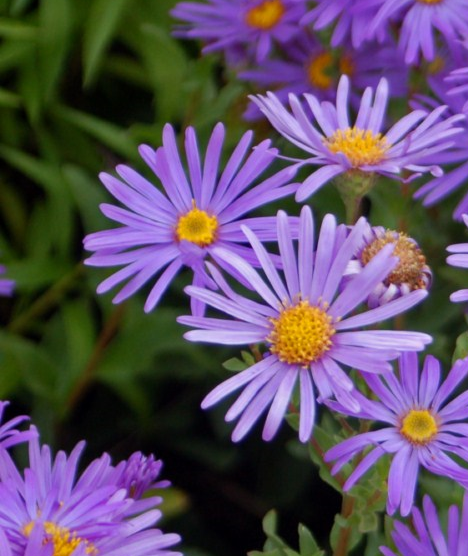 Also known as starworts, Michaelmas daisies or Frost flowers, the name aster is derived from the Greek word for “star,” This is largely due to the shape of the flower’s head; however, it is also because they grow in a spotted abundance and have an appearance similar to that of the stars in the sky.

With their wildflower beauty and lush texture, asters have long been considered an enchanted flower. The Greeks and Romans believed this flower was sacred to the gods and so wreaths of asters were placed on their altars.

In mythology, asters were said to have grown from the tears of the goddess Asterea. This ancient myth arises from the Iron Age, when people learned to make weapons of iron, the god Jupiter, was angered by all the fighting with these iron weapons that he decided to destroy the entire race by a flood. The gods fled the earth and the last to go, the goddess Astraea, was so saddened that she asked to be turned into a star. When the flood waters receded, all that was left was mud and slime. Astraea felt so sorry for them she wept, her tears falling as stardust which turned to lovely starflowers or asters. while she wept for the lack of stars on earth.

Roman mythological legend holds that one of the dryads presiding over the forest, meadows and pastures, the nymph Belides, was responsible for the origin of this flower. While dancing on the turf at the edge of the forest with the other nymphs, Belides attracted the admiration of the deity who presided over the orchards whose name was Vertumnus. She transformed herself into the flower bellis, it’s botanical name, to escape the pursuit of Vertumnus. The bellis flower is derived from the Anglo-Saxon “daeges eage”  (day’s eye) from the habit of this flower to close its petals at night and on dark rainy days.

Another legend has it that the fields bloomed with asters when Virgo scattered stardust on the earth.

Asters are ancient wildflowers of the daisy family, and attract butterflies to your yard. There are over 600 species of aster, the most popular being the Monte Casino. These star-like flowers can be found in a rainbow of colors – white, red, pink, purple, lavender and blue, with mostly yellow centers.

Asters are sacred to Venus. Incorporate asters into spells and charms to enhance loving vibrations and healthy emotions. Adding these beautiful flowers to your garden brings love and contentment to your entire household.

Historically, aster flowers have had many uses. One of the best known is their use when placed upon the graves of French soldiers; these flowers were meant to symbolize afterthought, the wish that things had turned out differently, and to represent a desire for the reversal of the outcome of their battles.  In China, they signify fidelity.

Known as “Eye of Christ” in France and “Starwort” in England and Germany, asters were thought to carry magical powers. The early English name, Starwort, was later changed to Michaelmas Daisy, as it blooms around St. Michaelmas Day in September.

In ancient Greece, aster leaves were burned, as it was thought that the smokey perfume would keep ward off wicked spirits and drive away serpents.

Asters may also be used for their strong medicinal properties. Some varieties of this flower are said to help with migraines, general headaches and colds, while others can aid in treating the pain of sciatica and muscle spasms. Virgil wrote that the flavor of honey would be improved if asters were boiled in wine and placed near a beehive.

In addition to having a wide array of colors to choose from, the aster flower also has a good deal of meaning to go alongside its good looks. In general, the aster is considered a symbol of patience, daintiness, and a love of variety. Others state that this flower is an emblem for refinement and elegance.

As a gift, asters placed in a bouquet with complementing flowers can be representative of love and admiration. They are often given to those born in September, or those celebrating a 20th wedding anniversary. As a more unique gift, you might present a single fresh or dried flower to a lover or friend as a love charm, as asters were thought by some ancient Greeks to hold the mystic power of drawing forth affection.

Found at: Flower Info and Meanings and Legends of Flowers

One Response to Aster Magick