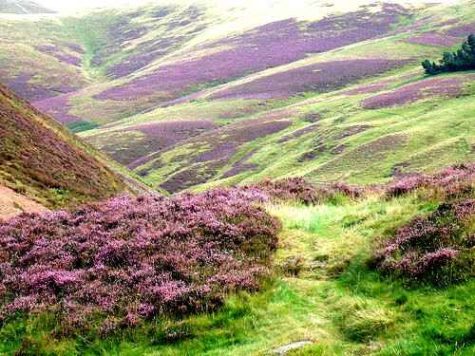 Heather is sacred to the Summer Solstice, the date of which varies slightly from year to year, and falling between June 20 and June 22.

When worn or carried, this virginal flower wards off unwanted sexual advances. It essentially tones down the passions. Carry as a guard against rape. Take a bath in heather flowers, preferably during the moon’s waning phase, to help break sex addictions. Wear heather oil to bring a relationship back to a friendship.

Burn with fern to attract rain.

Add the flowers to a floor wash to bless the home. Sprinkle some around the workplace to calm down a tyrannical boss.

Heather is considered a lucky plant, and sometimes gypsies sell sprigs of it for luck. White heather is the luckiest variety, but in Scotland people have doubts about this. This is because a sprig of it was given to Bonnie Prince Charlie in 1745, and it did him no good at all.

Heather is associated with the sun, and with the planet of Venus. Its color is resin colored and its element is water. Heather’s bird is the lark, and its animal association is the honey bee. In ancient times the Danes brewed a powerful beer made from honey and Heather. And for centuries the heather flowers have also been a special beverage to the bee, who in return creates delightful Heather honey! Its stones are amethyst, peridot, and amertine – and it is a feminine herb. The herb is sacred to many Goddesses: Isis, Venus-Erycina, Uroica, Garbh Ogh, Cybele, Osiris, Venus, Guinevere, and Butes among them.

White Heather was considered unlucky by Scottish loyalists because of its connection with the banishment of Bonny Prince Charles. Heather is the home to a type of Fey called Heather Pixies. Like other Pixies, the Heather Pixies have clear or golden auras and delicate, translucent wings. But these faeries are attracted specifically to the moors and to the Heather which covers them. They are not averse to human contact, but they don’t seek them out. They have a pranksterish nature. 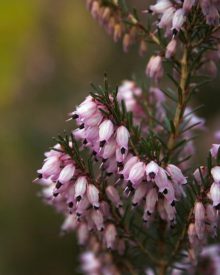 Heather is used for magick involving maturity, consummation, general luck, love, ritual power, conjuring ghosts, healing, protection, rain-making and water magick. Charms made with Heather can be worn or carried as protection against danger, rape and other violent crimes.

This flower represents good fortune and Heather can also be carried as a lucky charm. It was believed that wearing the blossom associated with your month of birth would bring exceptionally good luck – therefore people born in the month of Heather (August) should carry White Heather, for even better luck throughout the year.

Legend has it that a gift of white Heather brings luck to both the giver and the receiver, whereas red Heather is said to have been colored by heathens killed in battle by Christians, so is less lucky.

Heather is associated with secrets from the Otherworld. A sprig of white Heather placed in a special place of silence and meditation has the power to conjure ghosts, haints or spirits.

After picking a piece of white Heather at midnight, place it in a glass of river water in the darkest corner of your home. Sit and think of a departed loved one and it is said that the loved ones shadow will visit you.

Heather is said to ignite faery passions and open portals between their world and our own. Heather represents solitude because it thrives in wide open spaces, and Faeries who enjoy living in such undisturbed places are said to feast on the tender stalks of Heather. The Fae of this flower are drawn to humans who are shy.

Heather is useful for Solitary healing work (going within). Heather, if used along with Mistletoe, creates powerful healing medicine in both spiritual and physical aspects.

Heather can be used at Midsummer to promote love – carry red Heather for passion or white Heather for cooling the passion of unwanted suitors. If you give someone a gift of Heather it means: ‘Admiration’. A charm bag filled with Heather can be carried for decreasing egotism or self-involvement.

As a water herb, Heather is very useful in weather magick. When burned outdoors with Fern, the herbal smoke of Heather attracts rain. Bouquets of Heather and Fern can also be dipped in water to call rain.

3 Responses to Heather Magick and Lore