Rune poems were created as mnemonic aids for remembering the rune symbols, their names, meanings and properties. Here is a very old Runic poem: 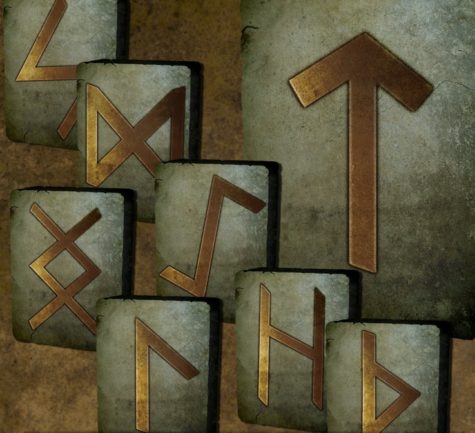 Wealth is a source of discord among kinsmen;
the wolf lives in the forest.

Dross comes from bad iron;
the reindeer often races over the frozen snow.

Estuary is the way of most journeys;
but a scabbard is of swords.

Riding is said to be the worst thing for horses;
Reginn forged the finest sword.

Ulcer is fatal to children;
death makes a corpse pale.

Hail is the coldest of grain;
Christ created the world of old.

Constraint gives scant choice;
a naked man is chilled by the frost.

Ice we call the broad bridge;
the blind man must be led.

Plenty is a boon to men;
I say that Frodi was generous.

Sun is the light of the world;
I bow to the divine decree.

Tyr is a one-handed god;
often has the smith to blow.

Birch has the greenest leaves of any shrub;
Loki was fortunate in his deceit.

Man is an augmentation of the dust;
great is the claw of the hawk.

A waterfall is a River which falls from a mountain-side;
but ornaments are of gold.

Yew is the greenest of trees in winter;
it is wont to crackle when it burns.

From: Runic and Heroic Poems by Bruce Dickins

Promote Your Page Too
Bread Crumbs
A trail of bread crumbs, just in case you get lost in the widdershins ... Widdershins > Blog Page > Poetry > The Old Norse Rune Poem