Rune poems were created as mnemonic aids for remembering the rune symbols, their names, meanings and properties. There are a number of them, and the meanings given vary slightly with each rendition and translation. This comes from the Anglo-Saxon tradition, and has been rendered in modern English. 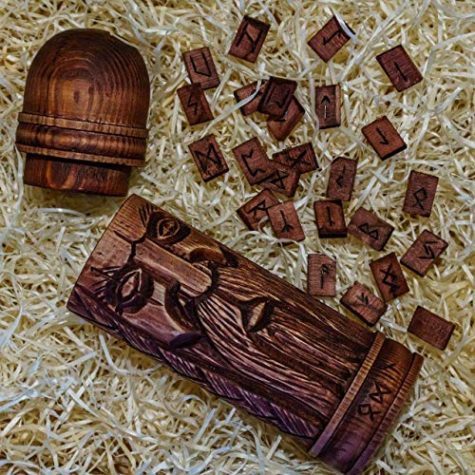 Wealth is a comfort to all men;
yet must every man bestow it freely,
if he wish to gain honour in the sight of the Lord.

The aurochs is proud and has great horns;
it is a very savage beast and fights with its horns;
a great ranger of the moors, it is a creature of mettle.

The thorn is exceedingly sharp,
an evil thing for any knight to touch,
uncommonly severe on all who sit among them.

The mouth is the source of all language,
a pillar of wisdom and a comfort to wise men,
a blessing and a joy to every knight.

Riding seems easy to every warrior while he is indoors
and very courageous to him who traverses the high-roads
on the back of a stout horse.

The torch is known to every living man by its pale, bright flame;
it always burns where princes sit within.

Generosity brings credit and honour, which support one’s dignity;
it furnishes help and subsistence
to all broken men who are devoid of aught else.

Bliss he enjoys who knows not suffering, sorrow nor anxiety,
and has prosperity and happiness and a good enough house.

Hail is the whitest of grain;
it is whirled from the vault of heaven
and is tossed about by gusts of wind
and then it melts into water.

Trouble is oppressive to the heart;
yet often it proves a source of help and salvation
to the children of men, to everyone who heeds it betimes.

Ice is very cold and immeasurably slippery;
it glistens as clear as glass and most like to gems;
it is a floor wrought by the frost, fair to look upon.

Summer is a joy to men, when God, the holy King of Heaven,
suffers the earth to bring forth shining fruits
for rich and poor alike.

The yew is a tree with rough bark,
hard and fast in the earth, supported by its roots,
a guardian of flame and a joy upon an estate.

Peorth is a source of recreation and amusement to the great,
where warriors sit blithely together in the banqueting-hall.

The Eolh-sedge is mostly to be found in a marsh;
it grows in the water and makes a ghastly wound,
covering with blood every warrior who touches it.

The sun is ever a joy in the hopes of seafarers
when they journey away over the fishes’ bath,
until the courser of the deep bears them to land.

Tir is a guiding star; well does it keep faith with princes;
it is ever on its course over the mists of night and never fails.

The poplar bears no fruit; yet without seed it brings forth suckers,
for it is generated from its leaves.
Splendid are its branches and gloriously adorned
its lofty crown which reaches to the skies.

The horse is a joy to princes in the presence of warriors.
A steed in the pride of its hoofs,
when rich men on horseback bandy words about it;
and it is ever a source of comfort to the restless.

The joyous man is dear to his kinsmen;
yet every man is doomed to fail his fellow,
since the Lord by his decree will commit the vile carrion to the earth.

The ocean seems interminable to men,
if they venture on the rolling bark
and the waves of the sea terrify them
and the courser of the deep heed not its bridle.

Ing was first seen by men among the East-Danes,
till, followed by his chariot,
he departed eastwards over the waves.
So the Heardingas named the hero.

An estate is very dear to every man,
if he can enjoy there in his house
whatever is right and proper in constant prosperity.

Day, the glorious light of the Creator, is sent by the Lord;
it is beloved of men, a source of hope and happiness to rich and poor,
and of service to all.

The oak fattens the flesh of pigs for the children of men.
Often it traverses the gannet’s bath,
and the ocean proves whether the oak keeps faith
in honourable fashion.

The ash is exceedingly high and precious to men.
With its sturdy trunk it offers a stubborn resistance,
though attacked by many a man.

Yr is a source of joy and honour to every prince and knight;
it looks well on a horse and is a reliable equipment for a journey.

Iar is a river fish and yet it always feeds on land;
it has a fair abode encompassed by water, where it lives in happiness.

The grave is horrible to every knight,
when the corpse quickly begins to cool
and is laid in the bosom of the dark earth.
Prosperity declines, happiness passes away
and covenants are broken.

From : Runic and Heroic Poems, by Bruce Dickins.

Promote Your Page Too
Bread Crumbs
A trail of bread crumbs, just in case you get lost in the widdershins ... Widdershins > Blog Page > Poetry > The Anglo-Saxon Rune Poem