Encounter With A Werewolf Spirit

From the book Werwolves, by Elliott O’Donnell, first published in 1912, we have this account of what might well be the earth-bound spirit of a Werewolf. 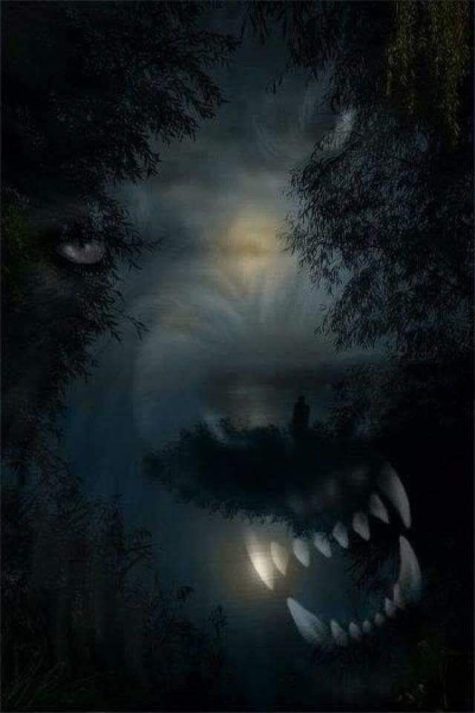 A Miss St. Denis told me she was once staying on a farm, in Merionethshire, where she witnessed a phenomenon of this class. The farm, though some distance from the village, was not far off the railway station, a very diminutive affair, with only one platform and a mere box that served as a waiting-room and booking-office combined. It was, moreover, one of those stations where the separate duties of station-master, porter, booking-clerk, and ticket-collector are performed by one and the same person, and where the signal always appears to be down.

As the platform commanded the only paintable view in the neighbourhood, Miss St. Denis often used to resort there with her sketch-book. On one occasion she had stayed rather later than usual, and on rising hurriedly from her camp-stool saw, to her surprise, a figure which she took to be that of a man, sitting on a truck a few yards distant, peering at her. I say to her surprise, because, excepting on the rare occasion of a train arriving, she had never seen anyone at the station besides the station-master, and in the evening the platform was invariably deserted.

The loneliness of the place was for the first time brought forcibly home to her. The station-master’s tiny house was at least some hundred yards away, and beyond that there was not another habitation nearer than the farm. On all sides of her, too, were black, frowning precipices, full of seams and fissures and inequalities, showing vague and shadowy in the fading rays of the sun.

Here and there were the huge, gaping mouths of gloomy slate quarries that had long been disused, and were now half full of foul water. Around them the earth was heaped with loose fragments of rock which had evidently been detached from the principal mass and shivered to pieces in the fall. A few trees, among which were the black walnut, the slippery elm, and here and there an oak, grew among the rocks, and attested by their dwarfish stature the ungrateful soil in which they had taken root.

It was not an exhilarating scene, but it was one that had a peculiar fascination for Miss St. Denis – a fascination she could not explain, and which she now began to regret.

The darkness had come on very rapidly, and was especially concentrated, so it seemed to her, round the spot where she sat, and she could make nothing out of the silent figure on the truck, save that it had unpleasantly bright eyes and there was something queer about it. She coughed to see if that would have any effect, and as it had none she coughed again.

Then she spoke and said, “Can you tell me the time, please?”

But there was no reply, and the figure still sat there staring at her. Then she grew uneasy and, packing up her things, walked out of the station, trying her best to look as if nothing had occurred. She glanced over her shoulder; the figure was following her. Quickening her pace, she assumed a jaunty air and whistled, and turning round again, saw the strange figure still coming after her.

The road would soon be at its worst stage of loneliness, and, owing to the cliffs on either side of it, almost pitch dark. Indeed, the spot positively invited murder, and she might shriek herself hoarse without the remotest chance of making herself heard. To go on with this outre figure so unmistakably and persistently stalking her, was out of the question.

Screwing up courage, she swung round, and, raising herself to her full height, cried: “What do you want? How dare you?”

She got no further, for a sudden spurt of dying sunlight, playing over the figure, showed her it was nothing human, nothing she had ever conceived possible. It was a nude grey thing, not unlike a man in body, but with a wolf’s head. As it sprang forward, its light eyes ablaze with ferocity, she instinctively felt in her pocket, whipped out a pocket flash-light, and pressed the button. The effect was magical; the creature shrank back, and putting two paw-like hands in front of its face to protect its eyes, faded into nothingness.

She subsequently made inquiries, but could learn nothing beyond the fact that, in one of the quarries close to the place where the phantasm had vanished, some curious bones, partly human and partly animal, had been unearthed, and that the locality was always shunned after dusk. Miss St. Denis thought as I did, that what she had seen might very well have been the earth-bound spirit of a werwolf.

Promote Your Page Too
Bread Crumbs
A trail of bread crumbs, just in case you get lost in the widdershins ... Widdershins > Blog Page > Fairy Tales and Stories > Encounter With A Werewolf Spirit