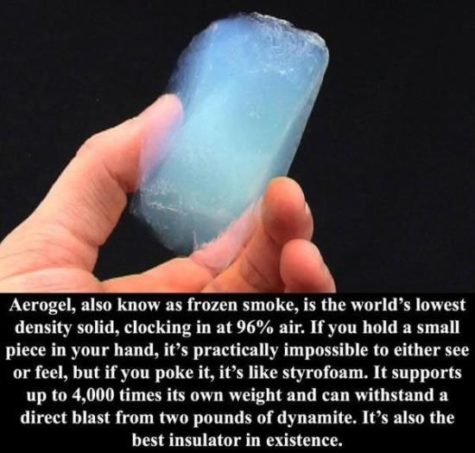 Aerogel is made from Silicon Dioxide, the same material as ordinary glass, only 1,000 times less dense.

Developed by NASA, Aerogel is the lightest and lowest-density solid known to exist. A truly remarkable material, Aerogel holds an unbelievable 15 entries in the Guinness Book of World Records, including best insulator and lowest density solid.

Aerogel is composed of amorphous Silicon Dioxide, and 99.8% Air. Its melting point is 2,200 degrees F (1,200 degrees C). Being the world’s lightest known solid, it weighs only three times that of air (with a density of just 3 milligrams per cubic centimeter). 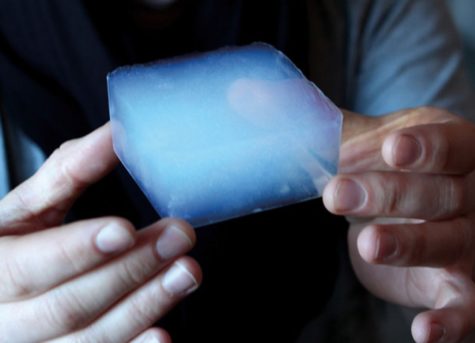 When handled, Aerogel feels like a very light, hard foam. Being chemically similar to glass, it also happens to shatter like glass, yet is incredibly strong structurally, and can support thousands of times its own weight. Theoretically, a block weighing less than a pound could support a weight of half a ton.

Due to its microstructure, Aerogel is a powerful desiccant, rapidly absorbing any moisture in your fingertips when held. This usually leaves some dry spots on the skin that disappear in a short time.

Chinese material scientists have created the world’s lightest material: A graphene aerogel that is seven times lighter than air, and 12% lighter than the previous record holder (aerographite). A cubic centimeter of the graphene aerogel weighs just 0.16 milligrams — or, if you’re having a problem conceptualizing that, a cubic meter weighs just 160 grams (5.6 ounces). The graphene aerogel is so light that an cube inch of the stuff can be balanced on a blade of grass, the stamen of a flower, or the fluffy seed head of a dandelion. 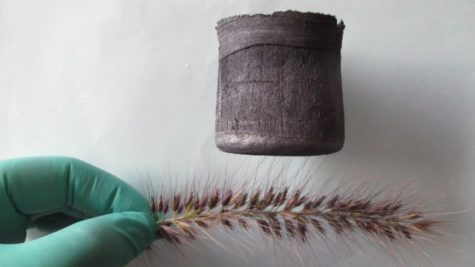 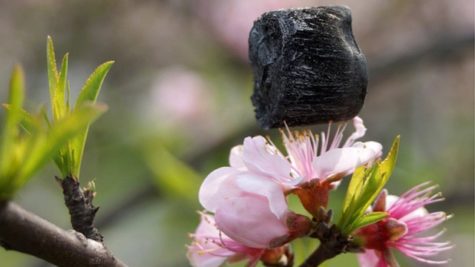 Most aerogels are produced using a sol-gel process, where a gel is dehydrated until only the aerogel remains. Some aerogels are also produced using the template  method — aerographite, for example, is created by growing carbon on a lattice (template) of zinc oxide crystals — and then the zinc oxide is removed in an oven, leaving just the carbon aerogel.

To create the graphene aerogel, however, researchers at Zhejiang University use a novel freeze-drying method. Basically, it seems like the researchers  create a solution of graphene and carbon nanotubes, pour it into a mold, and then freeze dry it. Freeze drying dehydrates the solution, leaving single-atom-thick layers of graphene, supported by carbon nanotubes. The researchers say that there’s no limit to the size of the container: You could make a mini graphene aerogel using this process, or a meter-cubed aerogel if you wish.