The Turtle
A story by John Steinbeck 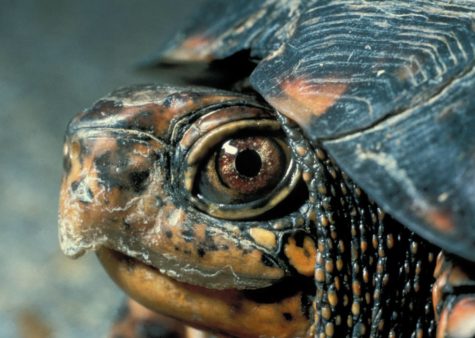 The concrete highway was edged with a mat of tangled, broken, dry grass, and the grass heads were heavy with oat beards to catch on a dog’s coat, and foxtails to tangle in a horse’s fetlocks, and clover burrs to fasten in sheep’s wool; sleeping life waiting to be spread and dispersed, every seed armed with an appliance of dispersal, twisting darts and parachutes for the wind, little spears and balls of tiny thorns, and all waiting for animals or the hem of a woman’s skirt, all passive but armed with appliances of activity, still, but each possessed of the anlage of movement.

The sun lay on the grass and warmed it, and in the shade under the grass the insects moved, ants and ant lions to set traps for them, grasshoppers to jump into the air and flick their yellow wings for a second, sow bugs like little armadillos, plodding restlessly on many tender feet. And over the grass at the roadside a land turtle crawled, turning aside for nothing, dragging his high-domed shell over the grass: His hard legs and yellow-nailed feet threshed slowly through the grass, not really walking, but boosting and dragging his shell along. The barley beards slid off his shell, and the clover burrs fell on him and rolled to the ground. His horny beak was partly opened, and his fierce, humorous eyes, under brows like fingernails, stared straight ahead.

He came over the grass leaving a beaten trail behind him, and the hill, which was the highway embankment, reared up ahead of him. For a moment he stopped, his head held high. He blinked and looked up and down. At last he started to climb the embankment. Front clawed feet reached forward but did not touch. The hind feet kicked his shell along, and it scraped on the grass, and on the gravel. As the embankment grew steeper and steeper, the more frantic were the efforts of the land turtle. Pushing hind legs strained and slipped, boosting the shell along, and the horny head protruded as far as the neck could stretch.

Little by little the shell slid up the embankment until at last a parapet cut straight across its line of march, the shoulder of the road, a concrete wall four inches high. As though they worked independently the hind legs pushed the shell against the wall. The head upraised and peered over the wall to the broad smooth plain of cement. Now the hands, braced on top of the wall, strained and lifted, and the shell came slowly up and rested its front end on the wall.

For a moment the turtle rested. A red ant ran into the shell, into the soft skin inside the shell, and suddenly head and legs snapped in, and the armored tail clampled in sideways. The red ant was crushed between body and legs. And one head of wild oats was clamped into the shell by a front leg.

For a long moment the turtle lay still, and then the neck crept out and the old humorous frowning eyes looked about and the legs and tail came out. The back legs went to work, straining like elephant legs, and the shell tipped to an angle so that the front legs could not reach the level cement plain. But higher and higher the hind legs boosted it, until at last the center of balance was reached, the front tipped down, the front legs scratched at the pavement, ad it was up. But the head of wild oats was held by its stem around the front legs.

Now the going was easy, and all the legs worked, and the shell boosted along, waggling from side to side. A sedan driven by a forty-year-old woman approached, She saw the turtle and swung to the right, off the highway, the wheels screamed and a cloud of dust boiled up. Two wheels lifted for a moment and then settled. The car skidded back onto the road, and went on, but more slowly. The turtle had jerked into its shell, but now it hurried on, for the highway was burning hot.

And now a light truck approached, and as it came near, the driver saw the turtle and swerved to hit it. His front
wheel struck the edge of the shell, flipped the turtle like a tiddly-wink, spun it like a coin, and rolled it off the highway. The truck went back to its course along the right side.

Lying on its back, the turtle was tight in its shell for a long time. But at last its legs waved in the air, reaching for something to pull it over. Its front foot caught a piece of quartz and little by little the shell pulled over and flopped upright. The wild oat head fell out and three of the spearhead seeds stuck in the ground. And as the turtle crawled on down the embankment, its shell dragged dirt over the seeds. The turtle entered a dust road and jerked itself along, drawing a wavy shallow trench in the dust with its shell. The old humorous eyes looked ahead, and the horny beak opened a little. His yellow toe nails slipped a fraction in the dust.