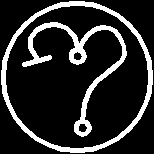 The Seventh Name is ASARULUDU.

Wielder of the Flaming Sword, oversees the Race of Watchers at the bidding of the Elder Gods. He ensures the most perfect safety, especially in dangerous tasks undertaken at the behest of the Astral Gods, his Word is BANMASKIM.

Like the Angel in Genesis, this Spirit protects a place, a home or temple, from negative psychic and magickal attacks. Like the Sixth Spirit, merely the pronunciation of his Word BANMASKIM is sufficient to dispel hostile influences when shouted to the four quarters. Maskim and Rabisu are the names of ancient Sumerian demons.

Promote Your Page Too
Breadcrumbs
A trail of breadcrumbs in case you lose your way... Sigils Symbols and Signs > Newest Symbols > Sword