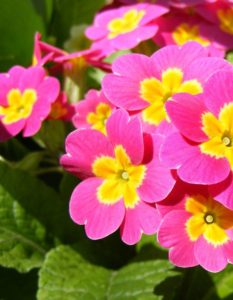 Often associated with the month of February, the Primrose flower symbolizes patience, kindness and gentleness. The Primrose also brings the meaning of belonging, and nurturing. Primrose is used magically as a symbol to meditate upon to draw protection and love, Oil of primrose has been used to cleanse and purify in the Druidic tradition. This wildflower is also used to symbolize the beloved guest.

Primroses attract fairies to the garden.

If you grow primroses in your garden, take very good care of them. Unhealthy primroses upset the fairies and it is not recommended to have cross fairies. If kept indoors, Primroses are said to bring sickness and sorrow, perhaps this is because they generally do not grow well indoors and upset the fairies.

The pendant flowers of the cowslip, Primula veris, were sometimes called “Key Flower” in England because they were thought to resemble a hanging bunch of keys. The association with keys may also have led to another common name, “Herb Peter,” because the symbol of St. Peter is a bunch of keys.  Ancient Norse peoples celebrated this primrose as a symbol of the goddess Freya, known as the “Key Virgin.”

According to the “language of flowers” Primroses symbolize youth or young love, or mean “I can’t live without you.” Lilac-tinted primroses signify confidence and red primroses symbolize unappreciated merit. In the Chakra System, it is believed that the Primrose combines the solar plexus and heart chakras.

The flowers of some primroses, especially Primula vulgaris, are edible. They can be eaten raw in salads or as an edible garnish, and can also be made into conserves (preserves). P. vulgaris flowers can be combined with yeast and sugar and fermented into wine.

In traditional herbal medicine, cowslip wine, made from P. veris, was used as a sedative. When the flowers were boiled with sugar to make a syrup, the concoction was used to treat palsy as well as nervousness. The juice of the flowers, either used alone or combined with other ingredients into an ointment, was supposed to be effective at treating facial spots and wrinkles. An old gypsy cure for skin complaints on the face: take three primrose leaves and boil them in a pint of water, drink the water
Collected from various sources including Garden Guides
Posted in Flowers | Tagged Fairies, Love, Protection