The Kalevala recounts a battle of wits between three wizard brothers and the witch goddess, Louhi. It is a treasure trove of ancient shamanistic practices and spells. Here’s a reading: 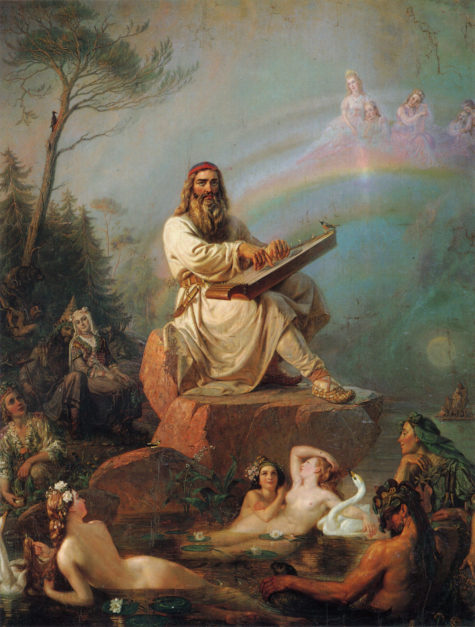 Then the singer of Wainola
Took the harp of his creation,
Quick adjusting, sweetly tuning,
Deftly plied his skillful fingers
To the strings that he had fashioned.
Now was gladness rolled on gladness,
And the harmony of pleasure
Echoed from the hills and mountains:
Added singing to his playing,
Out of joy did joy come welling,
Now resounded marvelous music,
All of Northland stopped and listened.
Every creature in the forest,
All the beasts that haunt the woodlands,
On their nimble feet came bounding,
Came to listen to his playing,
Came to hear his songs of joyance.
Leaped the squirrels from the branches,
Merrily from birch to aspen;
Climbed the ermines on the fences,
O’er the plains the elk-deer bounded,
And the lynxes purred with pleasure;
Wolves awoke in far-off swamp-lands,
Bounded o’er the marsh and heather,
And the bear his den deserted,
Left his lair within the pine-wood,
Settled by a fence to listen,
Leaned against the listening gate-posts,
But the gate-posts yield beneath him;
Now he climbs the fir-tree branches
That he may enjoy and wonder,
Climbs and listens to the music
Of the harp of Wainamoinen.

The epic poem, Kalevala, is celebrated by the Finns this day (February 28) with parades and readings from the poem. The Kalevala is a 19th century work of epic poetry compiled by Elias Lönnrot from Finnish and Karelian oral folklore and mythology. The above translation is by John Martin Crawford,

Promote Your Page Too
Bread Crumbs
A trail of bread crumbs, just in case you get lost in the widdershins ... Widdershins > Blog Page > Poetry > Wainamoinen’s Harp Songs