‘Twas the night before Yule 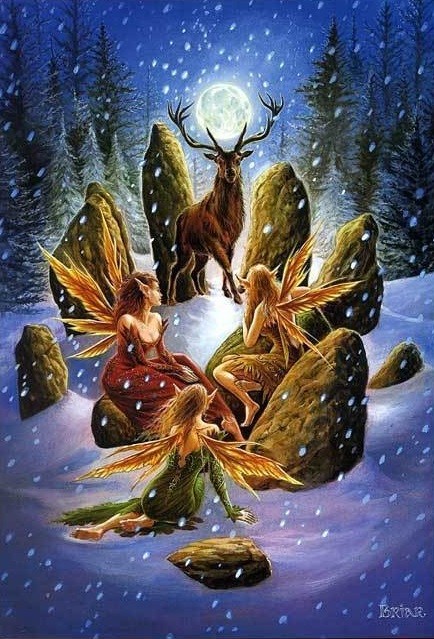 ‘Twas the night before Yule, and all through the Coven,
The cookies were baked and removed from the oven.
The bayberry candles were lit on the table,
The altar was wrapped in a new cloth of sable.

The children were nestled, all snug in their beds,
While visions of Yuletime danced in their heads.
Their stockings were hung by the chimney with care,
In hopes that some presents soon would be there!

With Rocker in his new robe, and I in mine,
We were asking our Goddess her blessing divine.
When out on the lawn there arose such a clatter,
We sprang from our Circle to see what was the matter.

Away to the window, tripping over my sash,
My eyes were a-glamoured with a bright silver flash.
The moon on the breasts of the Goddess and God
Drew my eyes to behold the blessed Circle they trod.

When, what to my wondering eyes should appear,
But the manifestations of all those we hold Dear.
The physical forms of those whom we pray to,
Even Saint Nick, and his miniature sleigh, too!

Jehovah, Mohammet, Shiva, Hera and Thor.
Zeus, Freya, Brahma, and many, many more.
All the Spiritual Entities who’d ever been mentioned.
Even some, like dear Loki, who sowed seeds of dissension.

They greeted each other with smile, warm and sweet.
Then, forming a Circle, they all took a seat.
With multiple Voices all joined as One,
The Corners were Called. And, when that was done.

The Chalice was passed from Hand to Hand.
Then, a blanket of silence enfolded the land.
A crystal clear Voice began to hold sway.
Which Deity spoke? I could not say.

But, clearly, I heard all the love in that Voice.
It caused my tired heart to take flight and rejoice.
“Our Children, it seems, have missed the whole point.
“We now join together, their hearts to anoint.

“Pour all of Our love O’er their hearts of stone.
“Let them see that together they’re never alone!
“Show them it matters not which of Us that they choose.
“Their sad hate and mistrust cause each of Us to lose!”

As I stood there transfixed, I could suddenly see
If we all stand as one, what a world this could be!
Put ALL of our differences well behind us.
Let the love of the Gods enfold and remind us.

We ARE all the same,though varied our skins.
We all dream the same dreams, we all sin the same sins.
With a look of enlightenment etched on my face,
I beheld all the Gods in Their glory and grace!

They all bowed Their heads then said”So mote it be!”
They all smiled at each Other bestowing winks on me.
One by One they disappeared from my sight.
Just the Goddess and God were left in the light.

As slowly They twinkled, fading by degree,
“Happy Yuletide to all!!
Blessed be times three!”

Promote Your Page Too
Bread Crumbs
A trail of bread crumbs, just in case you get lost in the widdershins ... Widdershins > Blog Page > Poetry > ‘Twas the night before Yule