Snowflake is a Slavonic story from Andrew Lang’s The Pink Fairy Book, published in 1897. This Russian folktale is closely associated with the Russian Christmas which is traditionally celebrated on Jan 6, and also with St John’s Day celebrated on June 24. 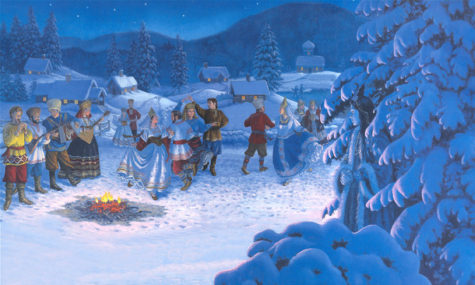 Once upon a time there lived a peasant called Ivan, and he had a wife whose name was Marie. They would have been quite happy except for one thing: they had no children to play with, and as they were now old people they did not find that watching the children of their neighbours at all made up to them for having one of their own.

One winter, which nobody living will ever forget, the snow lay so deep that it came up to the knees of even the tallest man. When it had all fallen, and the sun was shining again, the children ran out into the street to play, and the old man and his wife sat at their window and gazed at them. The children first made a sort of little terrace, and stamped it hard and firm, and then they began to make a snow woman. Ivan and Marie watched them, the while thinking about many things.

Suddenly Ivan’s face brightened, and, looking at his wife, he said, ‘Wife, why shouldn’t we make a snow woman too?’

‘Why not?’ replied Marie, who happened to be in a very good temper; ‘it might amuse us a little. But there is no use making a woman. Let us make a little snow child, and pretend it is a living one.’

‘Yes, let us do that,’ said Ivan, and he took down his cap and went into the garden with his old wife.

Then the two set to work with all their might to make a doll out of the snow. They shaped a little body and two little hands and two little feet. On top of all they placed a ball of snow, out of which the head was to be.

‘What in the world are you doing?’ asked a passer-by.

They had finished the nose and the chin. Two holes were left for the eyes, and Ivan carefully shaped out the mouth. No sooner had he done so than he felt a warm breath upon his cheek. He started back in surprise and looked–and behold! the eyes of the child met his, and its lips, which were as red as raspberries, smiled at him!

‘What is it?’ cried Ivan, crossing himself. ‘Am I mad, or is the thing bewitched?’

The snow-child bent its head as if it had been really alive. It moved its little arms and its little legs in the snow that lay about it just as the living children did theirs.

‘Ah! Ivan, Ivan,’ exclaimed Marie, trembling with joy, ‘heaven has sent us a child at last!’ And she threw herself upon Snowflake (for that was the snow-child’s name) and covered her with kisses. And the loose snow fell away from Snowflake as an egg shell does from an egg, and it was a little girl whom Marie held in her arms.

‘Oh! my darling Snowflake!’ cried the old woman, and led her into the cottage.

And Snowflake grew fast; each hour as well as each day made a difference, and every day she became more and more beautiful. The old couple hardly knew how to contain themselves for joy, and thought of nothing else. The cottage was always full of village children, for they amused Snowflake, and there was nothing in the world they would not have done to amuse her. She was their doll, and they were continually inventing new dresses for her, and teaching her songs or playing with her.

Nobody knew how clever she was! She noticed everything, and could learn a lesson in a moment. Anyone would have taken her for thirteen at least! And, besides all that, she was so good and obedient; and so pretty, too! Her skin was as white as snow, her eyes as blue as forget-me-nots, and her hair was long and golden. Only her cheeks had no colour in them, but were as fair as her forehead.

So the winter went on, till at last the spring sun mounted higher in the heavens and began to warm the earth. The grass grew green in the fields, and high in the air the larks were heard singing. The village girls met and danced in a ring, singing, ‘Beautiful spring, how came you here? How came you here? Did you come on a plough, or was it a harrow?’ Only Snowflake sat quite still by the window of the cottage. END_OF_DOCUMENT_TOKEN_TO_BE_REPLACED

Promote Your Page Too
Bread Crumbs
A trail of bread crumbs, just in case you get lost in the widdershins ... Widdershins > Blog Page > Snegurka