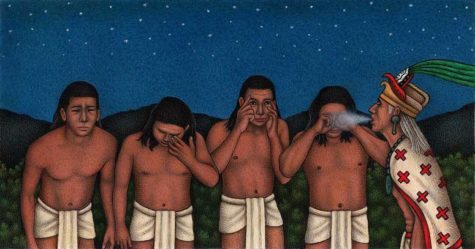 The first four humans, the first four earthly beings who were truly articulate when they moved their feet and hands, their faces and mouths, and who could speak the very language of the gods, could also see everything under the sky and on the earth. All they had to do was look around from the spot where they were, all the way to the limits of space and the limits of time.

But then the gods, who had not intended to make and model beings with the potential of becoming their own equals, blew mist into their eyes, and limited human sight to what was obvious and nearby. Nevertheless, the lords who once ruled a kingdom from a place called Quiche, in the highlands of Guatemala, once had in their possession the means for overcoming this nearsightedness, an ilbal, a “seeing instrument” or a “place to see”; with this they could know distant or future events. The instrument was not a telescope, not a crystal for gazing, but a book. 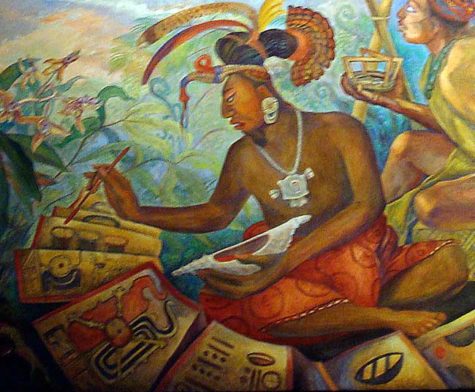 The lords of Quiche consulted their book when they sat in council, and their name for it was Popol Vuh or “Council Book.” Because this book contained an account of how the forefathers of their own lordly lineages had exiled themselves from a faraway city called Tulan, they sometimes described it as “the writings about Tulan.”

Because a later generation of lords had obtained the book by going on a pilgrimage that took them across water on a causeway, they titled it “The Light That Came from Across the Sea.” And because the book told of events that happened before the first sunrise and of a time when the forefathers hid themselves and the stones that contained the spirit familiars of their gods in forests, they also titled it “Our Place in the Shadows.”

And finally, because it told of the first rising of the morning star and the sun and moon, and of the rise and radiant splendor of the Quiche lords, they titled it “The Dawn of Life.” 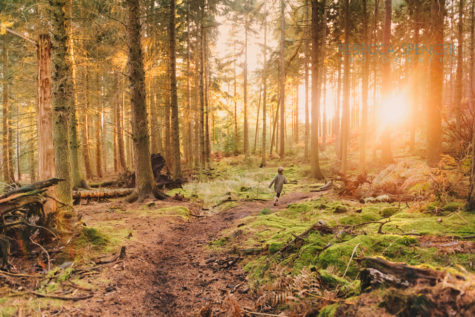 The little boy stumbled through the forest. He was sure that wild animals were chasing him, and wanted to eat him. As he crashed through the undergrowth he suddenly emerged into a clearing. He looked around, fearing that he could hear animals, but all was quiet.

The little boy walked further into the clearing. He saw a small stool with a book on it.

He stopped, and looked around wondering who had left the stool, and the book there.

He walked over to the stool, and picked up the book to look at it. Without thinking, he sat down, and opened the book. He started to read aloud. The only sound in the clearing was the little boy’s voice.

He had forgotten about his earlier fear, and he had also stopped imagining that he could hear animals after him.
Once he had finished reading the story he put the book down, and he said to the clearing, “I’ll come back tomorrow to read again.”

The little boy left the clearing and reentered the forest. He wasn’t afraid anymore. It was if he had a new found confidence, and manner.

The next day he returned, and found a different book on the stool, and as before, he sat down, and started to read.

This went on for a week. After seven days animals started to come through the undergrowth, and entered the clearing. When they saw the boy, and heard his storytelling they would stop, find a place to sit down, and listen to him.

One day he heard a roar behind him, and the little boy turned around, coming face to face with a tiger. “Shhh!” he told the tiger, and gave it a smack across the nose.

The tiger was taken aback, but he did as he was told and he went to a tree. Then he too, sat and listened to the little boy.

This went on for many years, and some animals died never to return, while others grew old as the little boy did. One day, when the little boy was no more but a little old man he died as he was reading one of his stories.

The animals looked up, and listened to the silence.

The tiger, who many years ago the little boy had smacked across the nose, carried the little boy, and laid him to rest under his tree.

The animals lined up to pay their respects to the little boy who had devoted his life to reading to the animals.

As they lined up they were watched by God, Buddha, Allah and Ganesha, standing off to the side, who had tears in their eyes, not because the little boy that had died, who now stood next to them, but because as each animal came to the body of the little boy, each animal would lay their head down on his chest, and shed tears over the boy’s body.

When the animals had left, there was an eerie silence over the clearing.

Many, many years passed until one day, a small girl come running through the bushes, with a frightened look on her face. She stopped, and looked around the clearing. She saw a small stool, and so she walked over to it, wondering who would leave such a thing here in the forest.

She sat down on the stool and looked down. She saw a box full of books.

Promote Your Page Too
Bread Crumbs
A trail of bread crumbs, just in case you get lost in the widdershins ... Widdershins > Blog Page > Books