Chang E Flying to the Moon 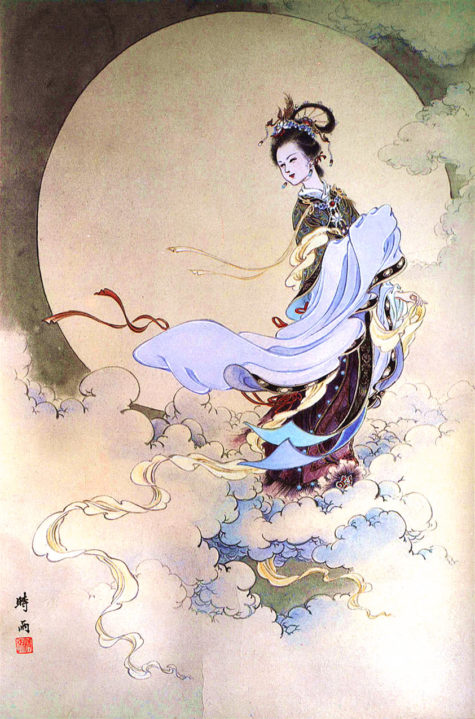 The story of Chang E is the most widely accepted tale regarding the moon and the origin of the Mid-Autumn Festival. It is said that in ancient times, ten suns existed and the extreme heat made people’s lives very difficult. It was the hero Hou Yi, who, owing to his great strength, shot down nine of the ten suns. On hearing of this amazing feat and the hero who performed it, people came from far and wide to learn from him. Peng Meng was among these people. Later, Hou Yi married a beautiful and kind-hearted woman named Chang E and lived a happy life.

One day, Hou Yi came upon Wangmu (the queen of heaven) on the way to meet his old friend. Wangmu presented him an elixir which, if took, would cause him to ascend immediately to heaven and become a god/goddess. Instead of drinking the potion himself, Hou Yi took it home and presented it to Chang E to keep. Unfortunately, Peng Meng secretly saw Hou Yi give the potion to his wife and three days later, while Hou Yi was out hunting, Peng Meng rushed into the backyard and demanded that Chang E hand over the elixir. Knowing that she could not win, she took out the elixir and swallowed it immediately. The moment she drank it, she flew out of the window and up into the sky. Chang E’s great love for her husband drew her towards the Moon, which is the nearest place to the earth on the heaven.

On realizing what happened to his wife, Hou Yi was so grieved that he shouted Chang E’s name to the sky. He was amazed to see a figure which looked just like his wife appeared in the Moon. He took the food liked by Chang E to an altar and offered it as a sacrifice for her. After hearing that Chang E became a goddess, folk people also offered sacrifices to Chang E to pray for peace and good luck. Since then, the custom of sacrificing to the moon has been spread among the folklore.

Promote Your Page Too
Bread Crumbs
A trail of bread crumbs, just in case you get lost in the widdershins ... Widdershins > Blog Page > Myths and Legends > Chang E Flying to the Moon