Baba Yaga and the Little Girl

Baba Yaga lived deep in the forest and scared passersby to death just by appearing to them. She then devoured Her victims, which is why Her picket fence was topped with skulls. Children’s stories about Baba Yaga tend to be quite similar. Here is a story about a little girl, her wicked stepmother, and Baba Yaga. 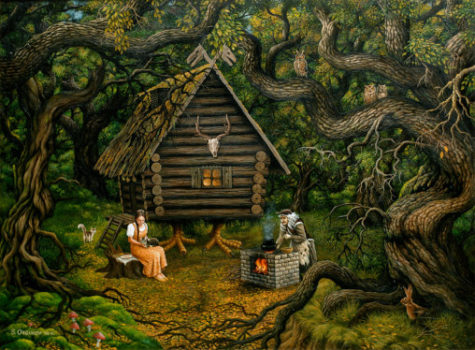 Once upon a time there was a man and woman who had an only daughter. When his wife died, the man took another. But the wicked stepmother took a dislike to the girl, beat her hard and wondered how to be rid of her forever. One day the father went off somewhere and the stepmother said to the girl, “Go to your aunt, to my sister, and ask her for a needle and thread to sew you a blouse.” The aunt was really Baba Yaga, the bony witch.

Now, the little girl was not stupid and she first went to her own aunt for advice. “Good morrow. Auntie,” she said. “Mother has sent me to her sister for a needle and thread to sew me a blouse. What should I do?”

The little girl went off, walked and walked and finally came to the witch’s abode.

There stood a hut, and inside sat Baba Yaga, the bony witch, spinning. “Good day. Auntie,” said the little girl.

“Mother sent me for a needle and thread to sew me a blouse,” said the girl.

The girl sat at the loom. then Baba Yaga went out and told her serving-maid, “Go and heat up the bath-house and give my niece a good wash; I want to eat her for breakfast.”

The serving-maid did as she was bid; and the poor little girl sat there half dead with fright, begging, “Oh, please, dear serving-maid, don’t bum the wood, pour water on instead, and carry the water in a sieve.” And she gave the maid a kerchief.

When Baba Yaga moved away from the window, the little girl gave some ham to the cat and asked her whether there was any escape. At once the cat replied, “Here is a comb and towel. Take them and run away. Baba Yaga will chase you; put your ear to the ground and, when you hear her coming, throw down the towel?and a wide, wide river will appear. And if she crosses the river and starts to catch you up, put your ear to the ground again and, when you hear her coming close, throw down your comb and a dense forest will appear. She won’t be able to get through that.”

The witch rushed into the hut and saw that the girl was gone. She gave the cat a good beating and scolded her for not scratching out the girl’s eyes. But the cat answered her, “I’ve served you for years, yet you’ve never even given me a bone, but she gave me some ham.”

Baba Yaga then turned on the dogs, the gates, the birch-tree and the serving-maid, and set to thrashing and scolding them all. But the dogs said to her, “We’ve served you for years, yet you’ve never even thrown us a burnt crust, but she gave us fresh rolls.”

And the gates said, “We’ve served you for years, yet you’ve never even poured water on our hinges, but she oiled them for us.”

Promote Your Page Too
Bread Crumbs
A trail of bread crumbs, just in case you get lost in the widdershins ... Widdershins > Blog Page > Fairy Tales and Stories > Baba Yaga and the Little Girl