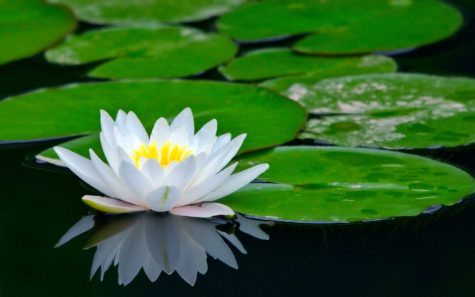 The lotus is arguably one of the most important flower symbols on the planet, along with the lily and the rose. Both the otherworldly appearance of the flower and its growing circumstances make it obvious that the flower is very special. It’s therefore no surprise that the flower is one of the eight auspicious symbols in both Chinese and Tibetan Buddhist iconography.

This sensuous and extraordinary flower, with its perfect petals, rises imperiously from muddy swamps, its head above the dirty water. The symbolism applied by generations of Egyptian, Indian, and Chinese sages is obvious. First, the flower rises in complete perfection from the murky primal waters of creation. Next, the flower comes from the darkness into the light, woken by the Sun. Third, the lotus symbolizes the triumph of spirit over matter and is a metaphor for the journey to enlightenment.

Ancient Egyptians used the plant extensively as a symbol in the paintings and carvings left on the walls of temples and tombs. 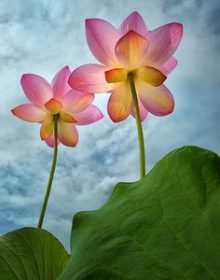 Because the lotus appears to retreat back into the water during the hours of darkness only to rise again above the surface of the water at dawn, the Egyptians saw it as a symbol of death and rebirth.  It is now known the plant simply loses old blooms and adds new ones on a daily cycle, but it is still a potent reminder of reincarnation and the mysteries of the afterlife.

Priests and other religious leaders also brewed the flowers to make a tea with sedative and mild psychotropic effects, which heightened their sense for ritual work.

In all cultures the lotus carries within it a reminder of the elements. It has its seed within the earth; it grows in water; the blossom exists in air which also carries its fragrance; and the flower itself is awoken by the Sun, and therefore the element of fire which it also resembles, the curious central circle surrounded by the rays of petals.

Buddhist studies use the lotus flower in guided meditations. The meditation instructs practitioners to imagine themselves as a tiny lotus seed that is deeply buried in the mud. While the mud is dirty and uncomfortable, the seed’s journey is to move calmly through the darkness and into the light. Once the seed completes the journey, it blossoms into the next stage of life. The lotus symbolizes growth and determination.

These deep spiritual meanings gave rise to a way of sitting known as the Lotus position. The legs are crossed and tucked in a way that makes the bent knees look like the petals of a lotus. It is an important position in both Buddhist meditation and Hindu yoga practices. The soles of the feet are tucked away, which makes it a respectful position to sit in when visiting a temple where exposing the bottom of your feet is considered rude. 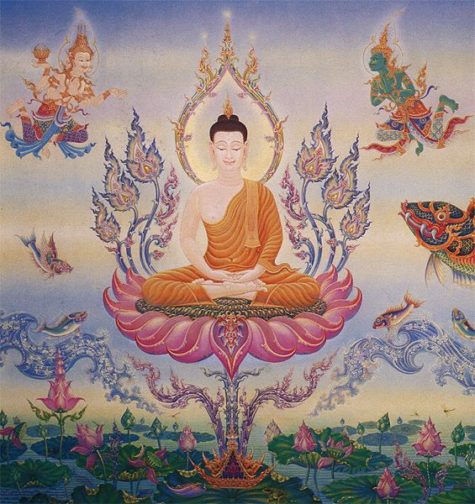 The lotus is also commonly depicted in mandalas, which are spiritual and artistic representations of divine energies and meditation aids in Buddhist traditions. The symbol of the lotus is often partially hidden in the traditional mandala, the petals forming a border that is both symbolic and decorative. The Buddha sits in the center of the eight-petaled lotus, detached from the material world with its cycle of death and rebirth.

In Hindu iconography, the lotus is seen as the base of the earth from which the holy mountains (such as Kailash and Meru) rise. The stalk of the flower is associated with the world axis which rises up through this sacred mountain.

The lotus is used as a symbol for each of the chakras, the number of petals relating to the role and function of each of these energy centers that are situated along the spine and that are said to unfurl like petals with exercise and meditation. 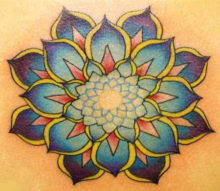 The lotus flower is a popular design for tattoos and art, as it is a daily reminder that perseverance and inner strength results in light and beauty. Getting a Lotus flower tattoo is a beautiful way to show your dedication to a Hindu or Buddhist faith. It is also a reminder to stay humble and focus on developing inner peace.

You can also develop more balance in your life with a tattoo of this flower because the eight petals represent all eight parts of a spiritual path. A lotus sends a message of gracefulness and love to everyone that sees it.

The colors of the lotus are also significant.

The sacred lotus is pink or white, and is a large flower whose petals can reach up to half a meter in diameter. Also known as the Indian or Oriental Lotus, every part of this plant is edible, and the sugared seeds are a treat during various festivals.

The red lotus is the ultimate symbol of the Sun and is the emblem of India.

The lotus depicted in stylized form in Egyptian friezes is the blue lotus, actually a form of water lily rather than a true lotus. As well as its ethereal color, this lotus contains a psychotropic substance called apomorphine, which no doubt contributes to its status as a sacred flower. The lotus eaters of Greek mythology, immortalized in Tennyson’s poem, “Song of the Lotus Eaters,” lived in a state of hedonistic bliss brought about by eating the seeds of this blue flower.

The white lotus flower and pink lotus flower from the Nelumbo family are seen as meaning purity and devotion. More passionately colored red, purple, and blue Lotus flower blooms can take on a spiritual meaning of ascension, enlightenment, or rebirth. A green Lotus flower is a beautiful gift for anyone trying to improve their life and start good habits. 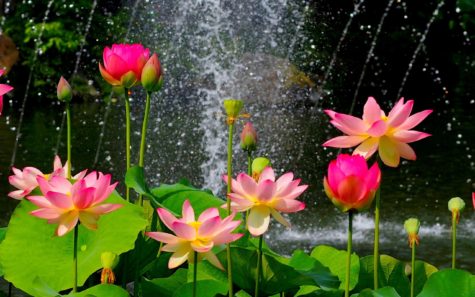 According to the Language of Flowers, sometimes called florigraphy, a Victorian-era means of communication in which flowers and floral arrangements were used to send coded messages, allowing individuals to express feelings which otherwise could not be spoken, lotus flowers have the following meanings:

Promote Your Page Too
Breadcrumbs
A trail of breadcrumbs in case you lose your way... Sigils Symbols and Signs > Newest Symbols > Flower Symbolism > Lotus