The Eye As A Symbol 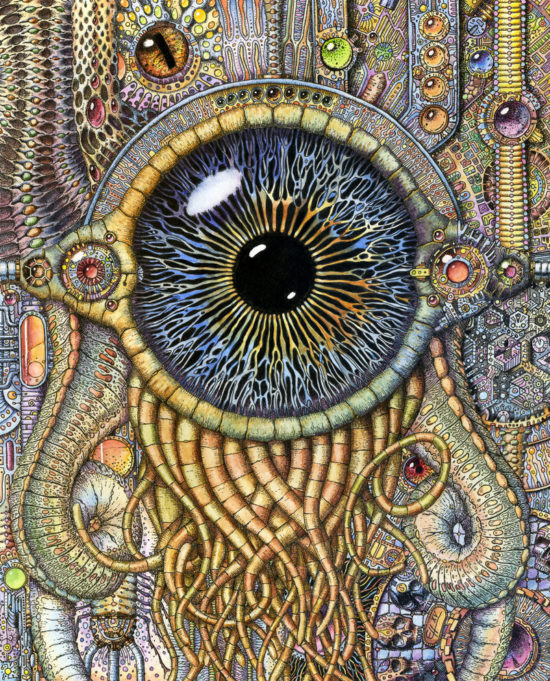 The symbolism of the eye occurs in so many places and in so many different forms that its pervasiveness symbolizes the “All Seeing Eye” itself.

The eye is closely associated with the idea of light and of the spirit, and is often called the “mirror of the soul.” When a person dies one of the first things that is done is that the eyes are closed, a timeless gesture that signifies the departure of the essence of life.

Generally, the right eye is considered to be the eye of the sun, the left, that of the moon.

The eye represents the “god within,” for example as the “third eye” whose position is designated by the small dot called the bindhu above and between the actual eyes. The Buddha is always depicted with this third eye. Here, the eye signifies the higher self, the part of man’s consciousness that is ego-free and can guide and direct him. whereas the eyes are organs of outward vision, this “eye of wisdom” directs its view internally as the “eye of dharma” or the “eye of the heart.”

As an occult symbol, the unlidded eye has its origins as the symbol of the Egyptian Goddess of Truth, Maat, whose name was synonymous with the verb “to see”; therefore the concepts of truth and vision were closely aligned.

The same eye symbol appears as the “Eye of Horus,” or Udjat. This stylized eye, with a brow above and featuring a curlicue underneath, represents the omnipresent vision of the Sun God Horus, and is a prominent symbol within the Western magical tradition where it represents, among other things, secret or occult wisdom. This eye was painted on the sides of Egyptian funerary caskets in the hope that it would enable the corpse to see its way through the journey to the Afterlife.

In Celtic magical lore, too, the eye equated with the Sun, and the planet and the eye shared the same name, Sul.

The All Seeing Eye, the eye within a triangle with rays emanating from the lower lid, is used not only in Freemasonry (where it stands for the “Great Architect of the Universe,” for external vision, and also for inner vision and spiritual watchfulness) but in Christian symbolism too.

The eye symbol is used as a charm, painted on the sides of humble fishing boats, in order to protect the boat from the evil eye and to somehow confer this inanimate object with the power of sight of its own, a notion which follows exactly the same reasoning behind the practice of the Egyptians painting eyes on the coffins of their dead.

Belief in the evil eye is ancient, referred to in Babylonian texts dating back to 3.000 years before Christ. This is the idea that some people can curse an object (or a person) simply by the act of looking, as though the eye itself can direct a malevolent thought. It is a mark of the profound belief in the concept of the evil eye that there are so very many charms said to protect against it.

From: Element Encyclopedia of Signs and Symbols