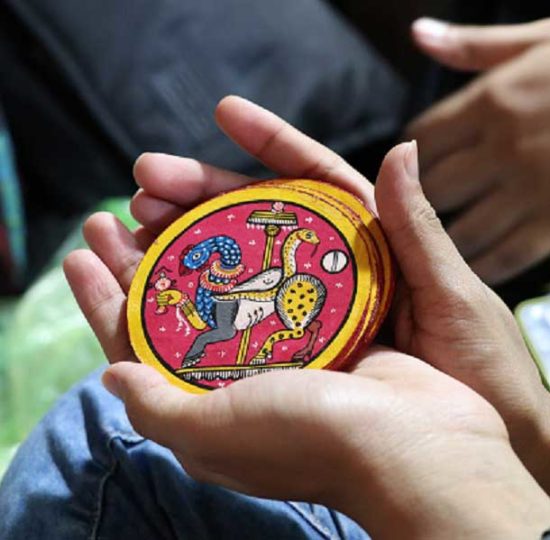 In the 16th Century in Orissa, circular cards with exquisite paintings on them – an art called Ganjapa were very popular among the people of Ganjam; they were used to play ordinary card games. Ganjapa, also called “Ganjapa” is derived from a Persian word “Gajife.“ The earliest mention of Ganjapa is in 1527 A.D. in the memoirs of Emperor Babur. 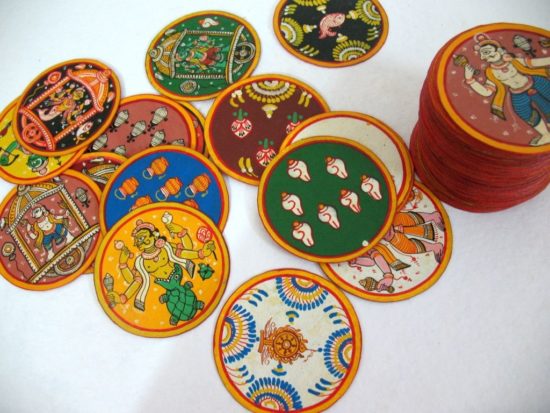 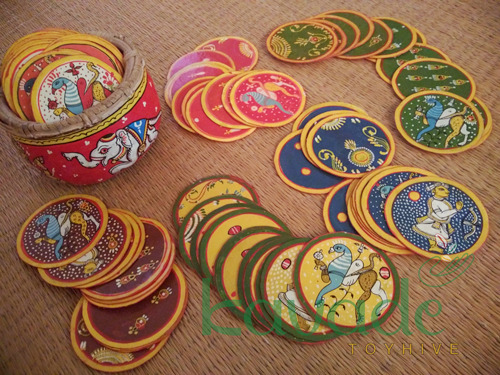 Based on the number of colors in a set, the packs are called atharangi (eight colors), dasarangi (10 colors), bararangi (12 colors), chaudarangi (14 colors) and sholarangi (16 colors). A maximum of 24 colors are used. Of these, the atharangi is the most common.

The themes used vary from common decorations to figurative representations of the Ramayana, the 10 incarnations of Vishnu, and gods and goddesses of Hindu mythology. They vary from region to region and are in Odissi style. 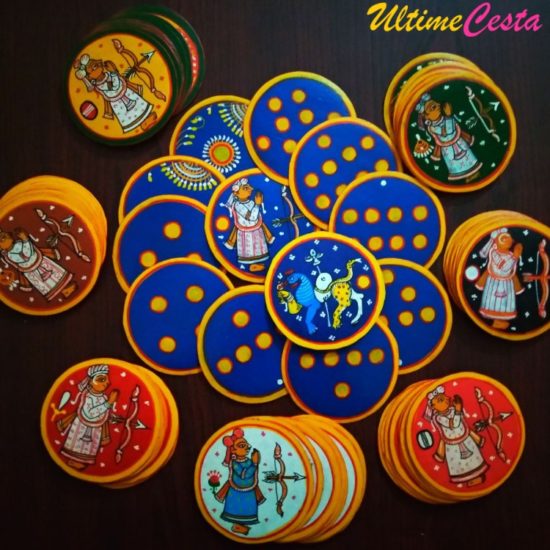 There are eight suits in a pack of cards, each one recognizable by a distinct background color. Each suit has 10 numbered cards and a king and vizier. The king is the highest in value with the vizier coming next, followed by the series in descending order. The king is distinguished as either sitting, or with legs folded at the knees, while the vizier is depicted standing.

Sometimes, the king is on a chariot and the minister mounted on a horse. In some other sets, the king is recognized by his two heads, while the minister is shown with one head. Somewhere on the card is another head of an animal. Eka, Douka, Teeka, Chouka, Pancha, Chhaka or Atha are the numbers of the cards. The horse, rat, Ganesha, Kartika, lotus or fish are the figures generally used.

Exotic Ganjapa cards were popular while luxury cards engraved on plates of wood were exclusive. 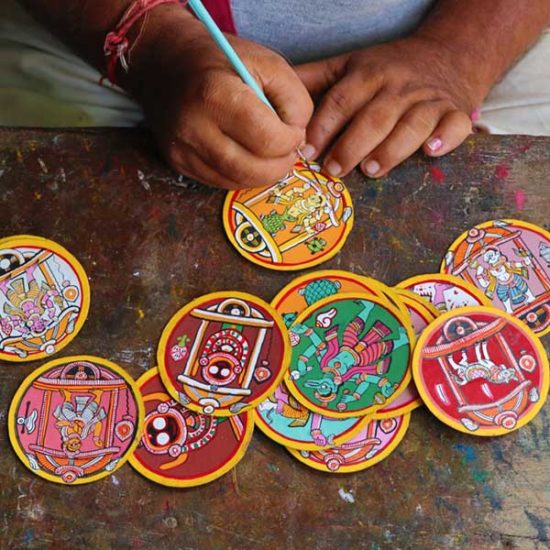 Making a Ganjapa card is an art that resembles pata chitra. A piece of cloth is dipped several times in a glue made of tamarind seeds and then dried to make it crisp. Circles are cut out of the cloth with a hollow iron cylinder. Two such circles of cloth, or a circle each of cloth and paper are pasted together. Finally a paste of chalk powder is applied. After this has dried, paints made from lac dye are used to make a base for painting. Cards are hand-printed. 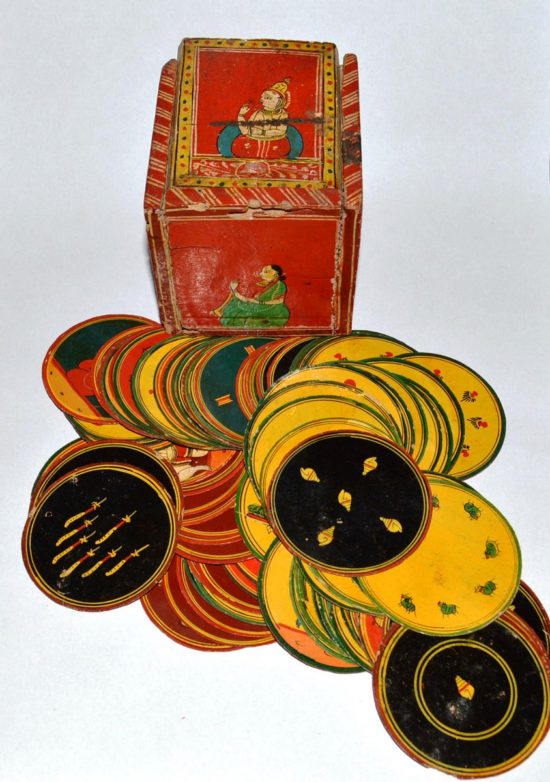 The cards are mainly done by the women folk of artisan families. They prepare the cloth sheets, tamarind glue and traditional color and lacquer paste at home. Male artists traditionally paint figures on the cards. 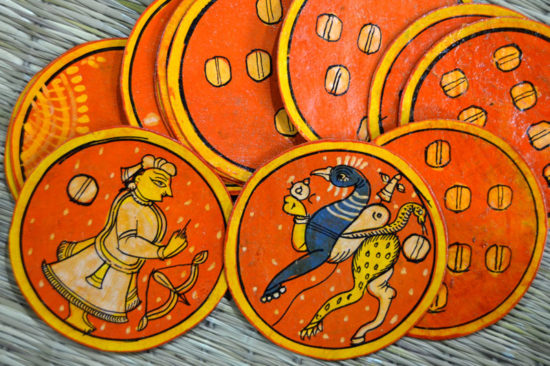 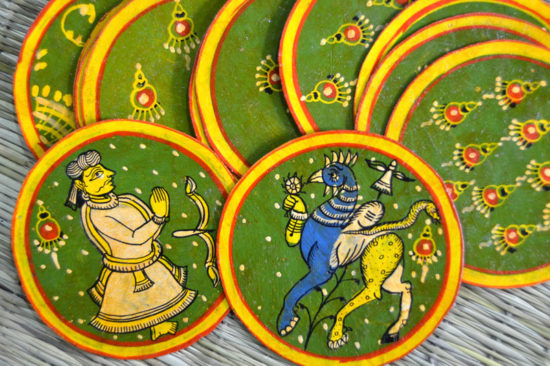 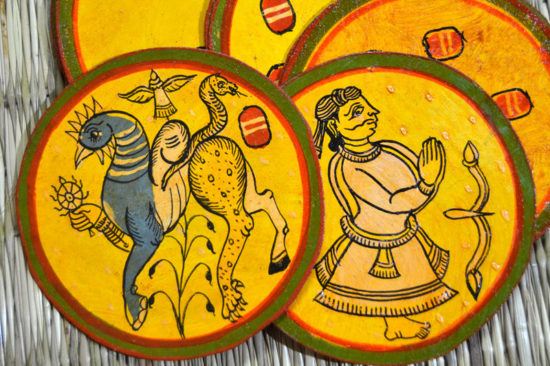 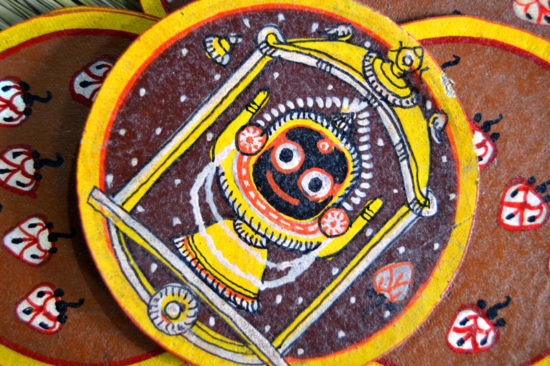 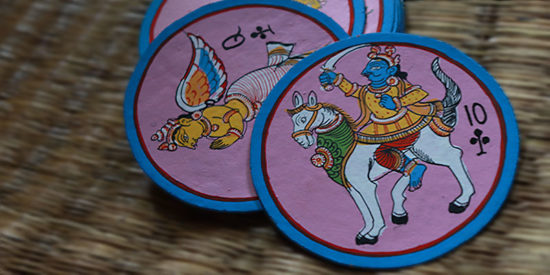