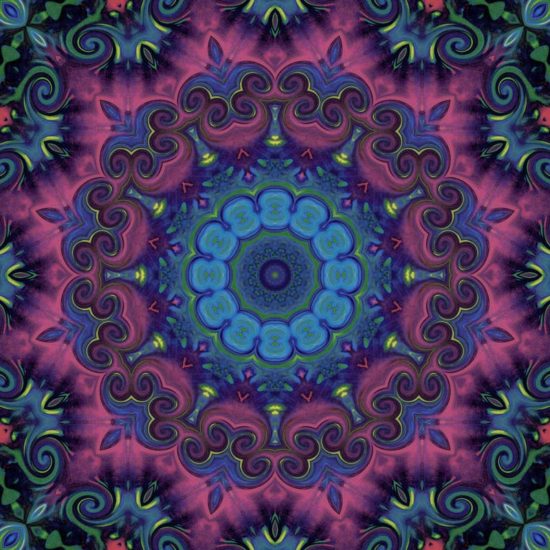 We humans have always had a fascination with the circle. We experience it throughout nature– in the spiral of the Milky Way, the orbiting planets, and the cycles of life itself. As children, we also discover that we can use a crayon to make circular forms on paper; it’s a universal stage of artistic development that every normal child throughout the world experiences. In fact, it is the first major milestone in image-making and for that reason, a child’s circle drawing may be one the earliest representations of the self.

Circular forms in art are often referred to as mandalas, the Sanskrit word for “sacred circle.” For thousands of years the creation of circular, often geometric designs has been part of spiritual practices around the world and almost every culture has revered the power of the circle.

Eastern cultures have used specific mandalas for visual meditation for many centuries; the Tibetan Buddhist Kalachakra, also known as the Wheel of Time, is probably one of the most famous mandalas and symbolically illustrates the entire structure of the universe. Circular forms are found at the prehistoric Stonehenge monument in England and the 13th century labyrinth at the base of Chartres Cathedral in France.

Spiritual seekers have consistently created mandalas to bring forth the sacred through images and have evoked the circle in ritual and art making for the purpose of transcendence, mindfulness, and wellness.