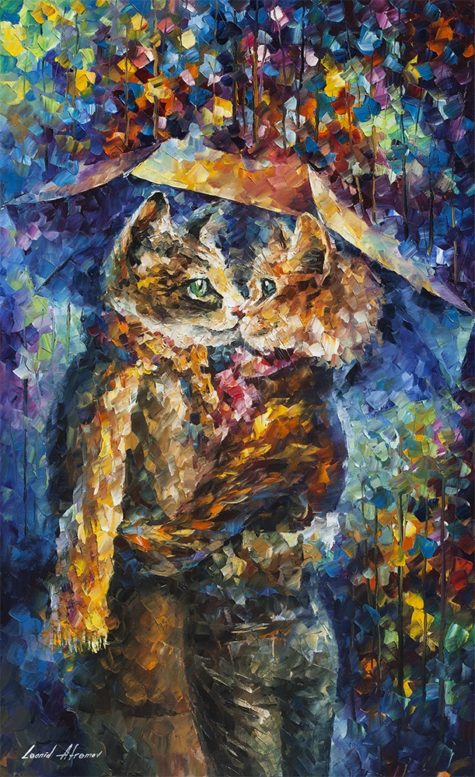 Once upon a time there lived a fantastically beautiful golden cat whose fur was as soft and shining as silk, and whose wise green eyes shone like emeralds. This cat’s name was Gon, and he belonged to a music master, who was so fond and proud of his golden cat that he would not part with him for anything in the world.

Not far from the music master’s house lived a lady who owned a charming little tortoiseshell pussy cat called Koma. Koma blinked her eyes so daintily, ate her supper so tidily and licked her pink nose so delicately with her little pink tongue, that her mistress sighed “Koma, Koma, whatever should I do without you?”

One day, both Gon and Koma went out for an evening stroll in the cherry blossom. By chance, they met under a cherry tree and immediately fell madly in love with each other. Golden Gon had wanted to find a wife, and though the other ladies in the neighborhood paid him a great deal of attention, none of them appealed to him.

But suddenly he found himself madly in love with the dainty tortoiseshell Koma and, to his joy, she was madly in love with him. However, both could see difficulties in their way since neither owner wished to part with their cat and neither cat wished to be parted from the other. Gon begged his master to set matters right by buying Koma, but her mistress would not part with the dainty little cat. Neither would the music master sell Gon to Koma’s owner.

With their owners unable to resolve matters, the two cats decided to please themselves and seek their fortunes together. One moonlit night they crept out of their homes and ventured out into an unknown world. All that night and into the next day they marched resolutely on until they were far from home and certain that no-one would find them or part them from each other.

Towards evening they found themselves in a large tree-filled park full of cool inviting shadows and soft grass. By this time, they were both hot and tired and longed to rest. Unknown to the cats, the park belonged to the princess. Just as they were looking for somewhere to rest, a huge, vicious guard dog sprang towards them, snarling and gnashing its teeth. Poor Koma shrieked in terror and rushed straight up a cherry tree while brave Gon stood his ground, ready to protect his beloved.

Alas, the dog was far bigger and fiercer than Gon, and all of Gon’s courage was not equal to the dog’s teeth. From her perch in the tree, Koma saw everything and she screamed with all her might, hoping that some one would hear her and come to rescue them. Luckily one of the princess’s servants heard the commotion and he drove off the dog. The servant carried poor injured Gon back to his mistress, leaving Koma quite alone in her tree.

The princess herself nursed Gon and he took many days to recover from the guard dog’s attack. The heartbroken Koma had not dared come down from the tree to follow the servant and she did not know where to find Gon. Sadly she went her own lonely way in the world, finding food and shelter where she could and always hoping that Gon would return to find her.

Although Gon recovered from the attack, even the attention paid to him by the princess could not console him. The kindly princess was delighted with his beauty and pretty ways and was kind to him, but he was heartsick for Koma and did not know how to find her.

The kind princess would have led a happy life, had it not been for a serpent who had fallen in love with her. The serpent constantly crept up on her and though her servants drove it away as often as they could, but it wasn’t hard for the wily serpent to slip inside the palace. Although the serpent loved the princess, the princess was terrified of it.

One day, as she sat playing musical instruments in her room, the princess felt something slither across her leg. She saw her enemy making his way to kiss her cheek and she shrieked, throwing herself backwards away from the snake. Brave Gon, now fully recovered and curled up on a stool at the princess’s feet, immediately sprang on the serpent and killed it with a single fierce bite.

No longer threatened by the serpent, the princess praised and caressed heroic Gon, carrying him in her arms and giving him the best food to eat and the softest beds to sleep on. Still Gon was not happy as his beloved Koma was missing from his life and he did not know how to find her or how she fared without him. As time passed, Gon grew into a large and stately cat.

Time passed on and one morning Gon lay before the house door, basking in the sun. He looked lazily at the world stretched out before him, and saw in the distance a big tabby ruffian of a cat teasing and ill-treating a much smaller tortoiseshell cat. Gon jumped up angrily and chased away the big cat. When he turned to comfort the little one his heart nearly burst with joy to find that it was Koma. At first Koma did not recognise him, but as soon as she did, her happiness knew no bounds. They rubbed their heads and their noses together again and again, while their purring could be heard a mile off.

Paw in paw, and tails intertwined, Gon and Koma appeared before the princess and told her the story of their life and how they had been parted when the guard dog had attacked Gon. The princess wept in sympathy and promised that they should never more be parted, but should live with her to the end of their days. By and by, the princess got married and her husband came to live in the palace in the park. She told the prince how brave Gon had saved her from the serpent and the prince swore that the two cats should never leave them, but should go with the princess wherever she went.

So at last Gon and Koma were together. They had many children, as did the prince and princess, and they all played together, and remained firm friends to the end of their lives. But what of the previous owners of Gon and Koma you might ask? Well, ask you might, but that is a different story.

Related Posts
The Boy Who Drew Cats
The Four Eyed Cat
The Kitten and the Hungry Fox
The Colony of Cats
Popular Posts
Search
Cat.egories