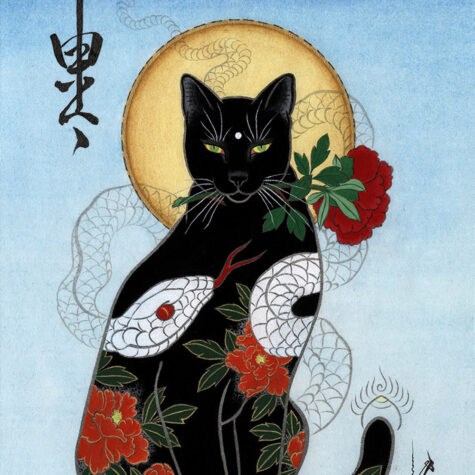 Cats have been favorites in Japan for a really long time. On March 11, 889 CE, 17-year-old Emperor Uda wrote:

“On the 6th Day of the 2nd Month of the First Year of the Kampo era. Taking a moment of my free time, I wish to express my joy of the cat. It arrived by boat as a gift to the late Emperor, received from the hands of Minamoto no Kuwashi.

“The color of the fur is peerless. None could find the words to describe it, although one said it was reminiscent of the deepest ink. It has an air about it, similar to Kanno. Its length is 5 sun, and its height is 6 sun. I affixed a bow about its neck, but it did not remain for long.

“In rebellion, it narrows its eyes and extends its needles. It shows its back.

“When it lies down, it curls in a circle like a coin. You cannot see its feet. It’s as if it were circular Bi disk. When it stands, its cry expresses profound loneliness, like a black dragon floating above the clouds.

“By nature, it likes to stalk birds. It lowers its head and works its tail. It can extend its spine to raise its height by at least 2 sun. Its color allows it to disappear at night. I am convinced it is superior to all other cats.”

The Boy Who Drew Cats 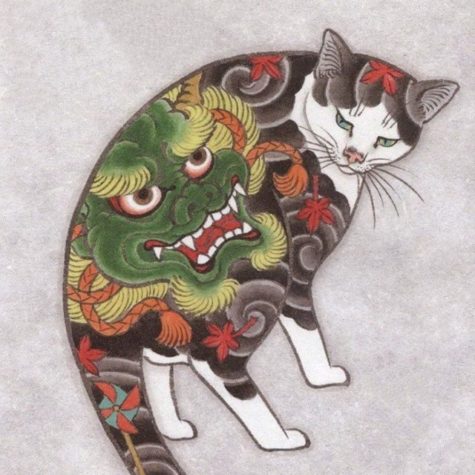 A long time ago, in a small country village in Japan, there lived a poor farmer and his wife. They were good people with a number of children, although it was often hard to feed them all. At fourteen years old, the older son was strong enough to help his father around the farm while the little girls helped their mother almost as soon as they could walk. However, the youngest child, a little boy, was not fit enough for hard work. He was cleverer than his brothers and sisters, but was small and weak and could never grow very big so his parents thought it would be better for him to become a priest than to become a farmer.

They took him to the village temple and asked the good old priest who lived there if he would have their little boy for his acolyte. The old man spoke kindly to the lad and asked him some hard questions. So clever were the answers that the priest agreed to take the little fellow into the temple as an acolyte and to educate him for the priesthood.

The young boy learned quickly what the old priest taught him and was very obedient in most things. However, he had one fault – he liked to draw cats during study-hours and to draw cats when cats ought not to have been drawn at all. Whenever he found himself alone, he drew cats. He drew them on the margins of the priest’s books, and on all the screens of the temple, on the walls, and on the pillars.

Several times the priest told him this was not right, but still he did not stop drawing cats. He drew them because he could not really help it. He had what is called “the genius of an artist,” and just for that reason he was not quite fit to be an acolyte. The priest reminded him that a good acolyte should study books, not drawn cats.

One day after he had drawn some excellent pictures of cats on a paper screen, his teacher spoke to him severely. “My boy, you must go away from this temple at once. You will never make a good priest, but perhaps you will become a great artist. Now let me give you a last piece of advice, and be sure you never forget it: avoid large places at night – keep to small.”

The boy did not know what the priest meant by “Avoid large places – keep to small.” He thought a great deal about this advice while he was tying up his little bundle of clothes to go away, but he could not make sense of it and was afraid to speak to the priest, except to say goodbye. He left the temple very sorrowfully and wondered what he should do. He was afraid to go straight home as he was certain his father would punish him for his disobedience to the priest. Then he remembered that the next village, twelve miles away, had a very big temple where there were several priests. He decided to go there and ask them to accept him as an acolyte.

What he did not know was that the big temple now stood empty because a goblin had frightened the priests away and had taken possession of the place. Some brave warriors had gone to the temple one night to kill the goblin, but none had been seen alive again. Not knowing any of this, the boy walked all the way to the village hoping the priests would treat him kindly.

When he arrived it was already dark and all the villagers were in bed, but he saw the temple on the hill at the far end of the main street and he saw also that there was a light in the temple. He was not to know that the goblin made that light to tempt lonely travelers to ask for shelter at the temple. He set off at once to the temple and knocked on the door-post. There was no sound inside. He knocked again and again, but still nobody came so at last he pushed gently at the door and was glad to find that it had not been fastened. He went in and saw a lamp burning, but there was no priest in attendance.

He thought that some priest would be sure to come very soon so he sat down and waited. Then he noticed that everything in the temple was grey with dust and covered with cobwebs. He thought to himself that the priests would certainly like to have an acolyte to keep the place clean and wondered why they had allowed the temple to get so dusty. What most pleased him, however, were some big white screens, good to paint cats upon. Though he was tired, he looked at once for a writing-box, and finding a writing box, he ground some ink and began to paint cats.

He painted a great many cats upon the screens before becoming very sleepy. Still no priest had appeared and he was just on the point of lying down to sleep beside one of the screens when he suddenly remembered his former teacher’s words: “Avoid large places – keep to small.” The temple was very large and he was alone. Though he did not quite understand the advice, he began to feel afraid and looked for a small place in which to sleep. He found a little cabinet, with a sliding door, and went into it and shut himself up. Then he lay down and fell fast asleep.

Very late in the night he was awakened by the most terrible noises of fighting and screaming. It was so dreadful that he was afraid even to look through a chink of the little cabinet and lay very still, holding his breath for fright. The light that had been in the temple went out, but the awful sounds continued and became more awful, and all the temple shook.

After a long time silence came, but the boy was still too afraid to move. He did not move until the light of the morning sun shone into the cabinet through the chinks of the little door and he cautiously got out of his hiding-place and looked about.

The first thing he saw was that all the floor of the temple was covered with blood. The next thing he saw, lying dead in the middle of it, was an enormous monstrous rat – a goblin-rat – bigger than a cow! But who or what could have killed it? There was no man or other creature to be seen. Suddenly the boy observed that the mouths of all the cats he had drawn the night before were red and wet with blood. Then he knew that the goblin had been killed by the cats which he had drawn. And then also, for the first time, he understood why the wise old priest had told him “Avoid large places at night – keep to small.”

Afterwards, the boy went on to become a very famous artist. To this very day, some of the cats that he drew are shown to travelers in Japan. 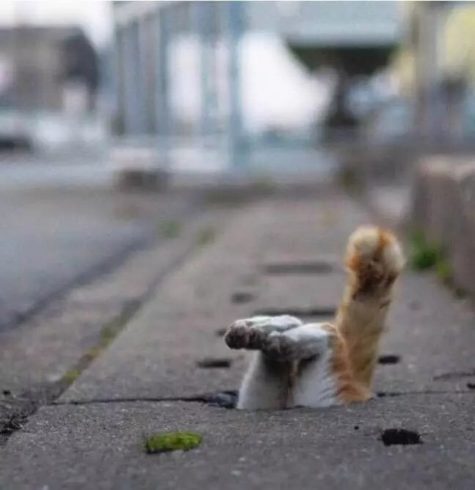 In a certain city in Japan, stray cats live, hunt and play in and around the drain holes along the sides of the street. 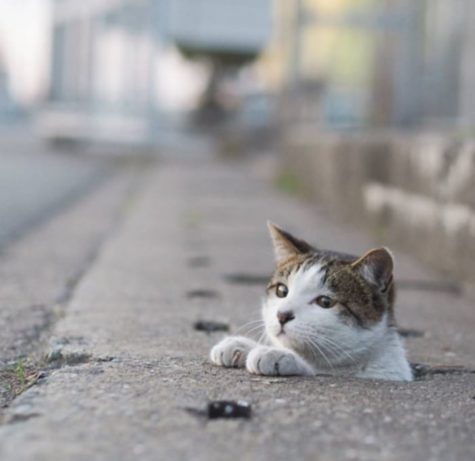 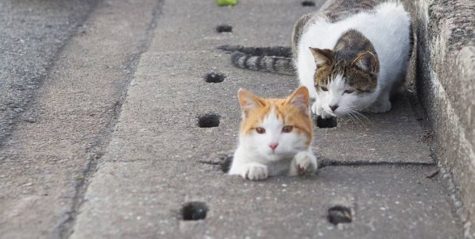 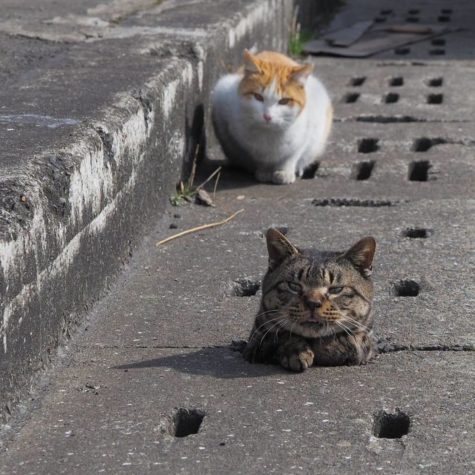 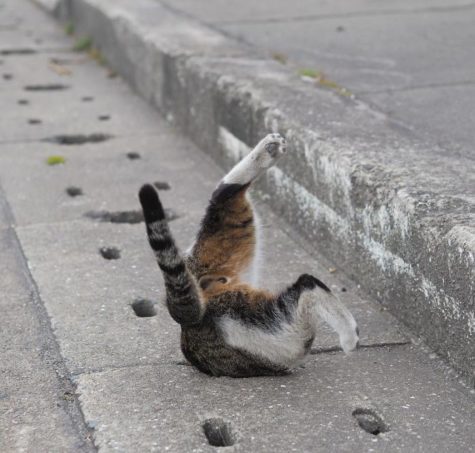 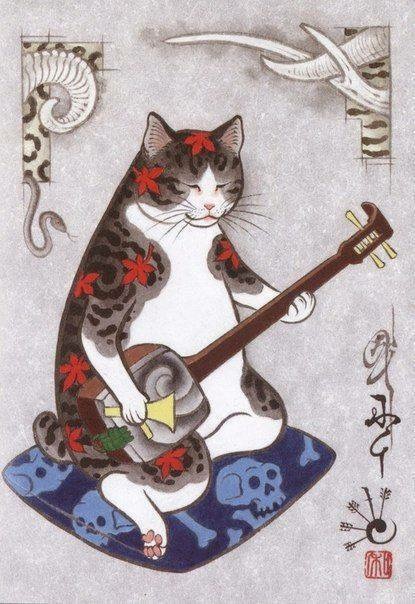 Here’s a nifty collection of oriental art portraits of cats engaging in all sorts of activities. Fun! 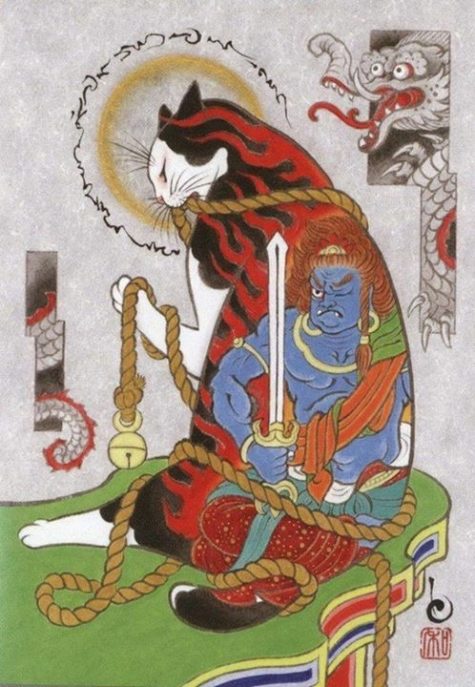 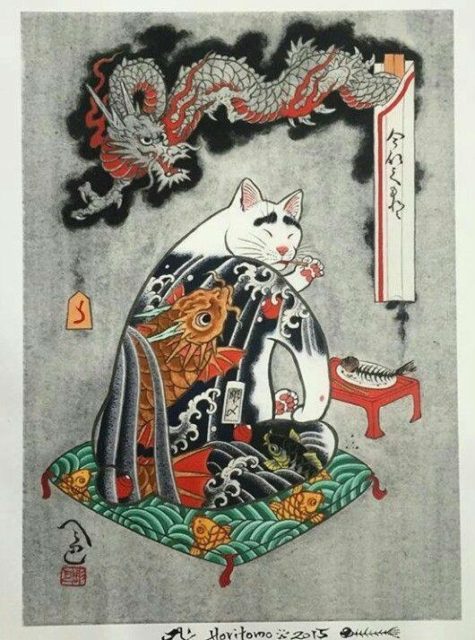 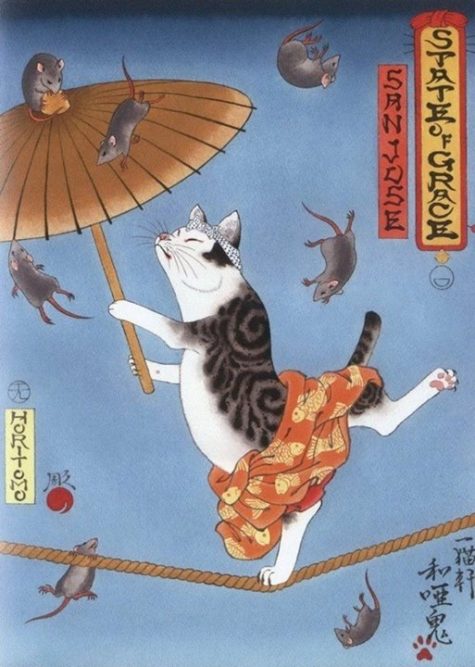 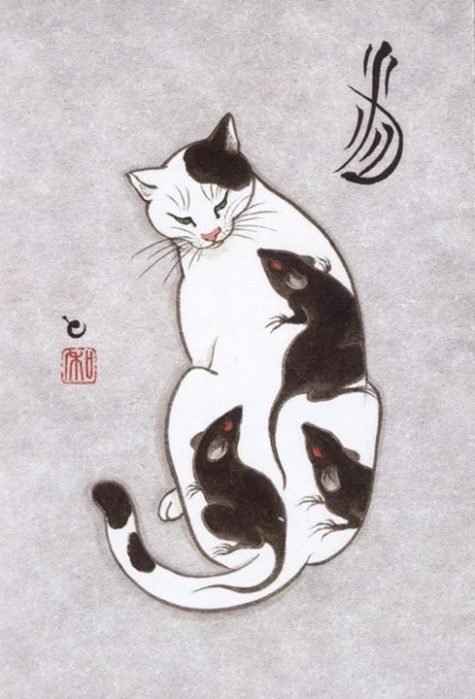 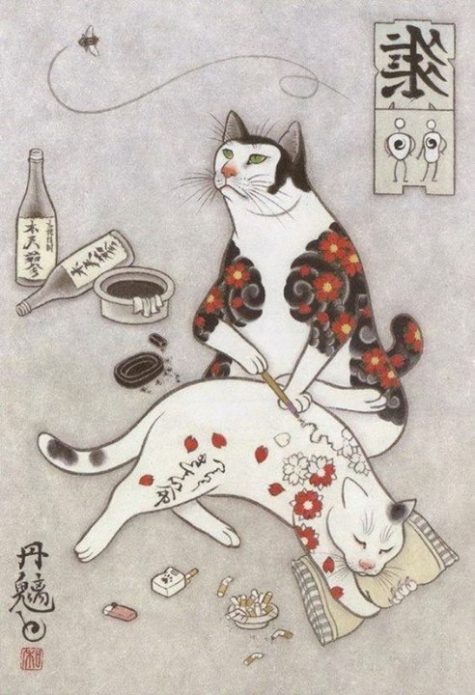 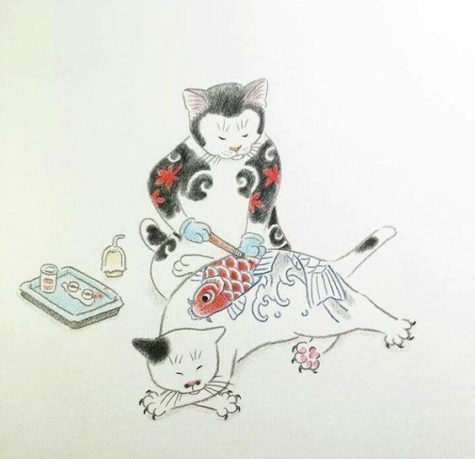 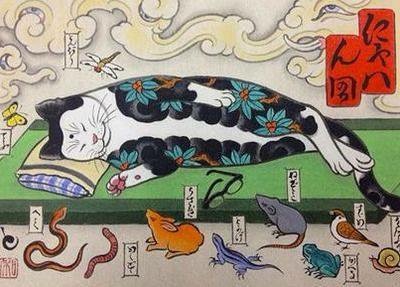 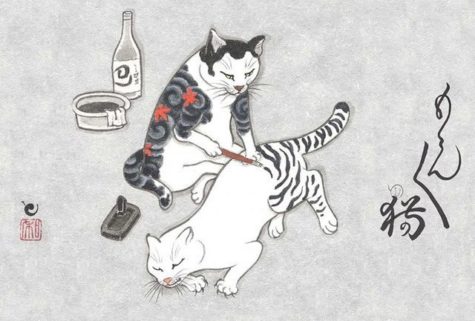