The Greedy and Ambitious Cat 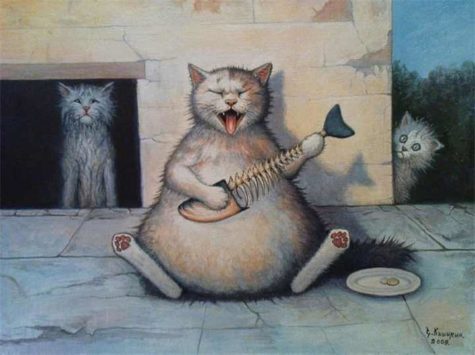 There was once an old woman who lived in a village. She was half-starved, extremely thin and meager and lived a thrifty life in a dark and gloomy little cottage. This miserable creature had as her only companion a cat as wretched and lean as herself. The cat never saw bread or other people and she had to make do with trying to catch the mice that left their paw prints on the dusty floor of the miserly dwelling.

If the cat was extraordinarily lucky and managed to catch a mouse, she was like a beggar that had discovered treasure. Her face and eyes lit up with joy and she made her treasure – the mouse – last a whole week! In fact she was so admiring of her luck and so distrustful of her own happiness that she said to herself, “Is this really happening or is it just a dream?” for the old woman and the cottage were so miserly that even the mice went elsewhere.

One day, the poor cat was half-dead from starvation and she climbed up onto the roof of the cottage in the hope of finding something to eat. From there she saw a neighbor’s cat walking along the neighbor’s wall as proudly as a lion and so fat that she could hardly walk. The old woman’s cat was astonished to see one of her own kind so plump and large.

In a loud voice, the thin cat called out to her pussy neighbor, “In the name of pity, tell me where you go to get your skin so well stuffed! Why, you look as if you came from one of the Khan of Kathai’s feasts!”

The fat cat replied “Where else should one feed so well but at a king’s table? I go to the house every day about dinnertime; there I lay my paws upon some delicious morsel or other, which serves me till the next. I leave enough for an army of mice, which under me live in peace and tranquility – after all, why should I murder a tough, stringy mouse, when I can easily dine on succulent venison?”

On hearing this, the thin cat asked the way to this house of plenty and begged her plump neighbour to take her with her next time.

“Most willingly,” said the fat cat, “there is plenty for all and I am naturally charitable and you are so thin that I heartily pity your condition.”

Having made the promise, the cats parted company and the thin cat returned to the old woman’s cottage where she told the old woman about the meeting with the fat cat and the plentiful food. The old woman prudently tried to persuade her cat not to go to the house of plenty and warned her to be careful of being deceived, “Believe me, the desires of greedy and ambitious people are never satisfied until their mouths are stuffed with the dirt of their graves. Sobriety and temperance are the only things that truly enrich people.” Said the old woman, “You poor silly cat! Those who travel to satisfy their greed and ambition don’t recognise the good things they already possess. Those who aren’t contented with their lot are never truly grateful for what they do have, but always want more.”

The poor starved cat, however, was so envious of the fat cat’s good fortune and of the king’s table, that the old woman’s good morals and judicious advice went in one ear and out the other. The next day, the thin cat went with the fat cat to the king’s house.

Alas! Before the cats arrived, the king had become weary of having his food stolen or spoiled by a plague of cats. The night before, several grimalkins had robbed the king’s larder and the king had ordered his servants to kill any cats that came near.

The old woman’s cat, however, was pushed on by hunger and entered the house. She immediately saw an unattended dish of meat in the kitchen and seized it. She took the stolen meat under the dresser and, for the first time in years, she filled her lean belly with good food. As she was enjoying the feast, one of the kitchen overseers found his breakfast had gone missing. Seeing the cat eating the stolen breakfast, he threw a knife at the poor creature. Unluckily for the cat, the knife struck her full in the breast.

However, nature had given the cat nine lives instead of one, and the poor puss feigned being dead until the overseer left. She then began to crawl away. Seeing her own blood flowing freely from her breast, the poor cat pledged “Just let me escape this mishap and should I ever become discontent with my own home and my own mice and come looking for morsels from the king’s kitchen then may i lose all of my nine lives at once!”

By Pilpay, an Oriental author circa 300 BC

This is pretty fun. The cat is like… huh? And the bird is… well… hey dude I”m taking this home!

Borrowed from: Hey It’s Me

Related Posts
The Greedy and Ambitious Cat
Procrastination
Why the Ashanti Cat Sleeps Inside
The Witch’s Cat
Search
Cat.egories