The Kitten and the Hungry Fox

This story is from a less kind and gentle time when foxes in farmyards were about as welcome as rats and robbers, and so the ending to the story was much more entertaining (and less horrifying) than it is now, when most of us think foxes are just as cute as kittens. 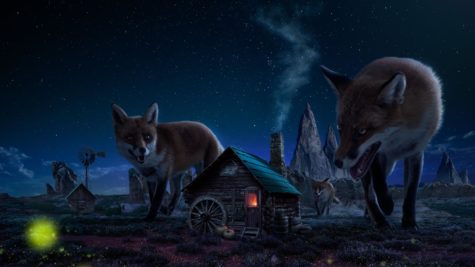 One night, a hungry fox came upon a kitten in a farmyard and decided that the kitten was exactly the right size for a meal.

“Please don’t eat me,” begged the kitten, “If you spare me, I’ll show you where the farmer hides his big rounds of cheese and you’ll get a much better meal than my poor skin and bones!”

“Look down there,” said the kitten, “That’s where the farmer hides his cheese. Look how big it is! There’s enough there for us to share if only you will fetch it, for I’m far too small to go down on my own.”

The fox looked down and saw, at the bottom of the well, a huge white creaming round of cheese. He began to drool in hunger and wanted the cheese all for himself, for not only was he hungry, he was also greedy and not of a mind to share the prize with the kitten. However, he made a play of being willing to share the cheese.

“But how can I reach it you tricksy little kitten?” the fox asked, “You have shown me the cheese, but not how to get to it!”

“If you sit in the bucket, I can lower you down to the cheese,” replied the kitten, “Then I can pull you and the cheese up and we can share the prize.”

“How do I know you won’t just leave me down there?” asked the suspicious fox, “We will both go down in the bucket, and both climb up with the cheese. That way I know you can’t trick me.”

So the fox and the kitten both went down the well in the bucket. As soon as the bucket hit the water, the great creamy round of cheese disappeared! The fox then realised that he had been tricked and that what he had taken to be cheese had been the moon’s reflection on the still surface of the water. Angrily, the fox turned to the kitten, determined to eat the trickster, but he was too late. As soon as the bucket had hit the water, the kitten had sped up the rope to freedom. The much heavier fox tried to climb the rope but succeeded only in pulling the rest of the rope into the well. Thus the kitten was saved and the hungry fox was drowned.

The Cat and The Rat

The cat has always and everywhere been the rat’s enemy, and according to Madagascan legend it was the rat who started it. 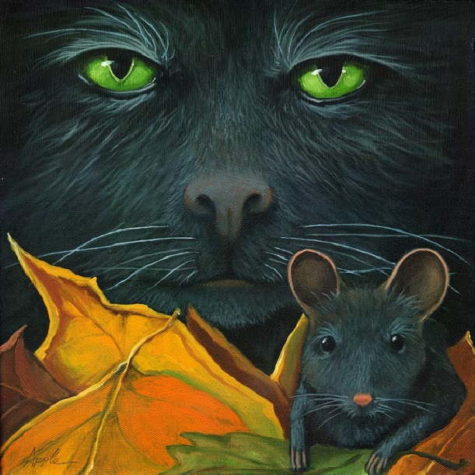 Once upon a time the cat and the rat lived in peace. One day, however, a great famine overtook them. There was nothing to eat, so they set off for a more fertile country. On the journey they came to the banks of a river too wide for them to swim across. Finding no driftwood to use as a raft, they dug up an enormous yam. The rat set to and hollowed it out with his teeth, making a canoe.

When the boat was ready they embarked, the cat paddling and the rat navigating from the stern. But the rat, having been born with an eternal hunger, soon began to eat the edges of the yam. The cat knew nothing of this until the canoe shipped water and began to sink. Then, too late, he realized that the rat had foolishly put both their lives in danger. He meditated on revenge. In the water the rat, weak with hunger and fatigue and about to drown, begged the cat for help.

“I will only help you,” said the cat, “if you agree to let me eat you when we reach land.”

Always having a trick in reserve, the cunning rat consented. When they reached the bank the rat said to the cat, “Wait till I am dry. While I am saturated you will not find me good to eat.” The cat believed him, and the rat used the delay to dig out a hole among some tree roots and hide. “Now I am dry,” he cried.