Your Sole Is Mine 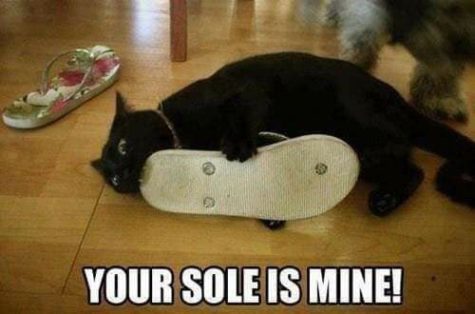 Kitties in the Cities 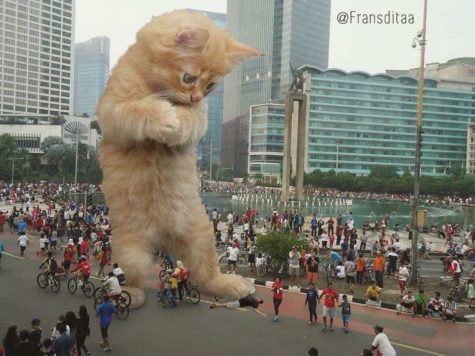 Oh my!
Now that would be one scary kitty! 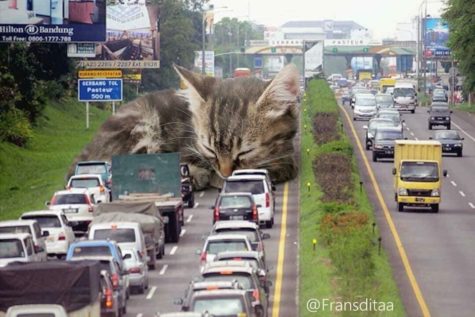 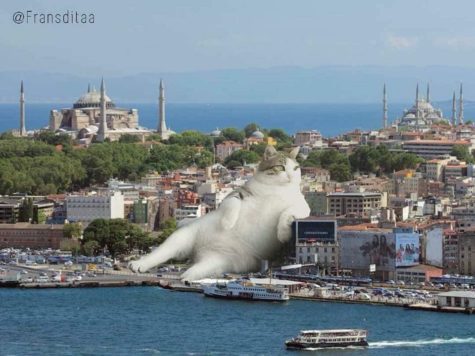 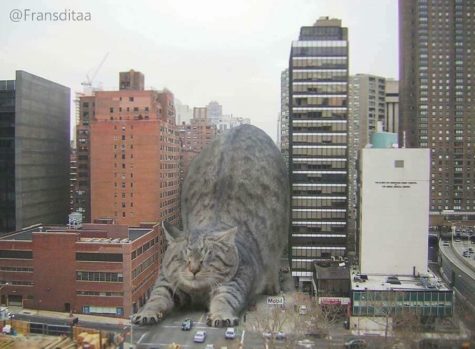 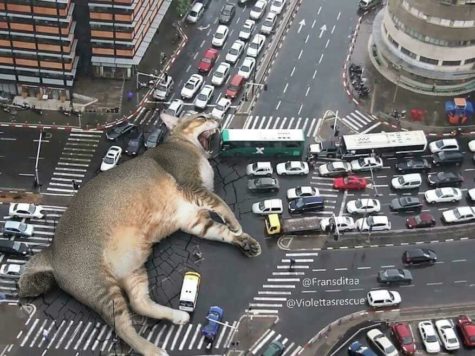 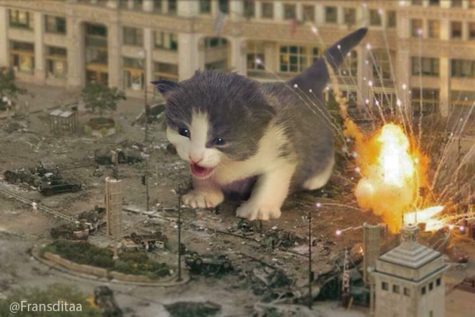 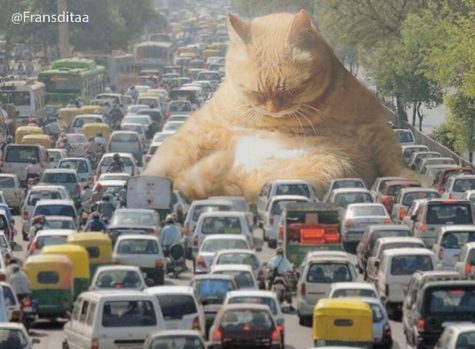 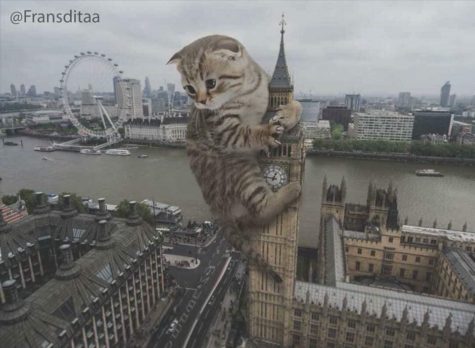 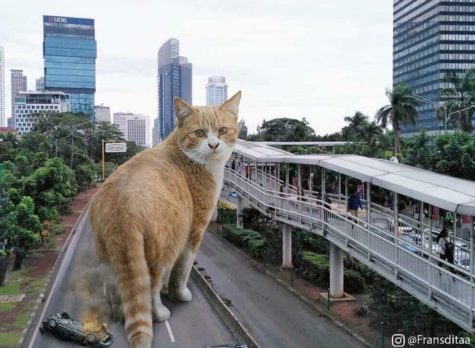 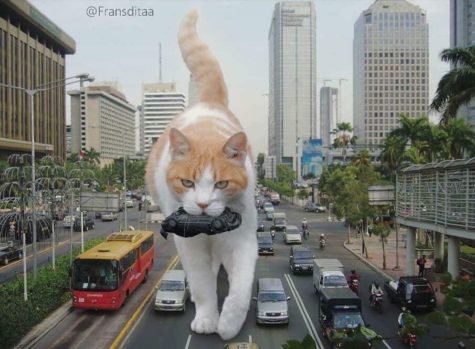 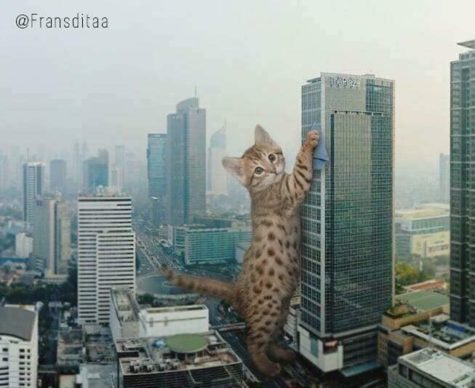 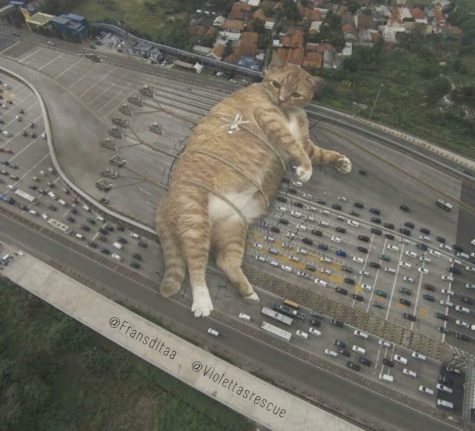 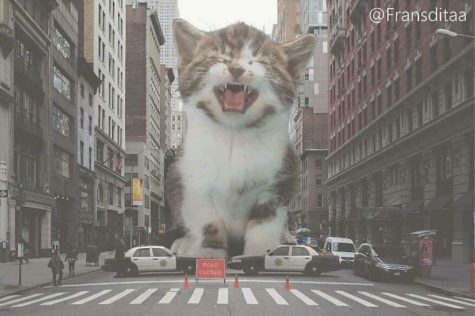 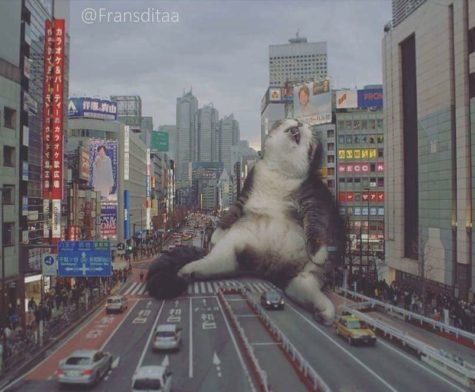 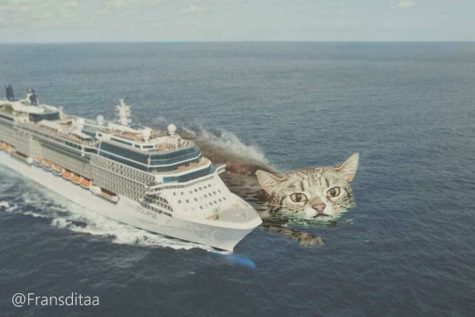 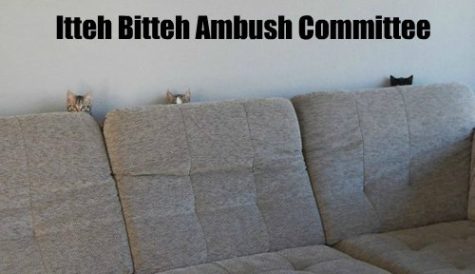 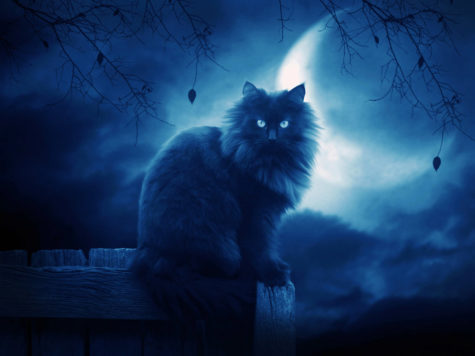 Found in Cats of Magic, Mythology, and Mystery, this is reputed to be a true story of the Horned Demon Cat of World War II. 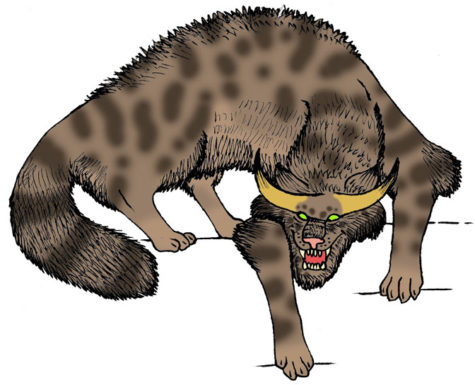 It could have been a scene enacted from Dante’s ‘Inferno’ – even the clouds seemed to be wreathed in flames as torrent after torrent of plummeting German bombs screamed through the darkened skies over south London, and danced a fiery tarantella of death upon its shuddering streets, like a flurry of shrieking souls in everlasting torment. And in the midst of this panorama of pandemonium was Howard Leland – one of many volunteers with the ARP (Air Raid Precautions) who had been boldly defying the deadly rain of missiles throughout that fearful evening in October 1943 in a desperate bid to minimize its malevolent effects. Little did Leland realize, however, that he would soon encounter something infinitely more sinister, and malign, than anything conjured forth by the wartime enemy.

As the ground reverberated from the intensity of yet another mighty explosion nearby, Leland ran into a deserted house to take shelter, until the immediate danger had passed. The building’s interior was pitch-black, but with the aid of his torch he located a staircase, and rested on the bottom step for a while, waiting for this latest airborne assault to end.

Suddenly, a cold shadow of fear swept across him, for as he sat there he realised – indefinably but undeniably – that he was no longer alone in that house. Something – not someone – else was here too, close by, and watching him. Unbidden, his eyes gazed upwards, to the top of the stairs, and the feeling intensified. Surely there, concealed amid the stygian gloom, was the source of his fear – and now he would reveal its identity.

Leland switched on his torch again, directing its penetrating beam onto the topmost stair – and beheld a hellish sight that transfixed him with fear, expelling from his mind all of that evening’s previous horrors in an instant. Crouched upon the stair was a huge hairy beast with tabby-like stripes of black and brown, clawed paws, and blazing eyes like glowed like twin infernos, mesmerizing Leland with their incandescent gaze. It would have resembled a monstrous cat – had it not been for the pair of sharp pointed horns that protruded from its skull! 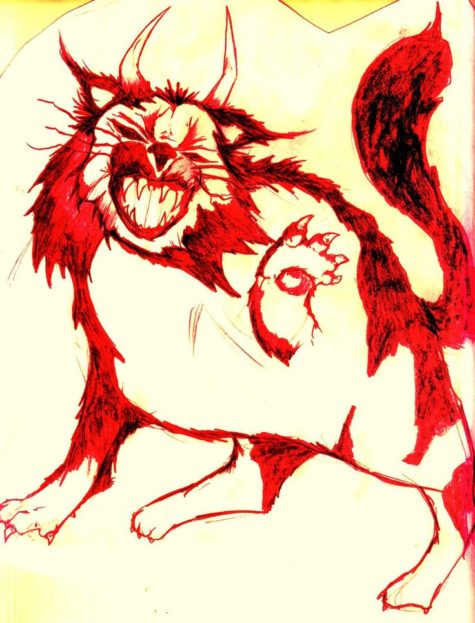 For almost a minute, Leland remained motionless, held in thrall by the cold aura of palpable evil that radiated inexorably from the beast’s unblinking eyes – and then it moved! With a single colossal leap, it sprang from the stair, plunging down into the shadowy room – but before it reached the ground, it had vanished. Yet its presence had not entirely gone – for Leland could plainly hear a spine-chilling yowling cry, echoing in the empty room.

At that same instant, however, the sound of human footsteps came from the open front door – and the spell was broken. The eldritch cries ceased immediately, and through the door walked two of Leland’s ARP comrades. Their reassuringly familiar forms and voices swiftly dispersed the shroud of terror that had encompassed Leland only moments before, and encouraged him to recount his chilling experience. Neither of his friends had heard anything when entering the house, however, so he did not expect them to treat his account seriously – which is why he was so surprised when they listened silently and with grave expressions throughout his story, making no attempt to scoff or scorn his words.

When Leland had finished, his friends informed him that he was not the first person to have spied the feline monster. On the contrary, it had been seen by many different eyewitnesses over a period of several years, and the sightings were always the same – an immense horned cat with demonic eyes, squatting at the top of the stairs.

Nevertheless, in the hope that a more straightforward explanation may be forthcoming, the three men walked up the stairs and searched everywhere thoroughly for any physical evidence of the creature’s reality, but nothing was found.

Still disturbed by the memory of this grotesque entity but anxious to uncover its identity and possible significance, two days later Leland visited a renowned clairvoyant, John Pendragon, and recalled to him his encounter. After listening intently, Pendragon located the house on a large map of London, then placed a forefinger on the precise spot marking it.

At once, Pendragon’s mind was filled with a whirling vista of cats – countless furry wraiths swirling all around at the top of the deserted house’s stairs in a screeching, spitting vortex of feline fury, a mad maelstrom of undying hate. And at its very centre was something much larger, but it was not a cat – not even a horned demon cat. It was a man – haggard and despairing, with a noose in his hand, about to place it around his own neck.

After describing this vision to Leland, Pendragon asked him to make enquiries among the house’s neighbours, to discover whether any details of its history and of its previous owners corresponded with those in his vision. A week later, Leland returned, bearing some extremely interesting (and vindicating) news.

One of the house’s former inhabitants had been an ardent practitioner of the black arts, in the vain hope of improving what he had perceived to be a wretched, unfulfilled life. In accordance with one particularly grisly ritual, he had routinely slaughtered numerous cats for sacrifice upon an unholy altar. Ultimately, the balance of his mind had become totally unhinged, and he had committed suicide – hanging himself with a noose, suspended from the banister at the top of the stairs. Shortly afterwards, the great horned cat was seen there for the first time, and spectral yowling cries have often been heard since too. 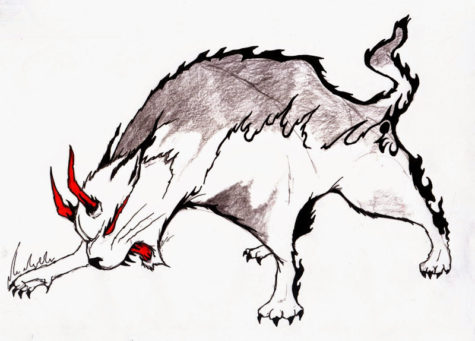 Was the horned demon cat an elemental?

When Leland asked his opinion as to this monster’s precise nature, Pendragon suggested that it was probably an elemental spirit – one whose feline appearance and vitriolic hatred had been created by the restless ghosts of the departed sorcerer’s many feline victims, and which would linger indefinitely in the grim locality where they had all met their terrible deaths.

Although the vast majority of Britain’s mystery cats are unquestionably exotic non-native cats that have escaped or have been deliberately released from captivity, or are simple misidentifications of common animals, some investigators have speculated whether a few of them may in reality be paranormal (zooform) entities ‘disguised’ as big cats – as would certainly seem to have been the case with London’s horned demon cat of World War Two.

Incidentally, it should be noted here that although the original source of this case was John Pendragon’s autobiography, Pendragon (1968), which was written in collaboration with paranormal mysteries writer-investigator Brad Steiger, it only contained a fairly brief account of events. However, Steiger’s own book, Bizarre Cats (1993), included a much more detailed, greatly expanded version as related to him by Pendragon, which not only emphasized the entity’s feline nature but also incorporated other noteworthy additional information – such as the full name of the eyewitness (merely referred to by his initials in Pendragon’s book), and the hideous cat-slaying rituals performed by the man who had subsequently committed suicide in the house where the horned demon cat was later seen.

Related Posts
The Kitten and the Hungry Fox
The Famous Patripatan
The Enchanted Watch
The Tale of the Tontlawald
Search
Cat.egories