The Sacred Cat of Burma

The sacred cat of Burma is not, as some might suppose, the Burmese, but is a breed known in the west as the Birman. A charming legend accompanies the Birman cat. 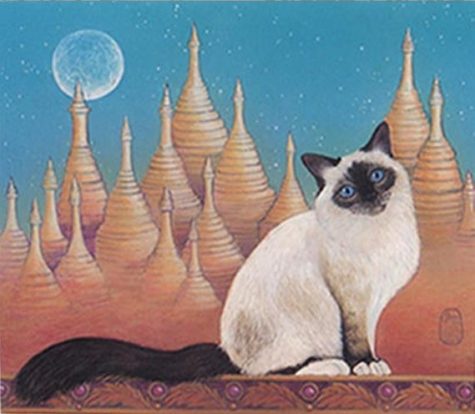 Many years ago, in a temple built on the side of the mountain of Lugh, there lived in prayer the very venerable Kittah Mun Ha, the great Lama precious amongst the precious, whose golden beard had been plaited by the god Song Hio himself. There was not one minute, not one look, not one thought of his existence that was not consecrated to the adoration, the contemplation, the pious service of Tsun Kyankze, the goddess with the eyes of sapphire. She presided over the transmigration of souls, which allows a Kittah to relive the span of his animal existence in the body of a sacred animal before he takes up a body haloed in the total perfection and holiness of the great priests.

Sitting in meditation beside Mun Ha was Sinh, his beloved oracle, a cat quite white with eyes of yellow, a yellow that reflected the golden beard of his master and the golden body of the goddess whose eyes were the color of the sky . . . Sinh, the counselor, whose ears, tail, nose and paws were the color of soil, a sign of the taint and impurity in everything that touches or can touch the earth.

Now, one evening, while a malevolent moon was permitting the enemy from Siam to approach the sacred place, the great priest Mun Ha entered softly into the state of death, with his divine cat at his side and under the despairing eyes of his overwhelmed Kittahs. it was then that the miracle took place . . . the unique miracle of the immediate transmigration.

With one bound, Sinh was on the golden throne, perched on the head of his departed master. He arched himself up on this head which, for the first time, no longer contemplated the goddess. And Sinh also became spellbound before the eternal statue, and the bristling hairs on his white spine suddenly become the yellow of gold. And his golden eyes became blue, huge and profound like the eyes of the goddess.

And as he turned his head gently towards the South door, his four paws, touching the venerable skull, became a blinding white. And as his eyes stared at the Southern door, the Kittahs obeyed the expression in the eyes that were charged with hardness and with light. They threw themselves against the heavy bronze doors and against the first of the invaders.

The temple was saved from profanation and pillage. Sinh, however, had not left the throne. He did not move for seven days, but on the seventh day, steadily facing the goddess and with his eyes on her eyes, he died, hieratic and mysterious, carrying towards Tsun Kiankze the soul of Mun Ha, from then on too perfect for this earth. And when, seven days later, the priests gathered before the statue to consult among themselves on the succession to Mun Ha, all the cats of the temple came running – and all were clothed in gold and gloved in white, and the yellow of all those eyes had been changed to a deep sapphire blue. In silence they all surrounded the youngest of the Kittahs, who was designated in this way by the will of the goddess.

‘From that day, if a sacred cat should die in the temple of Lao-Tsun, it is the soul of a Kittah that takes its place for ever in the paradise of Song Hio, and the golden god. 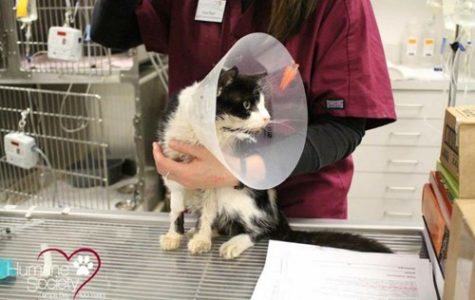 Bart the cat was hit by a car in Tampa, Florida on January 17 and thought to be dead by his owner in Florida. He was found in the street in a pool of blood and buried.

Five days later, he showed up in their neighbor’s yard very much alive.

“I saw him with my own eyes. I know he was dead. He was cold and stiff,” the neighbor told ABC News.

They took him to the vet after his “resurrection” (maybe they should have done this before burying him?) where he was treated for a broken jaw, open facial wounds and a ruined eye.

“We have seen many amazing cases at our full-service veterinary clinic,” wrote the Humane Society of Tampa on its website. “But this situation may take the cake!”

A GoFundMe page was set up by the neighbor to raise money for Bart’s medical costs. The Humane Society posted an updated on his condition on Facebook.

Bart The Miracle Cat has successful surgery! He was a brave boy and is now resting comfortably. He is spending the night with our good friends at Tampa Bay Veterinary Emergency Service so he can be monitored. He will return to us in the morning and need a week or so to recover before going back home!

Note: This is old news, happened back in 2015… but still interesting!

Via The Daily What