Mau Comes Into Being 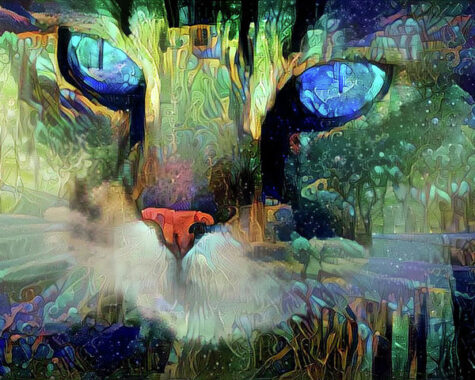 There was a day when darkness gathered itself into a hungry snake and crawled upon the earth. On her belly she crept toward the city of light, swallowing whatever lay in her path: Men and women, beasts, vegetables and Gods. And no thing that touched her lips escaped her, for all matter was lost in the darkness.

That was the day, or rather the night, that Ra left the sky and took his shape in the cat. To fool the snake, he slept under the leathery leaves of the laurel, holding in his strength, stirring only once for a single languid lick of his paws to brush against his whiskers.

Seeing the cat ~ that tasty bit of flesh, the snake slithered over and opened its mouth. On the other side of her teeth swelled the void, the abyss, the great nothing, and from it issued the cries of all the lost things of creation. Their voices were a wailing wind that beckoned from the darkness.

Then the soul of Ra in the form of a tiny cat leapt up beneath the shade of the laurel and, with teeth of iron and gold, he snapped off the head of the snake and sliced its body into a thousand pieces and swallowed them up.

Blood from the snake’s mouth spilled onto the ground. In that manner Ra’s creations returned to earth. The blood seeped into the ground and was taken up by the thirsty laurel, which burst into bloom with the souls of the dead in the shape of yellow flowers.

Now leaning down from the east edge of heaven, the God of words had witnessed the battle. He had felt each puncture of the snake’s teeth upon his own throat and praised the cat which had given its shape to Ra.

“How like the God that made him is the radiant cat. How he slew the darkness with his mouth!” And Mau became the cat’s name and the God gave him words of power.

Related Posts
The Kitten and the Hungry Fox
The Tale of the Tontlawald
The Witch’s Cat
Androcles and the Lion
Popular Posts
Search
Cat.egories