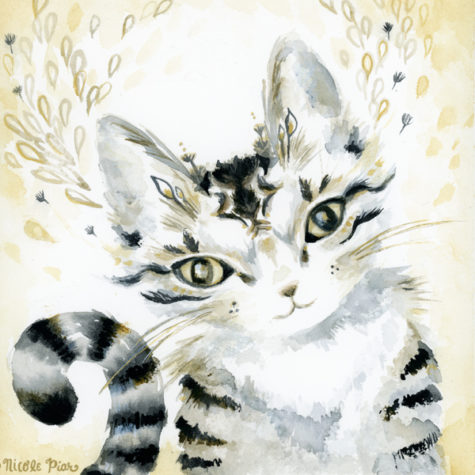 Once upon a time there was a peasant whose wife had died and left him with two children; a twin boy and a twin girl. He decided to marry again and over the next few years his new wife had several children of her own, but she neglected and beat the twins and wanted nothing better than to get rid of them. Finally, she had a wicked thought and decided to send them out into the great gloomy wood where a wicked witch lived.

One morning she told the twins, “You have been such good children that I am sending you to visit my granny, who lives in a dear little hut in the wood. You will have to wait upon her and serve her, but she will give you the best of everything in return.”

The children left the house together, but the little sister said to her brother, “First we will visit own dear grandmother and tell her where our step-mother is sending us.” Which they did.

Their grandmother cried, “I wish I could help you, but I am old and poor. Your step-mother is sending you to the wicked witch of the wood. Listen to me – be civil and kind to everyone, never say a cross word to anyone and never touch a crumb belonging to anyone else. Help may be sent to you after all.”

She gave them a bottle of milk, some ham and a loaf of bread and they set out for the wood. There they saw a queer little hut and knocked on the door.

“Who’s there?”‘ snarled the witch in an awful voice.

“Good-morning, granny. Our step-mother has sent us to wait upon you, and serve you.”

“If I am pleased with you, I’ll reward you. If not, I’ll cook you in my oven! See that you work hard!” growled the witch.

She set the girl down to spin yarn and she gave the boy a sieve in which to carry water from the well, then she herself went out into the wood. The girl sat weeping at the spinning wheel because she didn’t know how to spin. Presently she heard the pattering of hundreds of little feet, and from every hole in the hut mice came squeaking: “Don’t cry little girl. We’ll help you if you give us some of your bread.”

The girl gave them some the bread and the mice began to spin the yarn. The mice told her that the witch’s grey cat would tell her how to escape if she gave it some of her ham. She went to find the cat, but instead she found her brother sobbing because the water kept running out of the sieve. Then they heard rustling wings and a flight of wrens alighted and said said, “If you give us some crumbs we’ll help you keep that water in the sieve.”

So they gave their remaining crumbs of bread to the wrens and the wrens showed the boy how to fill the holes of the sieve with clay to make it water-tight. They carried the water inside the hut without spilling a drop. Inside the hut they found the cat curled up on the floor, so they stroked her and gave her some ham and asked, “Pussy, grey pussy, how are we to get away from the witch?”

The cat thanked them for the ham and gave them a handkerchief and a comb. She told them that when the witch chased them, as she certainly would, they must throw the handkerchief on the ground and run as fast as they could. As soon as the handkerchief touched the ground, a deep broad river would spring up to hinder the witch’s progress. If the witch managed to cross the river, they must throw the comb behind them and run for their lives, for where the comb fell a dense forest would start up, which would delay the witch so long that they would be able to get safely away. The cat had scarcely finished speaking when the witch returned.

“You have done your work well enough for today,” she grumbled, “but tomorrow you’ll have something more difficult to do, and if you fail it will be straight into the oven with you.”

The terrified children barely slept a wink on their pile of straw. In the morning the witch gave the girl two pieces of linen to weave before night, and gave the boy a pile of wood to cut into chips. Then she went out into the wood. As soon as she was out of sight, the children took the comb and handkerchief and ran hand-in-hand away from the hut.

First they met the witch’s fierce watch-dog, but they threw their remaining bread and ham to him and he let them go past. Then they were hindered by the tangled birch-trees, but little sister tied the twigs together with her ribbons, and they passed safely. At last they reached open fields. Meanwhile, the cat was busy weaving the linen and tangling the threads as it wove. When the witch returned to see how the children were getting on she crept up to the window and whispered, “Are you weaving, my little dear?”

“Yes, granny, I am weaving,” answered the cat.

The cat hissed, “I have served you all these years and you never even threw me a bone, but the dear children gave me their own piece of ham.”

Then the witch was furious with the watch-dog and with the birch-trees for letting the children escape. The dog told her “I have served you all these years and you never gave me so much as a hard crust, but the dear children gave me bread and ham.” The birch tree rustled its leaves and said “I have served you longer than I can say with twigs for your broom, and you never tied a bit of twine even round my branches, but the dear children bound them up with bright ribbons.”

The witch mounted on her broom and set off after the children, her broom sweeping the ground as it went. The children heard the sound of the broom close behind them and they threw the handkerchief over their shoulder. In an instant, a deep, broad river flowed behind them. It took the witch a long time to find a safe place to cross, but at last she found a place and she chased faster than before. When the children heard the broom behind them, they threw the comb down on the ground. In an instant, as the witch’s cat had promised, a dense forest sprung up. It was so thick and tangled that the witch found there was nothing for it but to turn round and go back to her hut.

The twins ran until they reached their own home where they told their father what had happened. In anger, he drove their step-mother out of the house forever and he never again let a stranger into the house.