The War of the Wolf and the Fox 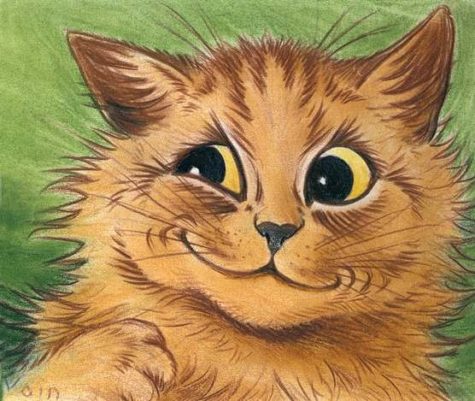 There was once a man called Simon and his wife, Susan, who had an old cat and an old dog.

One day Simon said to his wife “Why should we keep our old cat any longer? She never catches any mice and is so useless that I should drown her.”

His wife replied, “Don’t do that; I’m sure she could still catch mice.”

“Rubbish,” replied her husband “The mice could dance on her and she’d never catch one. As soon as i find her i shall drown her.”

Susan was most unhappy about this and so was the old cat, who had been hiding behind the stove and had overheard the conversation. When Simon went off to work, the poor cat meowed so pitifully, and looked up so pathetically at Susan that the woman opened the door and told the cat to flee for her life before Simon returned home.

The poor old cat ran as quickly as her old legs would carry her into the wood, and when Simon came home for dinner, his wife told him that the cat had gone missing and had probably crawled away to die of old age.

“So much the better,” her husband said, “It saves me the bother of drowning her. However, what are we to do with the old dog? He is deaf and nearly blind; he barks when there is no need, and he fails to bark when there is need. The best thing I can do with him is to hang him.”

Soft-hearted Susan replied, “Please don’t. I’m sure he’s not as useless as you think.”

But her husband just retorted “The yard could be full of thieves and he’d never discover it. As soon as I find him he shall be hanged and we’ll be rid of him.”

Susan was most unhappy at his words, and so was the dog, who had been hiding under a chair in the corner of the room and who had heard everything. As soon as Simon had gone back to work, the old dog stood up and howled so touchingly that Susan quickly opened the door and told the dog to flee for his life.

The poor old dog fled into the wood with his tail between his legs and when Simon returned, his wife told him that the dog had run off.

“That’s lucky for him and lucky for me for it saves me the bother of tying a rope to hang him with,” said Simon.

Susan sighed, for she had been very fond of the dog and the cat and there was now no-one at home to keep her company while Simon was at work.

It happened that the cat and dog met each other in the woods and though they had not been the best of friends at home, having kept to their own tasks, they were glad of each other’s company. They sat down under a holly tree and told each other the tale of how they had ended up turned out of home.

Presently a fox passed by. Seeing the pair sitting together so sadly, the fox asked what they were grumbling about and why they were so sad.

The cat replied, “I have caught many mice in my day, but now that I am old and tired, my master wants to drown me and be rid of the trouble of feeding me.”

The dog said, “Many a night have I watched and guarded my master’s house, but now that I am old and deaf, he says I am no more use and he wants to hang me and be done with me.”

The fox answered, “That’s the way of humankind, ungrateful creatures that they are. I’ll help you to get back into your master’s favor if you first help me in my own troubles.”

The dog and cat promised to do their best, and the fox continued, “The wolf has declared war against me. He is at this moment marching to meet me in company with the bear and the wild boar, and tomorrow there will be a fierce battle between us. I need staunch comrades to stand against the wolf with me.”

“All right,” said the dog and the cat, “we will stand by you. If we are killed, as we are sure to be, it is at any rate better to die on the field of battle than to perish ignobly at home, drowned like a witch and hanged like a thief.”

The fox sent word to the wolf to meet him at a certain place, and the fox, dog and cat set forth to the appointed place. The wolf, the bear and the wild boar arrived on the spot first. When they had waited some time for the fox, the dog, and the cat, the bear said, “I’ll climb up into the oak tree and see if they are coming.”

The first two times, the bear saw nothing, but on the third time of looking, the bear said “I see a mighty army in the distance, and one of the warriors has the biggest lance you ever saw!”

This was the cat, who was marching along with her tail erect. So they laughed and jeered and the bear said, “The enemy won’t be here at this rate for many hours to come, so I’ll just curl myself up in the fork of the tree and have a nap.”

Seeing the bear napping, the wolf curled up at the foot of the tree to nap as well. The boar buried himself in loose leaves until only one ear was visible.

By and by, the fox, the cat and the dog arrived. When the cat saw the boar’s ear, she pounced upon it, thinking it was a mouse in the leaves. The boar was so pained and startled that he fled squealing in terror. The poor old cat was even more startled and, spitting with terror, she scrambled up into the fork of the tree, and right into the bear’s face.

The bear was just as startled as the boar. Growling and swiping with his paws, he lost his balance and fell out of the tree. He landed on the wolf and killed it stone dead. The wolf died with such a yelp that the bear ran off into the woods, certain a whole army of foxes was after him.

The bargain having been kept, the fox told the dog and the cat to take him to the cottage where they had lived with Simon and Susan. On their way there, the fox caught a score of mice. When they reached the cottage he put them all on the stove and said to the cat, “Now go and fetch one mouse after the other and lay them down before your master.”

The cat did exactly as the fox told her and when Susan saw this she said to her husband, “Our old cat has returned home and what a lot of mice she has caught!.”

“Perhaps she is not so useless after all,” said Simon, “I never thought the old cat would ever catch another mouse.”

His wife replied “I always said our cat was an excellent creature, but you men always think you know best.”

Meanwhile, the fox said to the dog, “Your master has just killed a pig. When it gets a little darker, you must go into the courtyard and bark with all your might.”

As soon as it was dusk, the old dog began to bark loudly.

Susan said to her husband, “Our dog must have come back – I hear him barking with all his might. Do go out and see what’s the matter – perhaps thieves are stealing our sausages.”

But Simon answered, “The old brute is as deaf as a post and is always barking at nothing,” and he refused to go and find out what was happening.

The next morning, Susan got up early to go to town, and she thought she would take some sausages to her aunt who lived there. When she went to her larder, she found all the sausages gone and a great hole in the floor. She called out to her husband, “I was right after all. Thieves have been here last night, and they have not left a single sausage. Oh! if you had only got up to see what our old dog was barking at when I asked you to!”

Simon scratched his head and said, “maybe he’s not so useless after all. I never believed the old dog was so quick at hearing.”

His wife replied, “I always told you our old dog was the best dog in the world, but as usual you thought you knew so much better. You men always think you know best.”

So the dog and the cat settled back into their home and every time Simon suggested they were not earning their keep, his wife would stare at him until he admitted that the animals were not so useless after all. And the fox scored a point too, for he had carried away the sausages.

Related Posts
The Cactus Cat
Why the Ashanti Cat Sleeps Inside
The Cat and The Rat
The Bronze Ring
Popular Posts
Search
Cat.egories